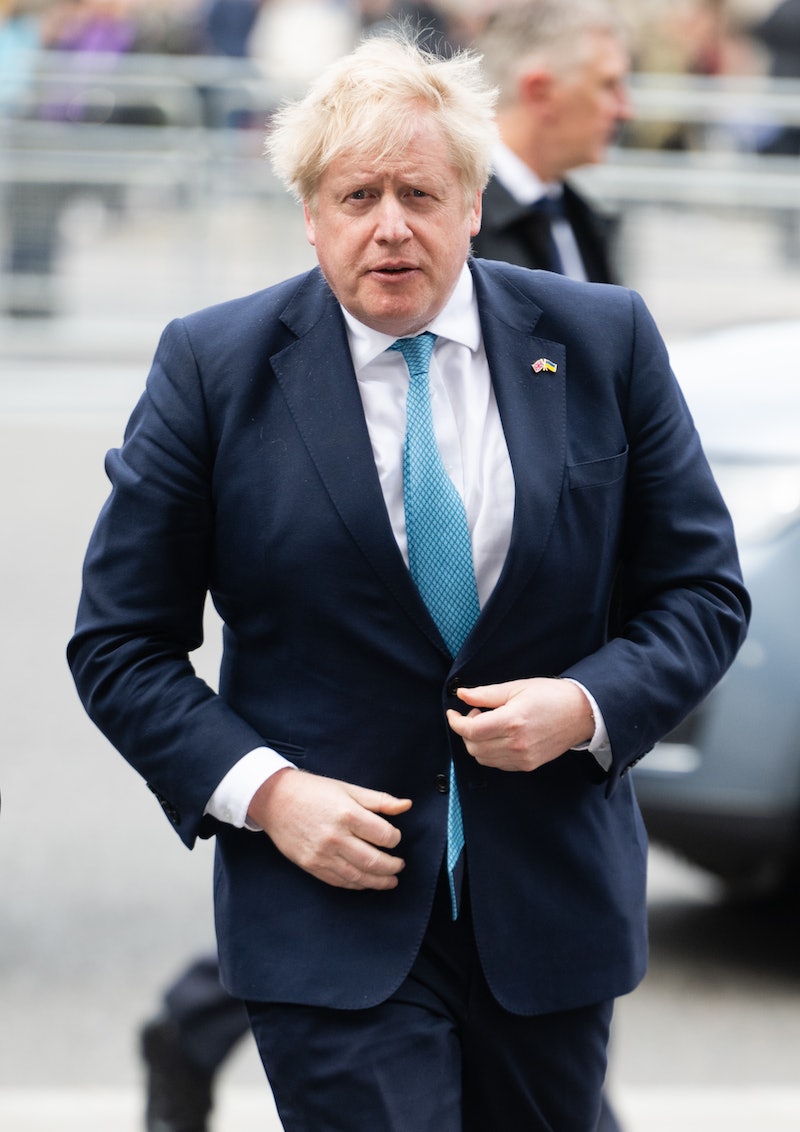 It’s no great secret that the Conservative Party has a serious problem when it comes to trans rights. Many senior MPs and cabinet ministers have expressed their anti-trans views on-record, after all. And that includes the Prime Minister, Boris Johnson. With discussions around trans rights in politics growing in momentum, we’re hearing a lot more anti-trans rhetoric from Johnson and his government. On Mar. 30, Johnson praised the courage of the first British MP to come out as trans, Tory MP Jamie Wallis. Hours after reportedly joking about gender identity in a room full of Tories at a party dinner.

However, even some of Boris’ own party members are now speaking out against his strong stance. Writing for The Times, Conservative MP Alicia Kearns described her own party’s trans-exclusionary conversion therapy ban as “abhorrent,” adding that the trans community “deserves an apology.”

However, Johnson remains firm on his views, and on May 10, the government committed to their trans-exclusionary conversion therapy plans during the State Opening of Parliament.

The government’s actions also appear to have had repercussions on a global scale, and a recent report showed that the UK had fallen out of the top 10 most LGBTQ+ friendly European nations.

Here are ten recent examples of where Boris Johnson has got it wrong on trans rights.

“We must recognise when people want to make a transition in their lives that they should be treated with the maximum possible generosity and respect, but I think that when it comes to distinguishing between a man and a woman that basic facts of biology remain overwhelmingly important,” Boris Johnson said during Prime Minister’s Questions in Mar. 2022, wading into the poisonous debate around trans rights currently taking place in the UK.

Taking a stance that appears to be at odds with Labour leader Keir Starmer’s statement that “trans women are women”, Johnson instead suggested that he sides with those who believe that a person’s sex is an immutable fact (a viewpoint that erases the experiences of intersex people, for a start) and those who believe that sex-based rights are under threat from trans rights.

“We believe it is in everyone’s interest to not attach so much weight to biology when discussing trans matters,” said the charity Mermaids in response. “Sex rights and trans rights are not at odds with one another.”

On His Lack Of Commitment To Trans-Inclusive Healthcare

During an interview on GB News in 2021, Johnson was asked to weigh in on remarks made by Starmer, who stated it was wrong to say that only women have a cervix. Starmer was referring to using inclusive terminology when it comes to healthcare.

Trans men and/or non-binary people born with cervixes face a number of additional barriers when it comes to accessing cervical screenings. A study published recently found that a “lack of information, gender dysphoria and experienced or anticipated discrimination contribute to low attendance with over a third unaware that those registered male with their GP will not be automatically invited for this potentially life-saving test.”

When asked to give his own views, Johnson dodged the question. “What I think about this is biology is very important,” he said, before adding that people should be allowed to change gender, and that “everybody should be treated with dignity and respect.” His answer didn’t exactly engage with the real issues at hand.

Breaking A Promise To Reform The GRA

Despite his predecessor Theresa May promising to overhaul the Gender Recognition Act, Johnson’s government has failed to act. Despite a public consultation being overwhelmingly in favour of reform – 75% of respondents backed removing the current requirement to prove you have lived in your new gender for two years – no further action has been taken since. As reported by the BBC in 2020, some trans people in the UK have had to wait up to three years for their very first appointment with an NHS Gender Identity Clinic, and transitioning is currently a complex and expensive process in the UK.

His Support For The LGB Alliance

When Johnson commended LGB Alliance on their “incredible hard work” and voiced his support for their trustee Kathleen Stock – an academic who resigned from Sussex University after students accused her of “institutional transphobia” – the Prime Minister effectively endorsed both Stock and LGB Alliance’s gender critical views.

The organisation opposes changes to the Gender Recognition Act which would streamline the process of accessing support for trans people, and is against trans-inclusive education in schools. LGB Alliance has also claimed that “affirming a gender non-conforming child as trans, who would otherwise grow up to be lesbian, gay or bisexual, is itself a form of conversion therapy”.

The Number Of Anti-Trans Conservatives In The Party

Johnson’s own equalities minister Kemi Badenoch has been caught on leaked audio misgendering trans women and using language that is considered offensive by many trans people. “It’s no longer about minority rights in terms of race any more or nationality,” Badenoch can be heard saying in the recording, “It’s now, you know like, it’s not even about sexuality now, it’s now like the whole transgender movement, where, OK well we’ve got gay marriage, and civil partnerships, so what are transsexuals looking for?”

Whilst serving as Johnson’s Minister for Women and Equalities, Liz Truss also advocated for the “protection of single-sex spaces” and suggested that young trans people were still “developing their decision-making capabilities” and should be protected “making those irreversible decisions”. A study into the experiences of transgender children by Goldsmiths University, meanwhile, found “high levels of mental distress” were caused by “excessive waiting times for support; direct discrimination within healthcare settings; and a lack of attention or interest from healthcare providers in listening to the voice and expertise of the children and parents involved”.

In 2021, Johnson’s Tories were also condemned for inviting LGB Alliance to host a stand at their party conference. The annual event also featured a reading by Helen Joyce – a cis woman who labeled trans campaigners as a “new state religion” – and a panel hosted by Tory Baroness Emma Nicholson, who recently attempted to revoke current NHS guidance around placing trans patients on hospital wards that align with their gender. Nicholson’s panel featured groups such as Keep Prisons Single Sex, which opposes trans women being housed in the appropriate prisons, and Fair Play for Women, who campaign to stop trans women from competing in women’s sports.

The Mass Resignations Of LGBT Advisors

In the wake of Truss and Badenoch’s comments regarding trans people, three of the government’s key LGBT advidors resigned, accusing the government of creating a hostile environment for queer people, and lacking real knowledge of the issues at hand. “It doesn’t appear that they’re doing anything useful or helpful for trans people in terms of government policy,” former LGBT advisory panel member James Morton told the BBC.

TransgenderNI’s executive director Ellen Murray also quit, tweeting: “There’s precious little patience I have left for the government at this point, but with what remains: get your act together. Use the panel for what it was intended and actually prohibit conversion therapy. Stop deporting LGBT refugees. Drop the trans culture war.” Jayne Ozanne also resigned, labelling Truss and Badenoch “the ‘ministers for inequality’”.

His Comments On Trans-Inclusive Sport

When asked about his views on trans-inclusive sports, the Prime Minister told Sky News on April 6 that he doesn’t think “biological males should be competing in female sporting events.” Johnson continued, “maybe that’s a controversial thing to say, but it just seems to me to be sensible.”

Responding to the Prime Minister’s remarks, Richard Hearne, the founder of Pride Out, criticised Johnson’s “off-the-cuff” comments as “divisive.”

“Despite thorough scientific evidence concerning trans participation in sport by experts over many years, it appears that some people simply don’t want to entertain the idea of trans people being able to participate in sport,” Hearne told PinkNews.

In April 2022, the government announced that it would proceed with a ban on conversion therapy in England and Wales that would not cover transgender people. The government’s plans prompted backlash from members of Johnson’s own party, including the Conservative MP for Bridgend, Jamie Wallis, who said that he was “bitterly disappointed at the Government’s decision not to include gender identity in the ban on conversion therapy.”

As per the BBC, the announcement also sparked large protests outside Downing Street and saw more than 100 LGBTQ+ groups cut ties with the government-sanctioned Safe To Be Me: A Global Equality Conference, which was subsequently cancelled.

An online petition was also created and pushed to ensure “trans people are fully protected under any conversion therapy ban.” The likes of Derry Girls’ Nicola Coughlan lent their support to the petition, which has gained almost 145,000 signatures at the time of going to press.

The government claim that their proposed conversion therapy ban, which will be brought forward in parliament in 2022, “will protect under-18s, regardless of circumstance, and over-18s who do not consent and who are coerced or forced to undergo conversion therapy practices.”

UK Falls Down The Rankings Of Europe’s LGBTQ+ Friendly Nations

The LGBTQ+ advocacy group ILGA-Europe released their ranking of 49 European countries based on LGBTQ+ rights, equality, and tolerance as part of their annual Rainbow Map review.

In 2022, the UK slipped to 14th place in the listing, dropping four places lower than the year prior. As per PinkNews, the ILGA-Europe report stated that the UK government’s failure to reform gender recognition laws and their trans-exclusionary stance on conversion therapy contributed to the UK’s fall in the ranking.

The advocacy group also stated that transphobic rhetoric in the UK media “continued to cause serious damage,” naming the BBC specifically, who the group alleges has published “transphobic articles” and released a “smear podcast series on Stonewall.”

“The situation in the UK is a sad reminder that when governments don’t stand strong on their commitments to advance minority rights, a powerful opposition can use that space to spread hate and division,” advocacy director of ILGA-Europe, Katrin Hugendubel, said of the 2022 report.

Elsewhere, a former LGBTQ+ to the UK government, Jayne Ozanne, told PinkNews that the UK “should hang its head in shame.”

More like this
Jake Daniels Just Became The UK’s First Active Football Player To Come Out As Gay Since 1990
By Sam Ramsden
LGBT+ Men Fleeing Afghanistan Were Denied Asylum By The Home Office, New Findings Show
By Sam Ramsden
Yomi Adegoke On The Offline Diaries & The Power Of Representation
By Jessica Morgan
The Music Industry Continues To Fail Black Women
By Precious Adesina
Get The Very Best Of Bustle/UK

This article was originally published on March 30, 2022