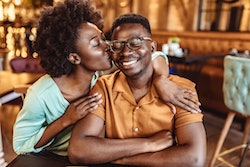 If the zodiac signs were high school students, Aries would be the all-star athlete, while Pisces is the award-winning artist. You wouldn’t really find them running in the same circle. In many ways, Aries and Pisces seem way too different to work. The zodiac’s ram is pure fiery Mars energy. They’re assertive, outgoing, competitive, and have a strong presence to them. As a cardinal sign, they tend to be self-starters. Pisces, on the other hand, is ruled by Neptune. By nature, they’re sensitive, gentle, and tend to live with their head in the clouds. As a mutable sign, they tend to go with the flow. But these two zodiac signs actually have a lot more in common than you might think. Aries and Pisces compatibility will tell you what you need to know about this fire and water sign’s relationship potential.

“Water and fire are not always known for being a good match when you consider that water (Pisces) extinguishes fire (Aries),” astrologer Arriana Fox tells Bustle. “But remember, water and heat can bring up a great boil of passion and intensity. They are an exciting combination considering that each sign tends to have depths that we don’t often think of right away.”

Getting a relationship off the ground will be the first major challenge between these two. According to astrologer Clarisse Monahan, “Pisces being Jupiter-ruled tends to be the eternal [optimist], while Aries governed by Mars can be more of a realist. Aries is a sign which very much celebrates the self, the individual, and the ego, and Pisces likes to celebrate the breaking down of these categories in favor of ecstatic communion.”

Even if they find each other attractive at first or start hooking up, it may take a while for them to realize they can have something more solid. Forming a real emotional connection that will lead to a lasting relationship will require some work. Aries is a very proud sign and hates showing any vulnerability or weaknesses, while Pisces is emotional but tends to bottle up their feelings.

If they can establish a solid foundation of trust early on, this can be an emotionally compatible relationship for both signs. Fox says that the emotional depth between them has the potential to be very “powerful.” Read on to find out more about Aries and Pisces compatibility.

When it comes to sexual compatibility, these two complement each other pretty well. Pisces will bring depth and romance, and Aries will bring passion and intensity. “They can blend when they use their traits to grow closer rather than apart,” Fox says. “Pisces will connect Aries to their heart, and Aries will arouse the passions that lay within Pisces, as they have a strong sexual side.” Sex and pleasure are important for both signs. They’ll teach other “new tricks” that will help keep each other hooked on to the relationship.

The zodiac’s all-star athlete and the award-winning artist may not seem like they’d have anything in common, but they actually make a great combination as friends. According to Michelle Welch and Ashlie Daniel, astrologers with SoulTopia, LLC, Aries is a go-getter fire sign who likes to take the lead, which is a good match for the more indecisive Pisces. “This water sign can struggle with making decisions, so you having a friend like Aries is a relief,” they say. You won’t find these two going back and forth about what they’re going to do next weekend or what they’re going to get for lunch.

Pisces goes with the flow and is known for having a “soothing, stable demeanor.” The ram will find their energy comforting and will feel like they have a place where they can unwind and truly relax. According to Welch and Daniel, Pisces can help Aries find balance.

Socially, Aries prefer to have a large group of friends, while the sensitive Pisces tends to enjoy solitude. If Pisces is approached the correct way, they’ll be a lot more open to going out and being around new people.

“Aries will be able to push Pisces out of their comfort zone socially and broaden their perspective, while Pisces in return will be able to soften this fire sign and help keep Aries from becoming impulsive and harsh,” Welch and Daniel say. “Aries directness with Pisces’s intuitive understanding forms a dynamic unstoppable team.”

When it comes to communication in an Aries and Pisces relationship, they’ll have to find a way to make their partnership more balanced. According to Stina Garbis, professional astrologer and psychic, an Aries and Pisces relationship can be one-sided. “Pisces is very giving and intuitive, and will hang on Aries’ every word and help them in many different ways,” she says. Aries will appreciate having someone who “gets” them. However, it’s not in Aries’ nature to immediately think of ways to reciprocate. If Pisces needs to vent their feelings, they’ll have to let Aries know directly that they need someone to talk to.

Aries is also known for being direct and sometimes brutally honest, while Pisces is sensitive. If Aries says something the wrong way, it can affect Pisces deeply and they may shut down. At the same time, Aries may get frustrated over how Pisces takes things personally. The ram will have to learn how to watch their tone around their partner until Pisces gets used to how Aries expresses themselves.

On the plus side, there’s a lot that these two can teach each other. According to Fox, both Aries and Pisces are intelligent and love to learn. “Each has such varied interests that they can teach each other many new outlooks and new ideologies,” she says. Pisces’ imaginative mind will constantly fascinate Aries, and Pisces will love how Aries turns fantasies into reality. They’ll feel comfortable enough with each other to express their dreams, no matter how wild they may seem.

One of the biggest problem areas in this relationship is Aries’ selfishness and Pisces’ selflessness. Pisces are such big romantics that they tend to put their partner’s needs before their own. This has the potential to be an unbalanced partnership where Pisces is the only one giving. Since Aries is the more assertive sign, Pisces can easily lose their sense of self in this relationship if they don’t establish healthy boundaries. On the other hand, Pisces’ people-pleasing nature may eventually bore Aries, who tends to look for challenges.

Are Aries & Pisces A Good Match?

On the surface, Aries and Pisces seem like a couple that could only work in the short-term. At some point, the Aries may be too much for the gentle Pisces. However, they both have a great sense of adventure, emotional depth, and loyalty to those they care about most. As Fox says, “This love story can have a trying start with a satisfying ending to share with the grandkids down the long road ahead.”