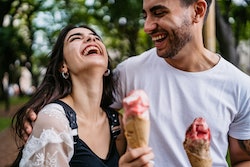 When Aries and Sagittarius get together, it’s going to be a non-stop adventure full of fun, laughter, and good times. They’re two peas in a pod who truly get each other in a way that no one else can. Being fire signs, the ram and the archer live life at a fast pace. They’re social, and their friends love having them around. They’re spontaneous, outgoing, and love trying new things. But once the initial excitement wears off, do these two have what it takes to make a relationship work, or is their flame destined to burn out? Aries and Sagittarius’ compatibility will give you insight into this fiery couple's long-term relationship potential.

“Aries and Sagittarius have a big potential for being a great match,” Leslie Hale, an astrologer with Keen.com, tells Bustle. “As fire signs, they both understand each other and have many things in common. Sagittarius’s Sun falls in Aries’ fifth house of love, and it’s the same for Aries. The fifth house also relates to pleasure, entertainment, and friends, so these two would almost automatically be drawn to each other and have a great time in each other’s company.”

Despite being a fiery match made in zodiac heaven, Aries and Sagittarius may not always see eye to eye. According to Stina Garbis, a professional astrologer and psychic, Aries is very passionate and always fights for what they believe in. Sagittarius, on the other hand, is ruled by Jupiter who’s happy-go-lucky and is just thrilled to go along for the ride until they’re provoked.

“The biggest trouble for this partnership is passion untamed and untended to,” Garbis says. “They both can be careless with their words and actions and may find it easy to separate at the first sign of trouble. This couple could do a lot of damage to each other’s sense of self and can have huge explosive fights that really hurt their pride and relationship. They may rush hastily into a relationship that could easily turn toxic if they’re not careful.” Read on to learn more about Aries and Sagittarius’ compatibility in relationships, dating, friendship, and more.

Sexually, these two are highly compatible. According to Stephanie Gailing, astrologer and author of The Complete Guide to Astrological Self-Care, “They both have an active and dynamic energy which they can bring to their sexual liaisons, and they like things spicy.” Fire signs tend to get bored easily, but that won’t be a problem when these two get together. There’s always something new to try, and these two are always willing. They like being on the move, so public sex is always on the to-do list for this adventurous pair. It’s just important for them to pace themselves, or else they may run the risk of burning out, Gailing says.

On an emotional level, these two zodiac signs complement each other well, too. According to Hale, Aries is brave, passionate, honest, and driven, while Sagittarius is open-minded, values honesty, and is constantly on the lookout for excitement. “These qualities will mix well together, and as a result, this pair typically understands and trusts each other,” she says. “They will feel like they’re home when they’re together.” Sagittarius is one of the biggest freedom-lovers in the zodiac. If anyone is going to convince the archer that being in a relationship is a good idea, it’s going to be Aries.

Intellectually, Aries and Sagittarius are both quick thinkers who get inspired by ideas that come out of nowhere. They can talk about a million different things in one conversation, moving from one topic to the next without either partner getting lost or feeling slighted at the sudden change of topic. However, Gailing says that Aries tend to be more interested in concepts related to the present, while Sagittarius tends to think about the bigger picture.

When it comes to arguments, Aries will argue to get their point across, while Sagittarius tends to brush things off or make things seem unimportant. Aries may get frustrated at how Sagittarius doesn’t seem to care, and Sagittarius may get turned off by Aries’ hotheadedness.

Friendship-wise, these fire signs also make a compatible pair. Aries and Sagittarius have great energy and are both optimistic. These two would have no problem getting along from the moment they meet. According to Garbis, they would have lots to talk about and will bond over their love of adventure. “This could be an amazing pair to travel together to see new sights and foreign lands,” she says. Their friendship could be described as a lot of fun, and these two will definitely get into their fair share of trouble together.

The Biggest Potential Problem Areas In An Aries And Sagittarius Relationship

Although they make a great match, they need to be on the same page about where their relationship is going. According to Hale, Sagittarius is a mutable fire sign, which means they’re subject to changeability. “Sagittarius is known for their love of freedom and desire not to be tied down,” she says. “While Aries is typically in no rush to commit, Sag’s lack of commitment could become an issue, depending on how much commitment Aries desires.” As fire signs, they tend to be selfish. If they put their own needs above the needs of the relationship, it’ll be the source of many of their problems.

Are Aries And Sagittarius A Good Match?

Overall, Aries and Sagittarius have what it takes to make a relationship last. According to Hale, they’ll never get bored of each other and will always come up with something new and exciting to do. “They mix well intellectually, emotionally, and are good in the bedroom,” Hale says. “What more can you ask for?”

More like this
Libra & Aquarius Can Be Great Together, As Long As They Do One Thing
By Kristine Fellizar
Why A Libra & Libra Couple Might Become Codependent
By Kristine Fellizar
Why Harry Styles & Olivia Wilde Make A Great Couple, According To Astrology
By Nina Kahn
Here’s Why Sagittarians Should Pursue A Career In Academia
By Nina Kahn
Get Even More From Bustle — Sign Up For The Newsletter