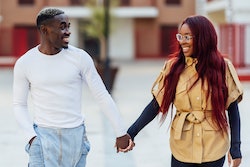 A good rom-com can make you believe that falling in love with your neighbor can totally work, but astrology says otherwise. Case in point, Aries and Taurus. The ram and the bull are neighbors in the zodiac wheel who are far from being each other's perfect love match. Aries and Taurus’ compatibility will give you insight into what to expect in this fire and earth pairing.

According to astrologer Kristina Semos, an Aries and Taurus relationship can be described as stubborn and out of sync. "Generally speaking, these two don't make the most sense together unless there were other influences in their birth charts that meshed really nicely," Semos says.

Aries is a fast-moving fire sign who loves adventure and dives into things without thinking. On the other hand, Taurus is a slow-moving earth sign who thinks everything through and enjoys being in its comfort zone. Once the initial excitement of a new relationship wears off, Aries may find Taurus too boring and predictable, while Taurus will find Aries's impulsivity to be unstable and immature. Read on to learn more about Aries and Taurus’ compatibility in relationships, dating, friendship, and more.

When it comes to sexual compatibility, these two have very different approaches to intimacy and sex. As astrologer Nadiya Shah tells Bustle, the Mars-ruled Aries is energetic, while the Venus-ruled Taurus is sensual. "Taurus is engaged in the moment, where Aries wants to get to the end goal and go for rounds," Shah says. "It might take a moment for these two to adjust to the other’s style, but once they do, the sexual experience can be that much more memorable for them both."

Emotionally, both Aries and Taurus feel things very strongly but express it in different ways. For instance, Taurus is much more controlled than Aries. They're masters at bottling up their feelings. Rams, on the other hand, tend to be more expressive. "They can let loose and express — very spontaneously — what they might be feeling in a given moment," Shah says. "Taurus will be much more reserved, needing time to understand their range of emotion." Although Aries loves the chase, they aren't very patient. If Taurus takes forever to make up their mind about where the relationship is going, Aries will lose interest and move on.

Their can-do attitude and ability to take action towards making their dreams a reality are both things they have in common. According to Shah, Taurus is strategic, while Aries tend to have insecurities over impulsive choices they've made in the past. There's a lot these two can teach each other. "As Aries encourages Taurus to be more courageous, Taurus can help Aries think things through," she says. Aries can also help Taurus to trust their instincts more, which Taurus will take some time getting used to.

Aries and Taurus may move at different speeds, but they can make good friends. According to Stina Garbis, a professional astrologer and psychic, Aries like being with people who listen to them and Taurus is an excellent listener. This is a relationship that works because Aries will feel like they have someone who actually supports them and not someone who wants to compete with them.

“Aries starts things and Taurus can help finish them, adding special details that Aries brushes over,” Garbis says. “They could make a great team or play a good game of good cop, bad cop, with Aries being the bad cop.”

At the same time, however, Aries is a lot more spontaneous than Taurus. The bull enjoys chilling at home, while the ram likes being out and about. While Aries will do their best to drag Taurus out, Taurus is notoriously stubborn. If they don’t want to do something, they’re not going to do it. This could cause some frustrations between the two. Generally, a lot of understanding will be needed to make this friendship work. If there’s an activity they both enjoy doing together, they can form a bond through that.

How Aries and Taurus express themselves may cause some issues in a romantic relationship. According to Inbaal Honigman, celebrity psychic and astrologer, Aries zodiac signs are fiery and energetic. “They don't really worry about the outcomes of their actions or about the victims of their words, they’re committed to telling the truth in all circumstances,” she says.

Taurus, on the other hand, is sensitive and measured. “They are tactful and expect some tact from others as well,” Honigman says. Because of this, Aries and Taurus will have to adjust to each other’s personalities in order to make a relationship last. Otherwise, Aries may find Taurus to be way too sensitive for them, and Taurus may find Aries to be a little too harsh.

The Biggest Potential Problem Area In An Aries And Taurus Relationship

“Aries, ruled by Mars, is very excited and aggressive, pushing things to the next step very quickly,” Garbis says. “Taurus, on the other hand, is slow and plodding, gradually getting to where they need to be stubbornly. Emotionally, these neighbors may move at different speeds and find themselves bumping heads.”

If Taurus feels like they’re being pushed to make a decision before they’re ready, they may decide Aries isn’t the one for them. And if Aries feels like Taurus is taking too long to decide whether or not they want to take things further, they may never get a relationship off the ground.

Are Aries And Taurus A Good Match?

Just based on sun sign compatibility alone, an Aries and Taurus relationship doesn't have the best chance at making things work long-term. However, astrology is more than just sun signs. According to Semos, "If they have other planets in their natal charts that mesh with each other— like moon signs or rising signs in the other's element, for instance — they can find common ground."

Plus, if both partners can adjust to the other's relationship style, it can work out. "They can find a way to learn from the other, so both can feel they can express the best versions of themselves," Shah says. Even if they aren't necessarily a match made in heaven, there's potential for this pairing to last if both partners can learn to be patient and flexible.

This article was originally published on March 3, 2021