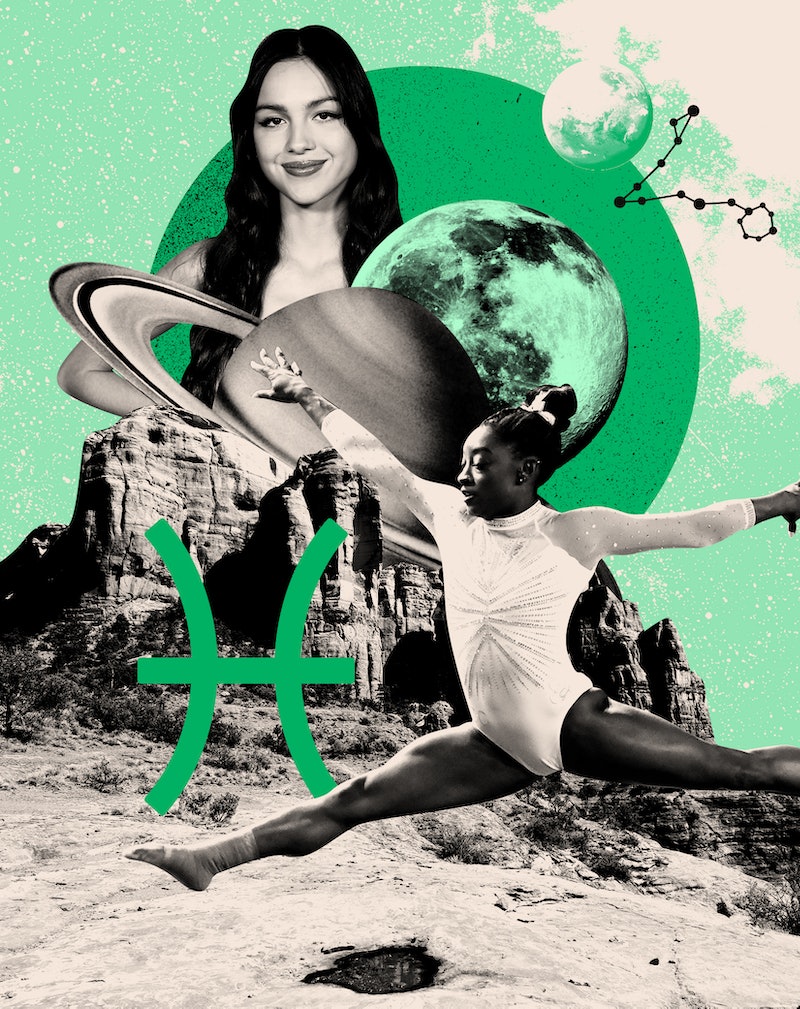 Having the same zodiac sign as someone else doesn’t automatically mean you’ll be two fish of the same school. In fact, some people feel strongly that February Pisces and March Pisces may as well be swimming in two totally different cosmic oceans. Everyone’s birth charts are made up of unique planetary placements that differ based on the day, year, and even minute that we’re born — so naturally, not all Pisces zodiac signs will share a similar personality type. But can astrology actually back up the differences between February Pisces and March Pisces or is that just our imagination?

Before we get into it, there are loads of astrological factors that justify why people with same zodiac sign can be so unalike. Sun signs are a significant part of our cosmic make up, but there’s a lot more to our birth charts than one sign. So while virtually all people born between February 19 and March 20 will be Pisces suns, their moon, Mercury, Venus, Mars, and rising zodiac signs could vary — which means they’ll probably share some core Pisces traits, but might express their feelings, chase their goals, and have relationships in different ways.

But one other major astrological concept to consider are zodiac sign decans. There are three decans within each zodiac sign, and planets express themselves through the sign differently, depending on what decan they fall into. Decans are divided up based on degrees in astrology, and each sign stretches over 30 degrees on the zodiac wheel. That means the first 10 degrees comprise the first decan, the second 10 make up the second decan, and the last 10 are designated to the third decan. Because the sun moves about one degree per day, it just so happens that most February Pisceans are first decan Pisceans, while most born in March will be either second or third decan Pisceans — which could account for some of the differences.

With decans as our main ingredient, let’s dive into the astrological differences between February Pisces and March Pisces that’ll help us understand the zodiac’s mutable water signs even better.

February Pisces Are The Most Stereotypical Pisces

The ruling planet of Pisces is Neptune, aka the planet of dreams and illusions — but most March Pisceans are second or third decan Pisceans, so they have a second co-ruling planet that influences the way their zodiac sign gets expressed. Because February-born Pisceans are ruled purely by Neptune, they tend to embody the most stereotypical Pisces strengths and weaknesses. Pisces energy is usually associated with being empathic, sensitive, and ethereal — and this describes February Pisceans to a T.

Pisces are water signs, so they’re very in touch with their feelings and driven by their emotions — no matter what month they’re born in. But because about half of March Pisceans happen to be co-ruled by the moon (the planet that governs our moods and sentiments), they’re often even more sensitive and vulnerable to people’s temperaments than their fellow cosmic fish. These March Pisceans feel their feelings deeply, so it’s extra important that they stay away from energy vampires and toxic environments.

Pisces zodiac signs are natural creatives who excel at channeling their deep feelings into meaningful works of art — and this is even more so the case for February Pisceans. As the only Pisces decan that’s solely ruled by dreamy planet Neptune, these fish arguably have an even more vivid imagination than their March-born counterparts, and are easily able to translate their complex emotions into symbolic creative endeavors. Many February Pisceans will find themselves drawn to visual art, music, or performance.

Free-flowing Pisceans are known for wearing their hearts on their sleeves, but March Pisceans tend to play their cards a little closer to their chest. That’s because they’re all second and third decan Pisceans, meaning they have either the moon (planet of emotions) or Pluto (planet of transformation) as their cosmic co-ruler. Both of these planets bring a slightly shadowy and more secretive energy to Pisces’ mystique — which makes sense, given that distant Pluto rules all things subterranean and the moon (which only comes out at night) rules our private lives. This influence makes March Pisceans more protective of their privacy.

February Pisces Have A Harder Time With Boundaries

Pisces’ ruling planet Neptune is the great dissolver of the zodiac — it blurs lines and makes everything blend together. And because first decan Pisceans are arguably blessed with the largest dose of Neptune’s ethereal vibes, they tend to have an even harder time with boundaries than March Pisceans. As one of the mutable zodiac signs, Pisceans like to go with the flow and hate to be constrained — so it can sometimes feel unnatural to navigate hard lines and limits. For February Pisceans in particular, this is an art that takes practice and patience.

Pisces are true daydreamers, and they prefer living in a fluffy fantasy world than being bogged down by harsh realities. But because third decan Pisceans (all born in mid March) are co-ruled by power-hungry planet Pluto, they’re often more intense, ambitious, and cutthroat compared to other Pisceans. Pluto’s strong and edgy influence makes these cosmic fish more competitive and assertive than your average passive and pacifistic Pisces — they’re not afraid to go after what they want.

More like this
Here's Your Horoscope For February 2023
By Alexandria Lettman
Here’s Your Astrological Forecast For February
By Nina Kahn
These 4 Zodiac Signs Make The Best Bridesmaids
By Nina Kahn
The Zodiac Sign Pairs Most Likely To Have A Sibling Rivalry
By Kristine Fellizar
Get Even More From Bustle — Sign Up For The Newsletter
From hair trends to relationship advice, our daily newsletter has everything you need to sound like a person who’s on TikTok, even if you aren’t.