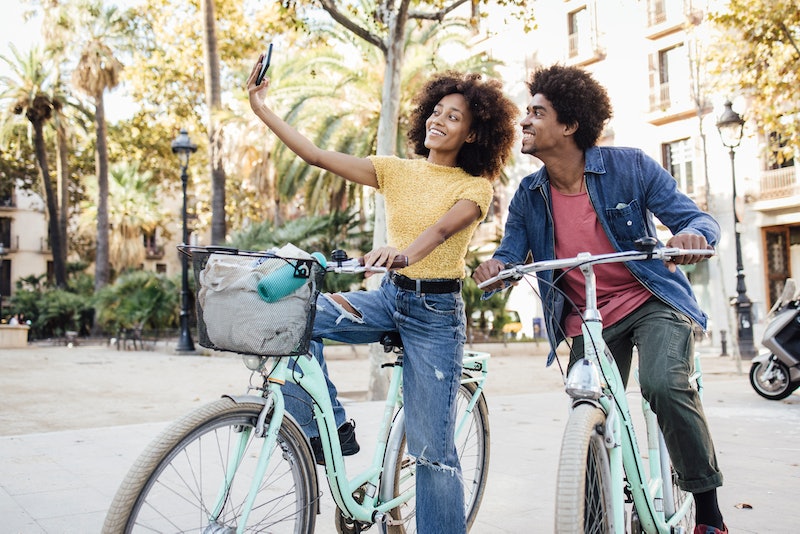 Capricorn, the zodiac’s ambitious sea goat, has a reputation for being a workaholic. They tend to put their career over anything else, including their partner. If they’re in the middle of a big project, there’s a chance you may not hear from them until it’s done. While making money and achieving their goals are important, they do want to have a relationship that lasts. When two Capricorns are in a relationship together, there are going to be some challenges. But according to astrologers, this is a pair that can work. Capricorn and Capricorn’s zodiac compatibility has everything you need to know about this sea goat duo.

A Capricorn-Capricorn relationship is one that’s trademarked by honesty and seriousness. “Both of them prioritize their careers and they know how to be supportive of the other's goals,” astrologer Virginia Castiglione tells Bustle. “They form a solid partnership built on transparency and shared projects. They’re practical and would probably be impressed by each other's work ethic and commitment to their professional lives.”

Two Capricorns may find each other through work or a hobby they both enjoy. If they’re in the same industry, there’s a good chance they may know of each other before they ever meet. “They would likely recognize each other by their work ethic, well-defined personality and natural authority,” astrologer Jill Loftis of Nuit Astrology, tells Bustle. “As long as admiration — not envy — is the spark, this could be a true power couple.”

Since Capricorns tend to keep their schedules packed, they don’t have a ton of time to play games. If they’re interested in someone, they’ll let them know. As two earth signs, they’ll take their time to get to know each other before making a commitment. They’ll also hold off on making anything official until everything in their life is in a good place. Fortunately, these two understand that about each other and aren’t likely to push for a relationship before either partner is ready.

Two Capricorns would feel very comfortable with each other in bed. They tend to view sex as a way to release tension, and not as a way to connect as a couple. So they can have their fun and then go about their usual business five minutes later without offending each other. After all, Capricorn isn’t exactly known for being romantic.

In bed, they’ll find things they both enjoy and will largely stick to that. As Stina Garbis, professional astrologer and psychic, tells Bustle, “Capricorn isn’t usually very kinky, so I don’t think they would embarrass or shock each other in bed with crazy stunts that would normally be a turn off. Lots of energy, vigor, and passion with this couple.”

Capricorn is ruled by Saturn, which is the planet of hard work, responsibility, limitations and restrictions. Because of this, sea goats take relationships very seriously and they tend to be more reserved when it comes to sharing their feelings. You won’t get any big emotional outbursts here, and you won’t find any mushy, over-the-top confessions of love, either. According to Garbis, Capricorns are very loving, but demonstrate that through acts of service and fulfilling each other’s needs.

In order for Capricorn to feel emotionally safe in a relationship, respect and healthy boundaries are essential. According to Loftis, Capricorns need the space to pursue their aspirations and ideals. “They might have concerns about the other being unable to slip into the role of supporter and cheerleader,” she says. “If they can walk this line for each other of being supportive but neither of them feeling subservient, they could spur each other to accomplish audacious aspirations with real-world results.”

The Biggest Potential Problem Areas In A Capricorn-Capricorn Relationship

Power and control can be issues this pairing struggle with. According to Loftis, Capricorns are comfortable being in control and there’s a tendency to treat the relationship like a chess match. This is something that can both intrigue and frustrate them. If they they get too competitive, they may stop seeing each other as teammates which can be harmful to the relationship long-term.

Fights between two Capricorns can also get pretty nasty as sea goats like to win. “If this couple has serious disputes it might be over who is right and who is wrong, and they may have to agree to disagree,” Garbis says. “Not many people would want to be in a room with a quarreling Capricorn couple, because it could get emotionally and verbally brutal.” Both partners will need to learn how to put aside their ego for the sake of the relationship if they want it to work.

At the end of the day, it’s essential for Capricorns to make some time for their relationship. Capricorns are very ambitious and will do what they can to support their partner. But it’s equally important to spend quality time with each other without thinking about work. “When they’re together privately, they need to put down the metaphorical ‘sword and shield’ that they use every day in the business world and have trust, honest conversation, and physical connection,” Loftis says.

Despite the challenges that come with being with someone of the same sign, two Capricorns in a relationship have what it takes to last a lifetime. They’re both ambitious and will support each other to achieve their dreams. They’re also very loyal and commitment-oriented. Once they find each other and establish trust, there’s no going back.