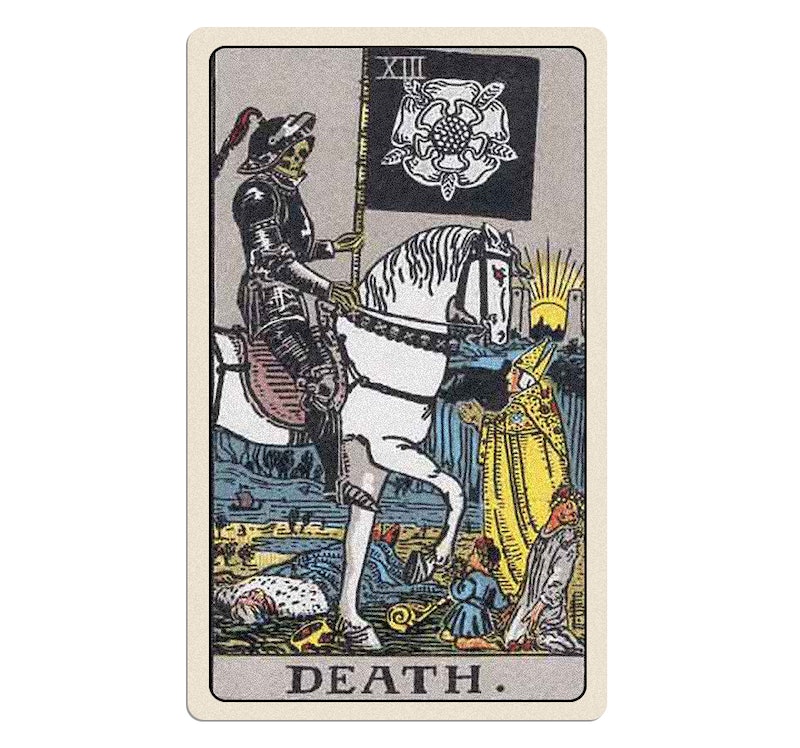 There are several cards in the tarot that tend to make people nervous, and one of them is the Death card. After all, the word “death” doesn’t exactly evoke positive vibes or feelings the way the Sun card does. It also doesn’t help that the imagery in the traditional Rider-Waite tarot deck is of the grim reaper. But according to Clarisse Monahan, astrologer and tarot card reader, the Death card isn’t meant to be feared. Instead, there’s actually a message of hope within the Death tarot card.

In the tarot, there are 22 cards that make up the major arcana. The Death card is the 14th card in the deck and comes right after the Hanged Man. “This is fitting as the Hanged Man is a card of inertia and of being stuck,” Monahan says. “The Death card gets things moving again — it is the card of change, which can sometimes be welcome, sometimes not.”

The Death card can represent significant change, which can be intense and chaotic. However, there are no “bad” cards in tarot. “I am a firm believer that every card you get is exactly what you need to see at that moment,” Monahan says. “The tarot doesn't intend us to consider the Death card literally, but presents it rather symbolically in the context of transformation in our lives on this planet.” Some might even pull this card and use it as a “springboard” for exploring feelings around death and change.

How you use tarot in your daily life and interpret each card is all very personal, and there’s no one way to go about it. If you want more insight insight the Death card and how you can apply it to a situation you’re going through, here’s what you need to know.

What Does The Death Tarot Card Mean?

“Scorpio energy is not about half measures — it is all or nothing, and this rings very true in the Death card also,” Monahan says. “When you get this card, it doesn't necessarily mean you want to end something but it may be calling you to question whether you’re truly invested in whatever it is you’re asking about. However, if you pull this for the energy of two people together, this can be a very positive and passionate card as Scorpio being a fixed water sign indicates a loyal and deep bond that can traverse stormy weather.”

If you study the classic image of the Death card in the Rider-Waite closely, there is an element of hope that many tend to miss. According to Monahan, if you look passed the image of the grim reaper, you’ll find a sunrise in the background.

“The sunrise here reminds us that even in the darkest moments and times, there is always a new day dawning with the potential of fresh starts and new beginnings,” she says. “This card reminds us of our natural cycles of life.”

What Does The Death Card Mean When It’s Upright?

When you pull the Death card upright, it can represent the need to embrace change, the ending of a chapter, moving on to a deeper phase in a relationship, transformation, letting go, and release.

“This is the card of inner transformation that will end old patterns,” Monahan says. “Sometimes we need to cut cords and ties to make space for something deeper.”

What Does The Death Card Reversed Mean?

When the Death card is pulled in reverse during a tarot reading, this can indicate resistance to change, being stuck in a rut, or having a fear of change in general. You may be getting advice that it’s finally time to let something go.

“Usually the harder we cling to the old, the harder the process will be,” Monahan says. “Like the Phoenix who flies out of the ashes, the energy from a breakup, a loss, or a separation will generate changes and transformations.”