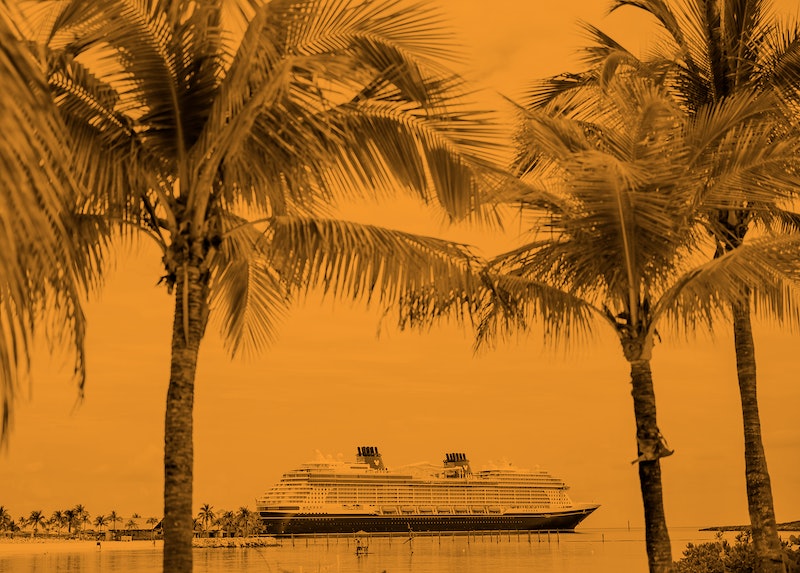 If you’re thinking about booking an adults-only trip with Disney Cruise Line, you’re likely already a fan of The Mouse, so I won’t waste any time preaching to the choir. Indulging your inner-child is one of the great joys in life, and it’s a well-known fact that Disney is one of the best places to do so. So how does the company’s newest cruise ship, the Disney Wish, shape up?

My partner and I attended the Christening Cruise, a launch party of sorts for the new ship, and got to experience a taste of what’s in store for guests of the boat’s July 14 maiden voyage and inaugural Caribbean season. As a cruise newbie, I was tentative and naturally concerned that the traditional magic of a Disney vacation wouldn’t translate to the company’s new 144,000 gross ton vessel. With 1,254 rooms, 70% of which have their own private verandah, this ship is the biggest yet. Luckily, its atmosphere and enchantment match its size.

Aside from your standard character interactions and multifarious Mickey-shaped foodstuffs, there’s a whole (new) world of adult-only experiences created for guests aged 18+ aboard the Wish, and none of them compromise the warm fuzzies you get in the parks. The ship wasn’t created exclusively for adults — let’s face it, the kiddos were never going to be neglected when Mickey’s concerned — but Disney focused special attention on adults with the sheer variety of dining and entertainment options.

Think of the Disney Wish as a floating all-inclusive resort. Meals, some snacks, soft drinks, and hot beverages are all included in the upfront cost, as are the majority of activities and entertainment options (more on those below). The cost of spa and beauty treatments, alcoholic drinks, and “signature” restaurants — meaning the fancier, adult-only spots that require reservations outside of your dining rotation — are not included and should be factored into your onboard budget.

And, like an all-inclusive resort, you’ll barely need to leave the ship during your stay. Whether you’re traveling as a group of friends, a couple, or by yourself, this ship has got you and your itinerary covered. Below, find our top picks:

If You’re Traveling As A Group

Traveling as a group of adults can be challenging, especially when parties have different vacation goals. Luckily this ship has most bases covered, from high-end dining to themed drinks that will make even the most hardened skeptics smile.

Disney Cruise Line’s signature restaurant isn’t new; it launched back in 1998 on the Magic and has since been rolled out across the Wonder, Dream, Fantasy, and Wish cruise ships. Despite its age, Palo is one of the best adults-only spots on board. Servers take your preferences into account before recommending a three-course meal and drinks, but there’s no pressure to choose their suggestions. For us, the starters on Palo’s menu lent themselves to sharing: My partner and I tried three starters before our separate entrées and a shared dessert. Our server, Silvio, hit the nail on the head with the Portabella, Morel, Crimini and Porcini Risotto and Piquant Dover Sole. As a pescatarian, I was accommodated for despite the “steak house” name, and could have eaten an entirely vegetarian meal without compromising taste. You’ll have no issues catering to multiple dietary requirements here.

Palo is a perfect spot for your groups’ final-night dinner on the ship, thanks to its quiet-but-not-too-quiet dining room, large tables (we sat at a table for four despite being only two), and adjacency to The Rose lounge. Post-dinner cocktails, anyone?

Put your feet up at Serenity Bay

An adult-only beach on Disney’s private island? Say less! Serenity Bay is tucked away at the far side of Castaway Cay, a 1,000-acre Bahamian island owned by Disney and exclusive to Disney Cruise Line guests. A short ride on the island’s speedy shuttle service will take you to the 18+ beach where you’ll find hammocks, sun loungers, and ample parasols for people who prefer shade. (Cast members noted that we could make the 25-minute walk, but would likely burn due to lack of shade.) The water is shallow enough to sit in, meaning you can grab a beverage at the nearby bar, Castaway Air, and enjoy it while staying cool. Many groups even took the smaller lounge chairs into the ocean and set up camp there.

If you get bored of relaxing, Disney also hosts a selection of excursions. Your group can swim with stingrays for $56 per person or rent an aqua trike for $26 per 30 minutes. EverythingMouse.com has an extensive list of what’s currently available on the island, the majority of which are perfect for groups larger than two.

Just off the ship’s main thoroughfare on Deck 3 is the Star Wars Hyperspace Lounge. Behind a slightly hidden sliding door, which opens at the push of a button (literally), you’ll find an immersive bar experience complete with a window-sized LED screen that simulates jumping to hyperspace at regular intervals. Between sips, guests can watch their “yacht-class spaceship” galaxy-hop to far-far-away planets like Batuu and Tatooine.

Most drinks on the menu come with a fun, interactive element, which servers roll out when the drink arrives at your table. The whisky-based Freetown Reserve from Tatooine, for example, is presented with a vapor-filled bubble, which gives off a smokey aroma when popped. For coconut fans, there’s also Berken’s Flow from Mustafar, which features a hidden message that can only be read under UV light. The $5,000 Kaiburr Crystal Cocktail has generated the most conversation online, though. As reported by Elite Daily, the cocktail is more of a “Star Wars experience” and includes goodies like souvenirs and a voucher for a solo trip to Skywalker Ranch (the “pastoral home” of Skywalker Sound).

If You’re Traveling As A Couple

Being stranded at sea surrounded by children and giant versions of animated movie stars could sound unromantic, but the Disney Wish makes it easy to sneak away and enjoy alone time with your significant other — babysitting vibes minimal.

Get pampered at Senses Spa

The entire Disney cruise fleet is equipped with a Senses spa, as are many of their inland resorts. On the Wish, guests can book treatments like facials and acupuncture, or purchase a pass for The Rainforest, which features a state of the art frigidarium.

We opted for the 50-minute couples massage, which was perfect for a pair of strung-out social media managers desperate to be forcefully separated from their phones for more than 5 minutes. After our treatment, we made use of the spa’s steam room and showers, which are stocked with the luxury British skin care brand Elemis, before mooching around in the waffle robes until we felt sprightly enough to venture out on deck.

Catch some live music at Nightingale’s

On our final night of the cruise, the piano bar, Nightingale’s, was packed to the rafters. Sophisticated decor, mood lighting, and low tables made the room feel intimate and romantic from the get-go. Conversation was accompanied by live jazz versions of Disney classics like ‘Under The Sea’, as well as newer favorites from Tangled, The Princess & The Frog, and more. When it came to drinks, the on-theme cocktails were the cherry on top: The “Sweet Nightingale” came poured in a delicate glass nightingale. Elsewhere, the menu was heavy on gin and botanical flavors, leaning into Cinderella’s rural roots.

Watch a Broadway-style show at The Walt Disney Theater

Musical theater fans are in for a treat on board the Disney Wish. The Walt Disney Theater hosts three Broadway-style performances, the flagship of which is a brand-new adaptation of the 1989 classic The Little Mermaid. We got a sneak peak of the show’s incredible costuming, choreography, and performances. There’s also Disney’s Aladdin and Disney Seas the Adventure, the latter of which is aimed at younger audiences but is still an enjoyable way to start the trip, especially since it features ’90s hits like “Go The Distance.” Couples that enjoy date nights with a show won’t be disappointed. Performers and creatives hail from the most iconic theatre districts around the world.

Cruises are the perfect place to kick back and people watch. But if you’re feeling more interactive, there are also ample opportunities to meet fellow Disney Adults — hit up the pub, Keg & Compass, or karaoke and trivia nights at Luna.

Disney Imagineers have succeeded in giving adults a quiet respite amid the show tunes and oversized characters. In the adult-only Quiet Cove, you’ll find the (lightly) Moana-themed Cove Cafe, serving a selection of hot beverages, wines, and snacks. As for coffee, Cove Cafe offers your standard French Press and Espresso, in addition to V-60, Chemex, Aeropress, and Moka coffees. You can choose from five different beans, or try one of the international specialities hailing from locales like Vietnam, Austria, and Thailand.

If you’re looking for a slightly boozy approach to caffeination, they even serve cold-brew cocktails. And the best part? It’s all within a stone’s throw of the Quiet Cove’s infinity pool, making this the perfect spot to start your day with a book or grab an afternoon energy boost post-swim.

Consider carving out a spot in your schedule for a special movie theatre experience. Aboard the Wish, you’ll find the Wonderland & Neverland Cinemas, which come complete with plush seats, hidden details (peep the Cheshire Cat and Peter Pan nods), and Disney popcorn galore (this isn’t regular popcorn, folks). Guests can even watch some of Disney’s newest movies: During our trip, for example, Lightyear and Doctor. Strange in the Multiverse of Madness played multiple times a day. Solo trips to the movies are fantastic in the real world but even better on a Disney Cruise — as an added benefit, it’s a welcome A/C-filled break from the crowds.

Get a fresh ’do at Untangled Salon & Hook’s Barbery

Traveling alone means luxuriating in me-time 24/7, in whatever form takes your fancy. The treatment menu at Untangled Salon features manis, pedis, and teeth whitening (!), and the Hook’s Barbery has a list of shaves and treatments for shorter hair — all perfect ways to pass a few hours if you’re aboard the Wish alone. Both salons are themed to their namesakes (Tangled’s Rapunzel and Peter Pan’s Captain Hook), and include touches that only a Disney adult will appreciate; keep your eyes peeled for Rapunzel’s artwork and Hook’s hidden bar.

More like this
Expert-Approved Hacks For Packing A Carry On
By Jessica Goodman
Where Was 'The Bachelorette' Season 19 Filmed? More European Destinations Are On The Way
By Radhika Menon
The 5 Best Backyard Water Slides For Adults
By Megan Gray
Lewis Hamilton Turned Down A Role In 'Top Gun: Maverick' For This Surprising Reason
By Darshita Goyal
Get Even More From Bustle — Sign Up For The Newsletter