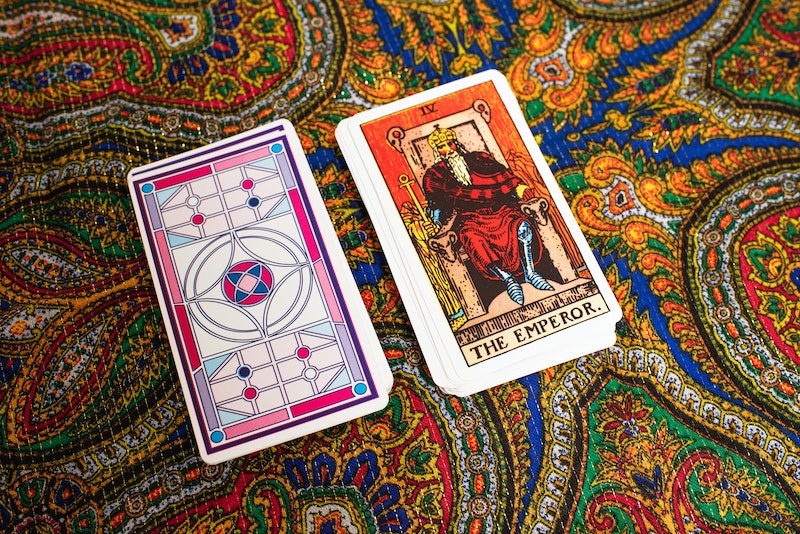 The Emperor tarot card is an interesting one to pull in a reading because the meaning behind the card isn’t obvious at first glance. Unlike the Devil or the Lovers, there isn’t a lot to infer from the imagery of an older man sitting on his throne. While the Emperor can (and oftentimes does) represent an emperor-like figure affecting your life, the card holds several different meanings. Below, tarot readers share the meaning behind the card and how you can apply it to your questions.

In tarot, the Emperor card is number four in the major arcana. It comes right after the Empress, and right before the Hierophant. In the standard Rider-Waite deck, the card features imagery of an older man sitting on his throne. “He is seen as a strong ruler and holds all the power, as well as the wisdom to rule his domain,” tarot reader Michelle Lewis tells Bustle. “His card is marked by the number four, which is symbolic of stability and balance.”

The Emperor card’s significance in the Fool’s journey, which can be seen if you look through the major arcana in order, is that it brings a powerful lesson of self-control and mastering your power. According to Lewis, the Emperor teaches the Fool responsibility, leadership, and how to use their power wisely and for the benefit of those who depend on them.

What Does The Emperor Tarot Card Mean?

The Emperor is the “father archetype” and symbolizes the influence they tend to provide. As spiritual counselor and tarot reader Davida Rappaport tells Bustle, it can allude to a male figure in your life, like a father figure, your partner, or your boss. Of course, it doesn’t necessarily have to be a male figure, and the Emperor could even represent you as someone who’s taking on more responsibilities. According to Rappaport, the key words to keep in mind here are strength, leadership, rules, order, and structure.

What Does The Emperor Card Mean When It’s Upright?

For one, it can be a stand-in for a person involved in the situation you’re looking for clarity on, whether that’s you, your partner, your parent, or someone who likes structure, rules, and order. “Depending on who you ask, the Emperor can be a visionary or a tyrant,” Melinda Lee Holm, tarot reader and author, tells Bustle. “I think it carries the potential for both.”

If you’re doing a career reading and the Emperor in the situation is you, it’s a message to look at your leadership style. Are you letting other people call the shots? If so, it’s time to step up and start leading the way. If you’re someone who’s already doing so, think about how effective your style actually is. Are you getting the results you want but leaving a trail of resentment behind? “Leadership is flexible,” Holm says. “Adapt your style to your situation.”

When you’re pulling cards about love and the Emperor comes up, you may be in a situation where you need to set better boundaries for yourself. According to Rappaport, the Emperor is encouraging you to take a “stronger role in defining your relationship” so you can take a confident step forward.

What Does The Emperor Card Reversed Mean?

Like most tarot cards, the Emperor reversed can be interpreted differently than if pulled upright. For one, it can remind you to step up and find your power. According to Rappaport, this may be a card that comes up if you feel like giving up or giving in. You may consider taking on a more leadership position or try looking for a mentor that can help bring you out of the funk you’re currently in.

In a love reading, the Emperor reversed may signify someone who isn’t ready for a more solid commitment. According to Lewis, they may be immature, indecisive, or lack self-control. It could also indicate someone who is very controlling and isn’t the best fit for a healthy relationship.

If you pull the Emperor in reverse for a career reading, it can represent someone who needs more training and confidence before they can take it to the next level. As Lewis says, “Promotions are available and waiting for you, now it's up to you to get yourself ready to step up and claim them!”

More like this
Angel Number 1221's Spiritual Meaning, Explained
By Kristine Fellizar
The 3 Most Gullible Zodiac Signs, According To Astrologers
By Kristine Fellizar
Angel Number 808 Is A Symbol Of Your Potential
By Nina Kahn
November 2022's New Moon Is A Prime Time For Manifestation
By Nina Kahn
Get Even More From Bustle — Sign Up For The Newsletter