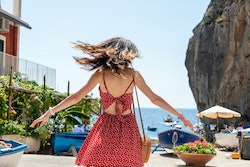 Just when you might have thought that the biggest TikTok trends of 2021 had already arrived, the “Helicopter, Helicopter” sound has taken flight and taken over your For You page. Whether you’ve already been mesmerized by hypnotic spinning TikTokers on your feed, or are absolutely bewildered as to why your Gen Z cousins have been shouting out, “Helicopter, helicopter!” at your holiday dinner table, there’s a lot you might not know about the “Helicopter, Helicopter” TikTok trend.

For starters, many might be bewildered by the sound’s seemingly random content. In the most popular version of the sound on TikTok titled “Helikopter by Fazlija,” which now has over 2 million TikToks associated with it, the sound features a man’s voice singing, “Helicopter, helicopter,” before the chop of propellers play over a beat drop.

If you’re looking to learn more about the mysterious emergence of the sound, or want to get your own viral “Helicopter, Helicopter” TikTok spinning, here’s everything you need to know about the new trend.

Where Did The “Helicopter, Helicopter” Sound Come From?

Though the sound appears to have taken off around November 2021, the clip is from a song released in 2016 by Romanian-Bosnian singer Fazlija. This isn’t the first time that TikTok has revived songs from years ago and catapulted them into newfound fame; songs like SALES’ “Pope Is a Rockstar,” released in 2016, have gained new traction from TikTok this year.

Fazlija’s “Helikopter” now has over 2 million plays on Spotify, and the artist recently released a music video for the track in response to its new popularity.

Since the sound emerged on TikTok, there have been a few different helicopter trends. The first to gain popularity appears to have been a facial expression challenge over an altered version of the song.

“The first time I came across the Helicopter sound on TikTok, it was an altered version of the song where the word ‘Helicopter’ was played at normal speed, a second time slowed down, and a third time extremely slowed down,” says TikTok creator Jera Bean aka Jera Foster-Fell, whose username is @jera.bean. “The person who created the video would mouth the words and essentially play a different character through their facial expressions each time they said ‘helicopter.’”

For TikTok creator Dmitry Pepper, known as @mistermainer on TikTok, his first encounter with the sound was a video where a cat appears to be dancing to the song with his paws held up in the air. Pepper created a version with his dog, Biscuit, wearing a propeller hat; the video would earn him nearly 9 million views.

Pepper says he has received over a million new followers in the past few weeks since making four videos using the viral sound, and that his “Helicopter, Helicopter” videos are now some of his most popular ever. “Whenever I post a TikTok or Instagram Reel, everyone comments ‘helikopter, helikopter,’” says Pepper.

After a few iterations of “Helicopter, Helicopter” memes, one version emerged to become most popular of all. It’s unclear who was the original creator of the trend, but Jera Bean says that she first saw user @michelle_bassett_ share a time-lapse shuffling around and spinning in circles with extended arms. When sped up, the video appears to make the person look like they are spinning at very high speeds, like the propellers of a helicopter.

Since gaining popularity, countless versions have emerged – including synchronized swimmer-esque choreography, attempts in 8-inch heels, and hilarious lines of college students shuffling around their dorm halls.

How Do You Create A Helicopter, Helicopter TikTok?

Since gaining popularity, many TikTokers have been seeking tutorials on how to make their own spinning helicopter video.

In Jera Bean’s own tutorial, she demonstrates that users must shoot the video on an iPhone camera in the time-lapse setting. Then, a user will record themselves shuffling in small steps around a room, and eventually extending their arms before shuffling in a circle. Jera Bean recommends speeding up the spinning over time for “dramatic effect.” Once you upload your video to TikTok, you can sync the clip with the audio.

Add the “Helikopter” sound and get ready for your TikTok to take off into virality. The sky’s the limit.

More like this
Ashamed Of Your Screen Time Stats? Here's How To Change That
By Alexis Morillo
Learning To Love, Not Judge, The Lunchbox Wives Of TikTok
By Esther Zuckerman
11 Super Bowl Instagram Captions To Use On Game Day — Even If You Don’t Like Sports
By Alexis Morillo
Here’s What TikTok's "Mascara” Trend Is *Really* About
By El Hunt
Get Even More From Bustle — Sign Up For The Newsletter
From hair trends to relationship advice, our daily newsletter has everything you need to sound like a person who’s on TikTok, even if you aren’t.