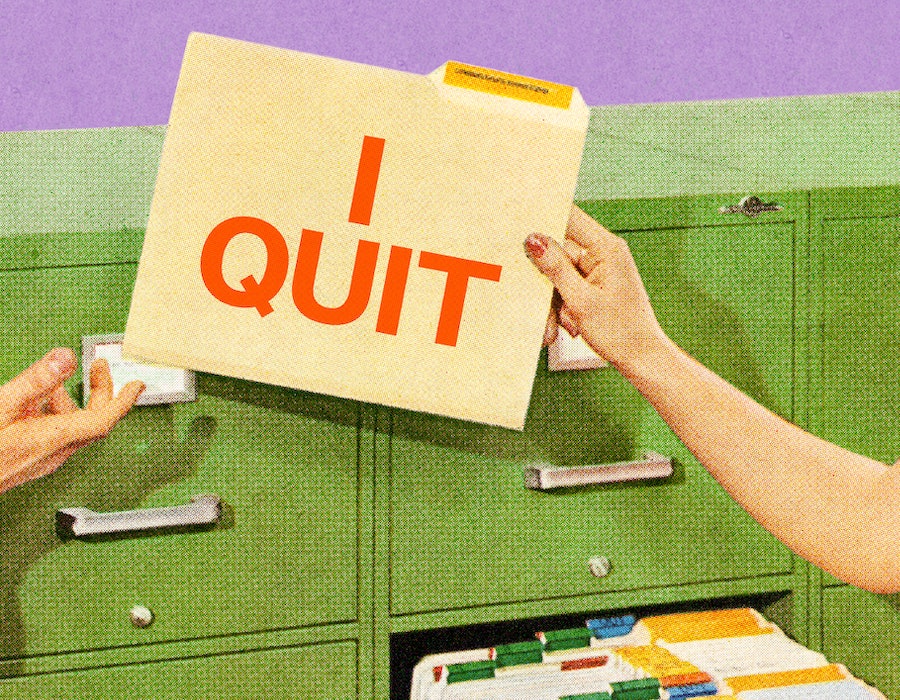 The Great Resignation is upon us. Four million people left their jobs in April 2021, per CNBC, followed by 3.6 million in May, 3.9 million in June, and 3.98 million in July. Just to hit home how bonkers that is, those numbers are the highest they’ve ever been since the Labor Department started tracking them in 2000. And so we find ourselves in yet another unique time in human history. (How exhausting.) Peer pressure might have you wondering: Should you follow the crowd, flip a desk, and tell your boss to f*ck off? The venerable Mahatma Gandhi once said: “It’s easy to stand with the crowd; it takes courage to stand alone.” To which I say, “Whatever, Gandhi! It’s quitting time!”

Are you upset that your office made you office again? Did lockdown make you realize that life is too short to spend it “revolutionizing data”? Or did you simply realize that your office crush doesn’t look nearly as good without a Zoom filter, and it ruined the whole deal for you? Here’s how to decide if quitting your job is right for you, and join the Great Resignation as painlessly as possible.

Step 1: Take A Hard Look At Your Life

It’s important to investigate how you really feel about your work life. Do you live to work, work to live, or think that’s the dumbest question imaginable? How many hours of the day do you spend counting the hours of the day? When was the last time you felt an emotion that could be detected by others?

If acronyms like KPI, CPU, and ROI excite you more than ones like YOLO, FOMO, and GTFO, then you might want to stay put. Otherwise, proceed to Step 2.

Many of us have lost sight of what we want in a career over the years. In fact, it’s been scientifically proven that every time you fake-laugh at your boss’s jokes, a goal you once had becomes impossible to recall.

To get reacquainted with your dreams, consider vision boarding. For those unfamiliar, the practice, also called mood boarding, involves leafing through magazines for pictures that inspire you. Then, you glue those cut-outs onto poster board, not wholly unlike a murder note. You can find the glue sticks next to the Lisa Frank Trapper Keepers at CVS. This process is definitely a very adult, goal-oriented thing to do, and not at all a giant waste of time. If you find yourself gravitating toward pictures of burning buildings, open roads, and Etsy stores, then it might be time to quit.

You’ve determined that your current role doesn’t fit into your long-term goal of not revolutionizing data. But beware of leaving just to leave. You might hate your job, but you don’t want to end up at an exciting, new, fully remote startup that, two months after you’re hired, decides to bring everyone back to the office and expects you to move to Boise, Idaho.

It’s also probably not a great idea to quit and hope that your direction in life will “appear” because it probably won’t until long after your benefits disappear. Before joining the Great Resignation, think about what you want out of the new gig. If you simply want a bigger paycheck, apply away, and quit when you’re hired. Or use the new offer to negotiate a raise at your current workplace. (Look at me, a professional comedian, giving actual career advice!)

Step 4: Tell Everyone You Know That You’re Quitting

This accomplishes two things: One, it embarrasses you at every single brunch from now until quitting time when you have to tell Tiffany and Rachel that you’re “still working” on “updating"“ your resume. In other words, accountability. Second, those same people can help find you a job because you’ll need one after your boss finds your declarative social media post that you’re quitting before the end of the year.

Step 5: Settle On Your Next Career Move

Now you have to apply for jobs without settling for one that’s a step down rather than a step up. This requires patience, tenacity, and screaming into the void — all skills you conveniently perfected during the last 18 months.

This step also will force you to make a very important decision. Are you interested in continuing to work for someone else or for yourself? Is now a good time to finally go out on your own and see if there’s a market for your app, your design work, or for an Etsy store stocked with horse-pun-themed throw pillows? In weighing (neighing?) these options, important things to consider are your personal hustle threshold as well as your threshold for hearing others say the word “hustle” and if you prefer something stable or not. (See what I did there? Look closely. It was also a horse pun.)

Step 6: Send In Your Letter Of Resignation

Once you’ve got that offer letter in hand or that Etsy username secured, it’s time to schedule your exit interview. These days, it’s hard to go out in a blaze of glory when your last hurrah will likely consist of you saying farewell in an awkward Zoom call in which your boss dominates the entire conversation, no one mentions you at all, and then you toss your laptop out the window like an expensive Frisbee.

To make sure you’re gone but not forgotten, plan some harmless (ish) pranks. There’s nothing better than ex-coworkers finding petty notes in the breakroom three years after you’ve hid them. (“Hey Matt! If you’re finding this note, it means you’re still at this stupid job! Haha, loser.”) Another idea is to neglect to share any of your passwords, particularly for important tools or documents, and then be completely unavailable whenever someone tries to contact you after your last day. (Blame it on the Facebook outage!)

As Gandhi once said, “Hate the sin, love the sinner,” and I’m pretty sure office high jinks is what he was talking about. Good luck!