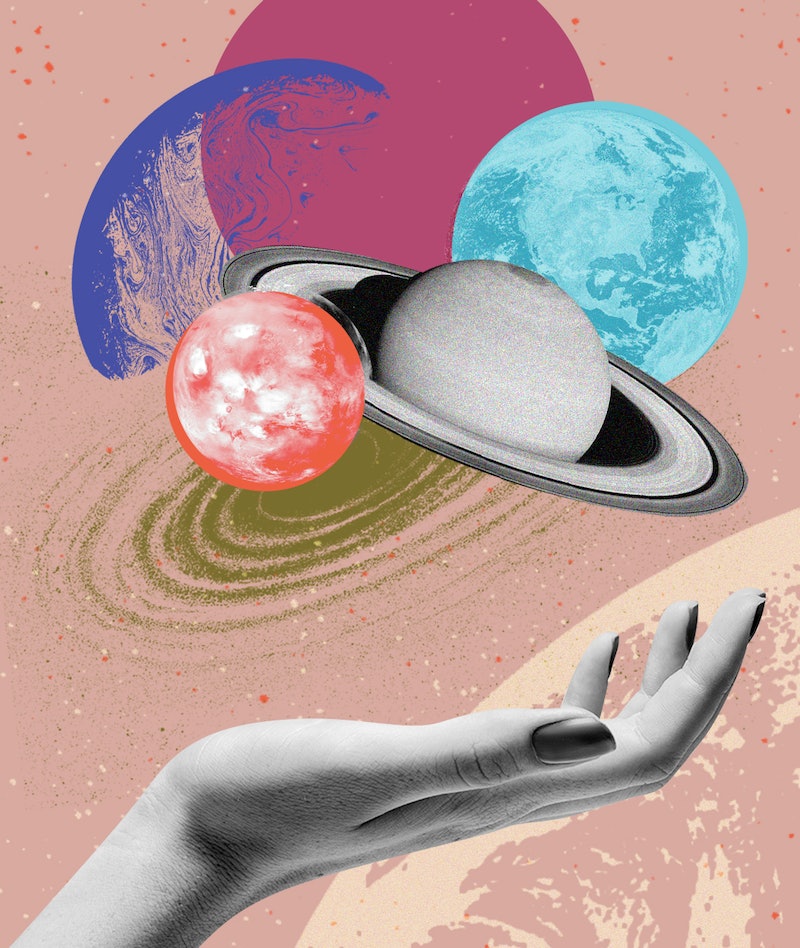 On Jan. 20, President-elect Joe Biden will take the oath of office and become the 46th president of the United States. But tensions are high leading up to Inauguration Day 2021 in light of the insurrection at the U.S. Capitol on Jan. 6. This inauguration is slated to have the largest security presence in U.S. history — 25,000 National Guard members were authorized to provide day-of support, and the FBI will vet each individual due to concerns of internal threats.

But the astrology of Inauguration Day 2021 bespeaks some serious security concerns, too — so as an astrologer, I'm relieved the inaugural planning team is closing the gap on any risks. The moon is bringing emotions to a boil, Mercury retroshade winter 2021 is entrenching us in confusion, and a rare alignment between hotheaded Mars and shock-artist Uranus is upping the potential for recklessness. Playing it safe, keeping our cool, and avoiding any risky behavior today is key. Here's what the planets have in store for us on Inauguration Day 2021.

The Moon Is At An Energetic Tipping Point

At the time of the inauguration ceremony, which starts a right before noon EST, the moon will be in the combative fire sign of Aries, at the critical 29th degree, known as the anaretic degree in astrology. There are only 30 degrees in each zodiac sign (0–29), so when a planet reaches the final degree, it carries the energy of the sign to a cumulative breaking point — and can bring about a restless, anxious, and even explosive energy that's bursting with the anticipation of change.

It's interesting to note that during the Capitol insurrection on Jan. 6, Mars (planet of war) was located at the exact same point in the zodiac — so we could expect to feel echoes of that uncontrolled energy during the inauguration, too. Our feelings are hot to the touch right now, so we should beware of playing with fire.

The moon will be void-of-course during the inauguration ceremony, up until it enters Taurus at 2 p.m. EST, meaning that it'll be done making connections with any other planets before moving into the next zodiac sign's territory. A void moon is an inauspicious time to begin anything new, as work we do now may feel like a waste of energy — and it'll likely make all of us feel more edgy and ungrounded. Some astrologers liken the energy of the void moon to that of a planetary retrograde, given the way it puts a haze over our thinking.

Speaking of retrogrades, we'll be in the midst of 2021's first Mercury retrograde's pre-shadow period during Inauguration Day, too — which can bring a general sense of confusion and logistical chaos to an already-stressful event. Don't be surprised if there are last-minute glitches, miscommunications, or changes of plans as far as time and location go.

Mars/Uranus Conjunction: Safety Precautions Are A Must

There's one planetary aspect in particular that has astrologers most heavily concerned about safety and security come Jan. 20, and that's the hostile Mars/Uranus conjunction, which takes place in the bullish sign of Taurus. Mars is the planet of war and aggression, while Uranus is the planet of unpredictability and unexpected events — so when these two cosmic forces combine, as they will to a precise degree on Inauguration Day, it's time to sound the alarms for potential danger. This energy brings a high chance for recklessness, riots, accidents, and even violence, so we should all be extra careful and conscious of personal safety.

This volatile conjunction is further amplified by the presence of expansive planet Jupiter, which is in a tense square aspect with both Mars and Uranus on Inauguration Day. Jupiter has the power to exaggerate everything it touches, meaning that it could make people feel extra impulsive, zealous, and over-confident about their abilities today — which could in turn lead them into taking dangerous risks and clashing with others. It's not a good day to pick fights or be combative, so find healthy ways to channel frustration or air out your feelings.

Just before 2 p.m. EST on Wednesday, the moon will enter grounded and stabilizing earth sign Taurus, which should diffuse some of the lunar tensions from earlier in the day ever so slightly. The moon proceeds to make some tough planetary connections throughout the evening — including an alignment with Uranus and square-offs with both the sun and responsibility-focused Saturn. The former could cause volatile emotions to surface, but the latter aspects help us find our footing and remind us that these challenges are helping us to grow. There are brighter days ahead, even if this journey starts out tumultuously.

More like this
Here’s Your Astrological Forecast For February
By Nina Kahn
Your Ultimate Guide To Aquarius Season
By Brittany Beringer
Here’s Your Daily Horoscope For January 31, 2023
By Mecca Woods
When Is The Next Full Moon? Your 2022 Calendar
By Nina Kahn and Brittany Beringer
Get Even More From Bustle — Sign Up For The Newsletter
From hair trends to relationship advice, our daily newsletter has everything you need to sound like a person who’s on TikTok, even if you aren’t.