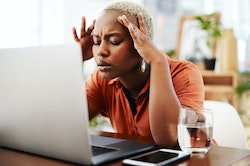 On today's episode of on "how can 2020 get any more chaotic?" I'd like to introduce you to Mars retrograde 2020, which begins its reign on Sept. 9 and lasts through Nov. 13. As the warrior planet of goals, ambition, and sex (among other intense things), Mars is the planet that drives us to take action — but during its retrograde period, all zodiac signs are going to struggle to assert themselves or find the motivation to take charge, which can make for a super frustrating two months. However, if you have a heads up on how Mars retrograde will affect you, you can learn to work with the energy rather than against it.

Retrogrades in astrology are a regular part of most major planets' cycle around the sun, but Mars takes a backspin least frequently of any other planet — only appearing to move backward once every two years. During Mars retrograde, we tend to feel more sluggish, unmotivated, and might struggle to take tangible action on things. It's not an ideal time to charge forward on major professional endeavors, physical work, or sexual pursuits. And the fact that Mars is in Aries during the duration of the retrograde is no help, as this is the zodiac sign ruled by Mars. When Mars is here, it naturally wants to be more energetic, bold, and assertive than usual — making the slow pace of the retrograde feel even more frustrating.

It's also a time that repressed rage and anger can come bubbling to the surface in less-than-healthy ways, so look out for old wounds getting reactivated. Finding productive outlets for aggressive energy during Mars retrograde is good — try taking a kickboxing class or going on a run, or perhaps even pouring your feelings into an artistic project. Embracing gentler ways of dealing with anger could prevent you from exploding on someone unexpectedly and also help you heal the pain of past losses or wrongs.

"This Mars retrograde is going to take a physical toll on all of us," astrologer Shawnte Cato tells Bustle. "As it’s moving through Aries (a sign which makes us want to take action now), we are going to be confronted with more waiting. This could bring about feelings of stagnation and repression, especially if you didn’t take action when Mars initially went into Aries [back in June]."

While Mars retrograde might test our patience, it's also a chance for all of us to learn to deal with our feelings in healthier ways and grow into a more powerful version of ourselves. Here's how Mars retrograde 2020 will affect your zodiac sign.

Because Mars is both your ruling planet and retrograding in your sign, this backspin might be hitting you harder than anyone else, Aries. It could mark a frustrating time as far as your self-expression goes, and it might feel like all your feelings are bottled up in a pressure cooker. Don't let them explode — instead, find some gentler outlets for your feelings and let them trickle out slowly. You'll come out the other side with a much clearer picture of who you are and what you want.

Not only are you feeling extra sleepy during this transit, you're also feeling like your intuition is off, as if you can't quite feel out your next moves like you normally would. Take it slow. Your subconscious mind is still figuring out what it wants and patience is a must. Just make sure you don't make a habit of showing up late for work during this transit — go to bed earlier to ensure you get the rest your mind and body needs.

If you've had some conflicts or drama within your friend group in the recent past, look out for a second wave to circle back during the next two months, Gemini. You may find yourself at the center of disagreements within your social life, which could lead you to unleash your frustrations on friends. Instead of blaming everyone else in your squad for the squabbles, make time to reflect on your role in the situation and take responsibility for your actions.

You've been feeling ultra-motivated in your professional life, Cancer, and have been taking tangible steps toward reaching some larger career goals. But during Mars retrograde, all that motivation turns to restlessness and you'll feel like you hit a stagnation point. Instead of trying to force out productivity, slow down and direct that energy toward planning your next steps with more precision and thoughtfulness. With a little patience, this transit can set you sailing in your work life.

Gathering knowledge, expanding your skill set, and exploring new realms has been a passion in recent months, Leo — but all of a sudden, it feels like you're not sure where to turn or what to make of the personal growth you've been doing. Don't take this lack of motivation as a stop sign. Rather, use this period to work on re-calibrating your personal compass. Once you feel more confident about your current worldview, you'll be able to see your goals with more clarity post-retrograde.

This is a good period to slow down and work on being more self-sufficient, Virgo. Mars retrograde could blur your boundaries, so it's not a good time to borrow money from someone, make promises you can't keep, or rely on others unnecessarily. However, don't jump to an extreme — putting up walls that shut people out or refusing help when you genuinely need it isn't the path either. Strike a healthy balance between setting boundaries and allowing for vulnerability.

Mars retrograde could bring up a lot of frustrations in your one-on-one relationships, Libra — so don't be surprised if past arguments between you and your partner resurface, or if unresolved issues with your boss come bubbling up again. Don't act impulsively or let your anger get the best of you when dealing with these issues. Give others the benefit of the doubt, as they probably feel the urge to defend themselves just as you do, so patience will help you get through it.

The harder you push over the next two months, Scorpio, the more exhausted and frustrated you're going to be. Mars retrograde is making it tough to get very far when it comes to our ambition or physical endeavors, and you're not going to overcome that by burning the candle at both ends. Don't overexert yourself trying to fight the cosmos — instead, spend your energy rearranging your schedule so that you can maximize time to be productive once the retrograde ends in November.

Over the next two months, it might feel like all the passion and motivation has been drained from your current creative projects — but that just means you'll need to come at these efforts from a different perspective, Sag. Try to lean into the parts of your goals that bring you pleasure, even if they're not the most productive aspects. Reconnecting with your inner joy without worrying about the results can leave you feeling rejuvenated and ready to creatively conquer post-retrograde.

This retrograde feels extra personal for you, Cap, as it's hitting the part of your chart that rules home and family — meaning that frustrations stemming all the way back to your childhood could come creeping up to the surface over the next two months. Don't try to distract yourself from these feelings, lest you risk an emotional explosion. Slowing down and getting real with yourself can help you turn down the heat on long-boiling anger, if you're willing to put in the work.

Mars retrograde is putting your constant flow of ideas on a standstill — which is especially frustrating for a mentally-driven air sign like you, Aquarius. It'll feel impossible to put your thoughts into action, and even conquering things on your basic to-do list could prove difficult. That said, work on refining your thoughts and short-term goals instead of trying to move mountains to bring them to fruition as-is. You might find that your to-do list looks totally different once the retrograde is over.

Pay attention to your bank account during Mars retrograde, Pisces, as money moves made now should be done with caution. It's not a good time to take a gamble or be impulsive with your cash, so avoid any last-minute purchases or bold investments. If your desire has lasting power and is still strong post-retrograde, that's a better time to take a risk and make some financial power moves. Until then, put your wallet on lock.