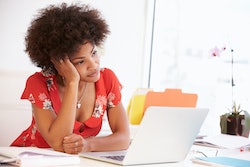 Mondays are almost always a headache, but fair warning, friends: The astrology of this week is shaping up to bring a particularly frustrating start. That's because on Monday, August 24, hot-headed Mars and pessimistic Saturn will square off with each other, resulting in some frustrating start-of-the-week roadblocks that'll make it feel nearly impossible to meet our goals on the timeline we'd hoped to.

So let's break down the planetary meet-up that's throwing a cosmic wrench in our meticulously-planned week. Mars is the goal-oriented planet of ambition, and Saturn is the planet of restriction and responsibility. Saturn is currently retrograding in the determined sign of Capricorn, which is motivating us to work our heads off to reach our goals. Pair this with the energy of Mars in Aries, and all zodiac signs are feeling inspired to charge toward what they want, regardless of the consequences. In other words, we're fully ready to chase our goals and put in the work needed to succeed. That's great, right?

Well, not so much right now — because Monday isn't the day for progress, my friends. With these two antagonist planets crashing into each other in a harsh square aspect just after 11 a.m. PT/2 p.m. ET, it'll feel like we're stuck in a pit of quicksand. We're likely to hit roadblocks at every turn — it'll feel like the harder you try to get somewhere, the further away your destination becomes. This transit makes getting things done feel like riding a bike with the brakes locked.

There's an element of futility to this aspect, because all we'll want to do is kick off the week with a bang, but doing so will be virtually impossible — which makes this sudden obstruction all the more frustrating. The harder we push, the crankier we'll end up acting, so the best thing to do is press pause on any attempts to make power moves this week and take note of the roadblocks so you can work around them later.

And it's not just the immobility in our goals that'll drive us up the wall — this frustration is likely to bleed into our interpersonal relationships, too. "Our actions will be based on inner frustrations, leading to negativity and resentment with others," astrologer Lisa Stardust tells Bustle of the Mars/Saturn square. "We must overcome this — one way [to do so] is to break walls down and move toward freedom in relationships." Relinquish your need for control right now and try to embrace a more go-with-the-flow attitude.

The energy of this angsty Mars/Saturn clash will dissipate as the week goes on, but keep in mind what sorts of roadblocks appeared in your path — because this is actually the first of two Mars/Saturn squares that will take place this year. The second one rolls back around in a month, on September 29, after Mars begins its dramatic retrograde period. Because we'll be revisiting these very same themes (and forced to deal with the very same barriers) once again, it'll behoove you to pay attention to the lessons the planets are teaching you — even if they're temporarily hindering your current plans. Stay in it to win it.

As we look toward the rest of the year, the astrology of 2020 is chock-full of Mars drama, so get used to the feisty roller coaster of feelings that this assertive planet brings — and treat yourself to that extra cup of coffee this week. You'll need it.