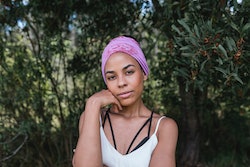 There's a much-needed fresh start headed our way, and it comes in the form of the November 2020 new moon, which peaks on the night of November 14 (or technically, the early hours of November 15 if you're on eastern time). This lunation takes place in the realm of the deep, dark sign of Scorpio, so we're going to be asked to face our shadow sides and get real about our fears — but it's also a chance to embrace a spiritual new beginning. Everyone will feel the intensity of this powerful lunar moment, but for the zodiac signs least affected by the November 2020 new moon, the energy might flow even more smoothly.

New moons in astrology are almost always an auspicious time for fresh starts, and this one is no exception. While there are some tense planetary clashes taking place alongside this lunation, the new moon itself will be making some really favorable connections. "This moon makes positive aspects with Jupiter and Pluto, increasing our abilities to connect with others on more meaningful levels," astrologer Leslie Hale of Keen.com tells Bustle. "With this, we will have the ability to transform many things. It won’t be easy, but the energy is there."

Are you ready for a new beginning? The few lucky zodiac signs the November 2020 new moon will affect the least are in for an easier shift into a new chapter.

It's not that this new moon won't affect you, Aries — it's just that you'll be riding such a high that the darker elements of this lunation won't be able to put a damper on your energy. With your ruling planet Mars having just gone direct in your sign after a several-month-long retrograde, you're experiencing a burst of energy and motivation. That said, the new moon is calling your attention inward, asking you to face your demons head-on and get real about the darker sides of your motives, desires, and relationships. This is tough work that requires lots of self-honesty and vulnerability, so while you shouldn't underestimate its seriousness, you should also remember the power you have to accomplish virtually anything you put your mind to right now.

This new moon is asking you to look at your communication style from a deeper perspective now, Virgo — and with your ruling planet Mercury coming out of its retrograde shadow and clearing away some of the brain fog, getting in touch with this part of yourself will be a lot easier. However, you'll find that your daily connections and interactions with the world around you will feel charged with an emotional rawness and depth that you're not quite used to, and this sense of vulnerability could feel uncomfortable. Embrace it! Instead of allowing this energy shift to affect your sense of self-worth, remember that feelings are important, even if they're not facts.

Life might feel like a bit of a haze during this new moon weekend, Sagittarius, and it's important to honor that by carving out time for rest and solitude so you can really lean into your daydreamy energy. No matter what kind of stressors have been fraying your nerves lately, know that you can retreat into your inner world to start solving them. Embracing meditation, dream journaling, or even just extra time for sleep during this period will give your soul the space it needs to clear out old baggage and begin anew. Your fiery energy is typically social and outgoing, but during this lunation, embrace the watery nature of emotions instead.