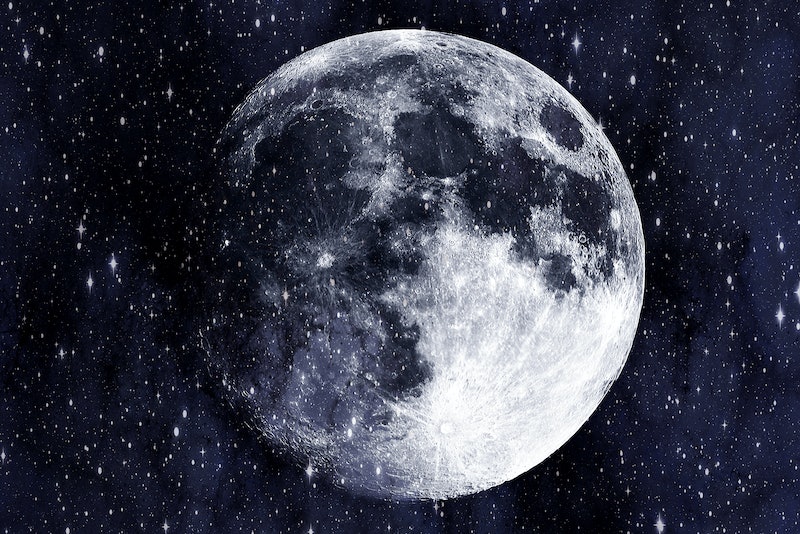 Where are all my moon babies at? The moon in astrology is considered one of the most important and influential "planets" in the solar system (yep, it's considered a planet in astrology, but not astronomy), which shouldn't surprise us too much. After all, it's the planet that's positioned closest to us here on earth, and the one that we can easily see in the skies almost every night. The moon's constantly-shifting face has a big effect on our moods, our emotions, our energy levels, and our personal growth — so understanding the cosmic symbolism of the moon cycle (specifically the new and full moons, which are the most powerful moments of the monthly transformation) is one of the most useful ways to dip your toes deeper into the mystical pool of astrology. Learning how to work with the full moon and new moon energy is a fun and fascinating way to get a little more spiritual and align your goals with the cosmic energy that's around you.

In astrology, the moon represents the most intimate sides of ourselves: our emotions, moods, instincts, feelings, memories, vulnerabilities, and our sense of safety and comfort. It's the nurturing astrological mother-figure of the zodiac and is symbolic of our private inner worlds. Unlike most planets in astrology, the moon is visible nearly every night — making it a much more tangible astrological marker for us to track through the skies and align ourselves with. The moon also visibly changes its form from our vantage point most dramatically (as its moon phases are obviously super apparent to the naked eye) and it moves through the zodiac the quickest, too — spending about two and a half days in each sign, and zipping through all twelve in about 28 days — which can astrologically account for our ever-changing moods and energy levels throughout any given month.

Let’s take a look at how the monthly lunar cycle works and exactly how we can work with it to maximize our manifestation powers and make sense of the astrological energy that's constantly thrust upon on.

Every month, the cosmos offer us a beautiful opportunity to set goals for ourselves and connect with astrology by way of the lunar cycle, which is always highlighted by its two standout lunations: the new moon and the full moon. Each lunar cycle always begins with a new moon, which then waxes (or grows larger) for about two weeks until it climaxes with a full moon. From there, the moon wanes (or grows smaller) for about two more weeks until the end of the cycle, at which point the moon is “new” again and a fresh cycle begins. During the lunar cycle (which lasts for about 28 days), the moon travels through the entire wheel of the zodiac and changes shape in the sky based on its relative position to the sun and earth.

While the new and full moons may be the most energetically intense and important moments of the lunar cycle, they each bring a very different set of advantages and disadvantages. And while the energy varies based on what sign the moon is in and whether it’s forming any aspects to other planets, you can pretty much count on this: New moons mean new beginnings, and full moons mean release. There are other things to consider, of course, but this is generally a good way to simplify things. Here’s a breakdown on new moons versus full moons and how you can best work with their energy during any given month.

Welcome to the very beginning of the lunar cycle — which brings us the energy of a fresh start and a chance to set new personal goals. The new moon brings us a cosmic clean slate on a monthly basis that allows us to reset, recharge, and refocus.

A new moon (which is sometimes called a dark moon) is the first phase of a new lunar cycle during which it aligns with the sun and is virtually invisible in the night sky. Because new moons take place at the very start of the moon cycle, they bring the energy of new beginnings and fresh starts. Astrologically, this is a good time to plant seeds for a new endeavor, take the first steps toward a new goal, or start manifesting something you want to bring into your life. New moons obviously bring darker nights, so they're also considered an optimum time for quiet inner reflection, allowing you time to go inward, be more introspective, and get in touch with your goals. You may feel less social, and that’s OK! Taking some solo time under a new moon can help you slow down, touch base with yourself, and focus your energy on your personal affairs.

New moons represent new beginnings, of course, but there’s a flip side to that coin, which are endings. Because the new moons usher in a new cycle, we simultaneously close the door on an old one — so there can be an almost bittersweet and wistful quality to a new moon's energy, forcing us to think of things we've left behind as we embark on new adventures.

Set some mystical intentions or perform a new moon goal-setting ritual to take advantage of the new moon vibes.The lunar energy at this time of the month is all about building and growing — it’s supercharged with hope, possibility, and momentum — so if you start a project or focus your energy on something new under a new moon, you’ll likely feel some extra momentum and wind in your sails as you move forward (and be even more likely to put in the work and succeed!).

The big, bright, and beautiful full moon: indeed the most notorious, spectacular, and iconic moment of the lunar cycle. The full moon is a time of illumination (both literally and figuratively), as well as culmination that can help us bring energy to a head, see the fruits of our labor, and pick up on things with more clarity.

A full moon is the midpoint and climax of the lunar cycle, during which the moon is opposite to the sun in the zodiac and is therefore fully illuminated by its light. Full moons are even more notorious than new moons in mainstream culture, as they’re often associated with chaos and intensity — and that reputation isn’t for nothing! Because full moons are the brightest and boldest moment of the lunar cycle, they bring an energy that’s just as extreme. Full moons can make us feel more energized and social (although conversely, all the intensity can also drain us of energy and leave us feeling exhausted!), and push our energy outward, making us more focused on interpersonal affairs and outside situations. They also bring a sense of illumination, helping us to see situations for what they are and bringing to light information that may have previously been hidden. Keep your eyes and ears open during a full moon if you're looking for cosmic guidance.

While new moons are ideal for setting goals and beginning new projects, full moons are more about bringing projects that are already in progress to a tipping point. These luminaries are buzzing with intensity, so rather than beginning something new, this climactic energy asks us to bring something that's already building to a high point and get our already-laid-out plans in motion.

There’s also another very important aspect to the full moon: release. Full moons may be the brightest point in the cycle, but from this point forth, it’s all about shedding. As the moon wanes and gets smaller over the coming two weeks, its energy will support you in releasing bad habits, toxic patterns, or situations that you're ready to leave behind. If you have intentions related to releasing and shedding things, you can set these on the full moon instead of the new moon and feel extra cosmically supported. Plan a full moon release ritual for maximum benefits.