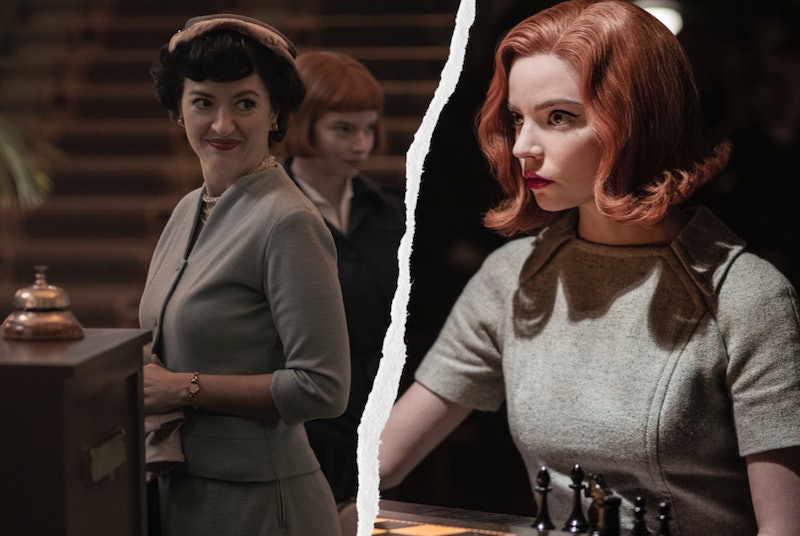 Within just four weeks of its release on Netflix back in October 2020, The Queen’s Gambit became the most-watched scripted miniseries on Netflix. The 1950s-1960s period drama, following a chess prodigy on her rise to fame, captured the hearts of viewers as swiftly as Beth Harmon captured her opponents’ chess pieces.

Now, the “orphan girl chess drama” has reemerged into the zeitgeist after it dominated the Emmys — not just in awards, but also in time. (We’re looking at you, director Scott Frank, who was played off by music three times before ending his acceptance speech.) With plenty of hilarious internet memes inspired by the Queen’s Gambit crew at the Emmys, and our undying fandom of Anya Taylor Joy still going strong, the series has remained fresh in our minds.

If you’re still deciding on your next move for Halloween, don’t just sit there and let the chess clock run out. Start your night out as boldly as Beth’s Sicilian Defense move by stepping out in a Queen’s Gambit Halloween costume. Whether you want to dress as Beth herself, or want to make your beau one of the many hunks of the Queen’s Gambit, there’s plenty of pawns for you to play as.

One of the key components of Beth Harmon’s appearance is her shiny red bob — though you won’t want to forget her signature smirk for when you crush your costume contest opponents in this look. Brush up on your chess skills and learn a bit of Russian to really get into character, but swap the green pills for Tic Tacs if you’re in need of a prop.

So, there’s a chance you might get mistaken for Indiana Jones in this costume. Or, better yet, as the kid from Love Actually. Either way, Benny’s wacky style is the perfect Halloween costume option if you’re looking to keep some people guessing this All Hallow’s Eve. Plus, with Benny and Beth’s unique relationship trajectory, they’re the perfect “enemies to lovers” couple costume.

Though we got to watch Jolene grow from childhood into adulthood from the start of the series, it’s no secret that many viewers still wanted to see and learn more about Jolene as a character. If you’re a Jolene fan yourself, then stepping into her late-season style is the perfect nod to her development as she pursues her career in law.

Here’s a sweeter take on the mom-ager archetype. Alma’s style adds a bit of a retro ‘50s touch to the ‘60s aesthetics of the show, making this a perfect costume if you’re itching to wear pill box hats or fascinator.

If you’re going for late-season Harry Beltik over early-season Harry, the main difference will be whether you put in some fake teeth. Regardless of his changes in appearance, Harry remains a steadfast supporter and admirer of Beth Harmon throughout the series, making him a likable character to emulate.

Men's Casual Corduroy Jacket
Amazon
S-XXL
Amazon Essentials Men's Slim-Fit Long-Sleeve
Amazon
XS-XXL
Dickies Men's Slim Taper Stretch Twill Work Pant
Dickies
30-38
Marino’s Men Genuine Leather Dress Belt
Amazon
30-60
More like this
8 Things You Can Do To Appreciate Lunar New Year
By Elizabeth Tsung
8 Charities To Donate To During Black History Month
By Alexis Morillo
6 Organizations Fighting Police Brutality That You Can Support Right Now
By Syeda Khaula Saad and JR Thorpe
Ashamed Of Your Screen Time Stats? Here's How To Change That
By Alexis Morillo
Get Even More From Bustle — Sign Up For The Newsletter
From hair trends to relationship advice, our daily newsletter has everything you need to sound like a person who’s on TikTok, even if you aren’t.