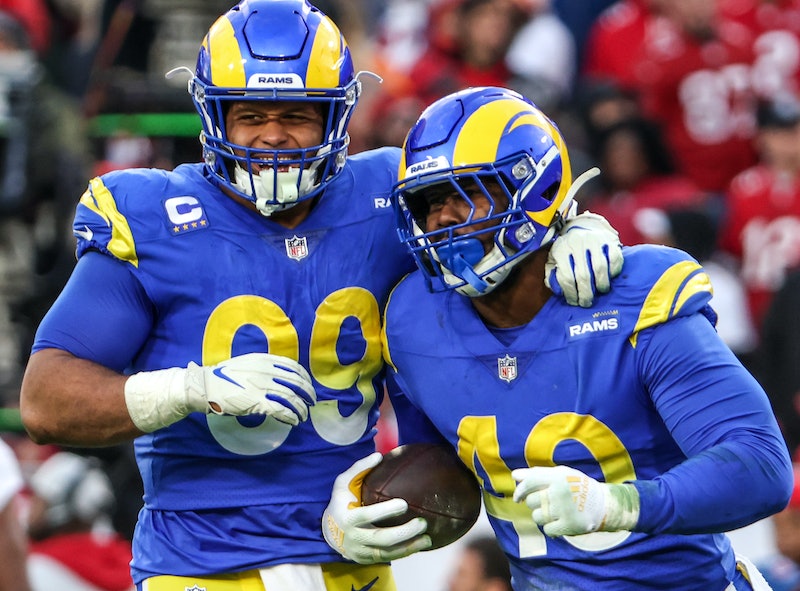 While diehard football fans might have gotten their fix of NFL-inspired memes all season long, there’s no denying that the Super Bowl makes for peak football content for the rest of us. But few NFL fandoms have had as much to boast about online as that of the Los Angeles Rams, who beat the Cincinnati Bengals in the 2022 Super Bowl.

After all, what’s more meme-worthy than thwarting Tom Brady from his last-ever chance at going to the Super Bowl? And, while Bengals fans were dissing on the Rams’ fan turnout at games, the Rams held bragging rights with a 15-5 standing and an undeniably better track record than the underdog opponents.

Whether it’s more trash-talking, or bragging rights as the Super Bowl winners, there’s sure to be plenty more memes for Rams fans to enjoy. Even if you just tuned in for the snacks, commercials, and Halftime show, the internet never fails to offer some humor for everyone come Super Bowl night. (See: The Weeknd halftime special memes from last year.)

Here are some of the best Rams memes to share with your group chat or on Instagram.

Just as Bengals quarterback Joe Burrow has caught comparisons to actor Macaulay Culkin, Rams quarterback Matthew Stafford has been pegged as a doppelgänger of Tesla founder Elon Musk. The jury is out on whether the Rams have any secret plays named “the Hyperloop.”

With a stacked roster including franchise players like wide receiver Odell Beckham, Jr., the Rams had every strength needed to secure the Super Bowl victory. And the Bengals, well... they had quarterback Joe Burrow.

The bigger they are, the harder they fall. However bitter Tom Brady haters may be, the fact that the Rams took down the NFL giant in his last playoff game is eternally brag-worthy in many fans’ eyes.

A meme within a meme — a meme-ception, if you will. Many viewers at home were confused by Odell Beckham Jr.’s touchdown celebration against the Arizona Cardinals in December. However, any TikTok fan knew that it was a reference to the meme-ified Detroit Urban Survival Training TikTok. As usual, OBJ was clearly thinking quickly on his feet with this one.

5. They Almost Had It

If you really want to cause a stir, send this to your friend who rooted for the Bengals.

If Stafford’s your superhero, celebrate the winning quarterback with a cute pun.

Post this one in your group chat to start some drama.

Send to your fellow Rams lovers for a bonding moment.

Your Rams group chat will get it.

Send this to your friend who had a Drake-like reaction.

It’s enough to make you tear up all over again.