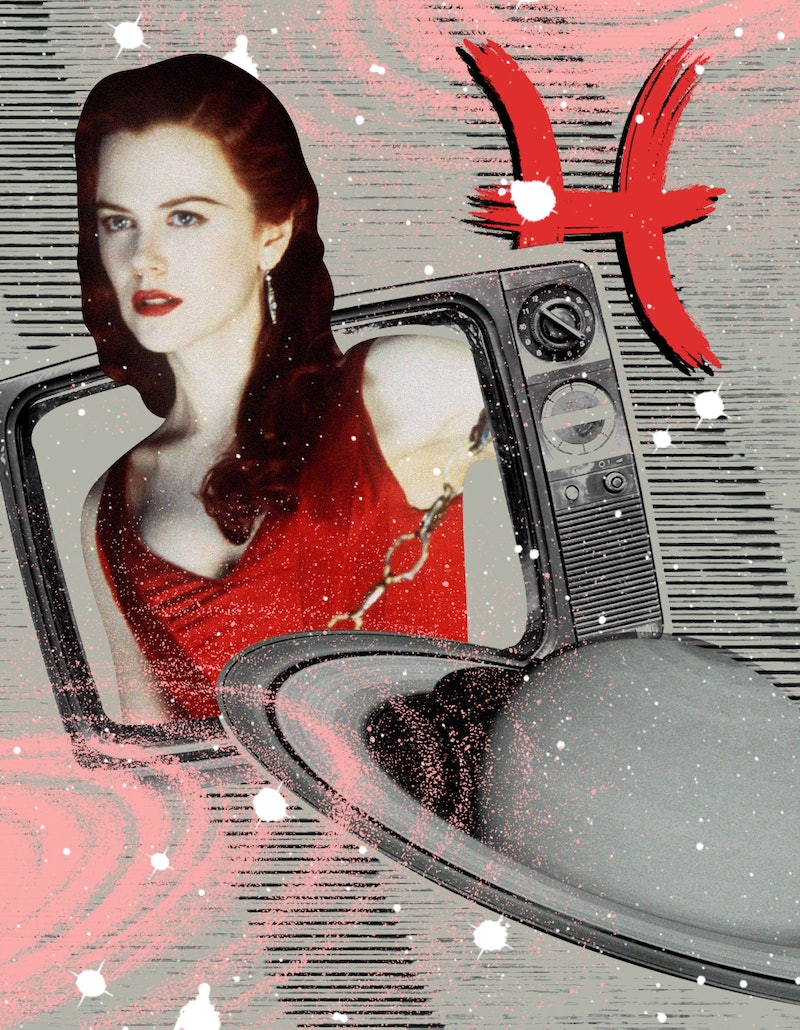 In Astrologically Speaking, astrologers make their case for your favorite character's zodiac sign, based on specific scenes, quotes, and even fashion choices. Here, Nina Kahn, author of Astrology for Life and Wander the Stars, explains why Satine of Moulin Rouge! is a total Pisces.

Cue up the Y2K version of “Lady Marmalade” — because everyone’s favorite jukebox musical, Moulin Rouge!, turns 20 years old this year. As an astrologer revisiting the 2001 film, I can’t help but pick up on the heavily-dreamy Pisces energy emanating from the whole production — but especially from Nicole Kidman’s character Satine, the “sparkling diamond” of club Moulin Rouge and the star of the film.

In case you need a refresher, Moulin Rouge!’s plot centers around the love story between two young bohemians in 1899 Paris: Struggling but still-romantic writer Christian and dazzling dancer and star courtesan Satine. Satine’s emotional journey through the film is one filled with Piscean ideals of romanticism, creativity, dreaminess, and transcendence. While we can’t know for sure what Satine’s birth chart looks like, I’ve got some compelling evidence to prove that she’s almost certainly born under the sensitive sign of the fish.

Moulin Rouge! is, above all, a love story — and part of what makes it such a powerful one is the fact that Satine and Christian fall in love with each other almost immediately upon meeting. Pisces are the zodiac’s most idealistic dreamers, so love at first sight is common for these sentimental water signs (especially if it involves an amorous poet, like Christian — Pisces love poetry!).

Satine’s initial profession of love was certainly fueled by her false impression that Christian was a wealthy duke — she had planned to seduce him even before meeting him in order to gain funding for the Moulin Rouge and bolster her career. But like a true Pisces, she couldn’t help but wear her tender-hearted feelings on her sleeve. Unsurprisingly, the fateful night of their meeting ends with Satine looking into Christian’s eyes on a rooftop, singing lines from “I Will Always Love You” while fireworks explode in the backdrop of their first kiss. Only a Pisces could fall this hard, despite their best efforts to talk themselves out of it.

We see this evidenced yet again when later in the film, Moulin Rouge showrunner Harold Zidler tries to convince Satine not to run away with Christian and abandon their deal with the duke. She refuses to accept his plea, stating “He loves me, and that is worth everything.” This marks a true Pisces moment for Satine, as this water zodiac sign places more value on matters of the heart than the head. Satine is no longer concerned with what makes sense financially or practically and is plain that the intangible and fleeting feeling of love is literally “worth everything” to her.

2. Her Pisces Energy Makes Her Adaptable, But Lacking Some Boundaries

Satine is caught in a complicated entanglement. She’s in a loving affair with the impoverished but creative Christian. At the same time, she has been betrothed to the wealthy but wicked duke in exchange for his investment in the Moulin Rouge and her acting career — forcing her into a tug of war between her head and her heart. But as a mutable zodiac sign, Satine’s Pisces is flexible and can handle the changing circumstances of her situationships. For most of the film, she’s able to string along the duke, keep Zidler appeased, and continue her romance with Christian. Juggling these dynamics and having to keep up an illusion may be hard for some, but a mutable Pisces who’s following their heart can make it look easy.

But keeping up the charade sometimes led to sacrificing her desires, whether by having to offer up her body to the duke or tell Christian that she didn’t love him when she really did. This adds up astrologically, as Pisces often struggle with boundaries. After all, they’re represented by the symbol of the fish — the only zodiac animal that lives entirely under the sea, where everything blends together. It can sometimes be difficult for Pisces to set hard limits. Their idealistic nature can make them people-pleasing, which explains why Satine does her best to cater to everyone’s will, even if it’s sometimes to her own detriment.

3. She Lives In A World Of Dreams, Symbols, & Illusions

Let’s talk about Pisces’ ruling planet Neptune for a moment, because Satine perfectly embodies the Neptunian vibe. Neptune is the ruler of all things illusive and symbolic, such as deception, fantasy, mysticism, and blurred lines. All of these qualities are important aspects of Satine’s life in the film, as well as the dreamlike image she creates as a nightclub performer. The makeup, hair, costumes, and impossibly fantastical sparkle of the Moulin Rouge are all deeply Neptunian. She also creates illusions of love for men as a courtesan, and she inspires boundless creativity from artists like Christian, who centers Satine (and his feelings for her) in much of his work throughout the film.

But like a true starry-eyed Pisces, she also has her sights set on something more magical than the Moulin Rouge: She wants to be a “real actress” — a sentiment she expresses wistfully at multiple points in the film. This makes sense, given that Neptune also governs things like Hollywood, films, and movie magic. (Her dream of being an actress ends up being more of a fantasy than a reality, which is a very Piscean story arc, too.)

Like a true Pisces, Satine’s energy in the film is ethereal and transcendental. She lives on as the “sparkling diamond” even after her death through the power of art and symbolism: “Tell our story, Christian,” she asks of her lover as she’s dying in his arms, “That way, I’ll always be with you.” Pisces always channel their deep well of feelings into meaningful creativity — and Satine does exactly that.

“Seasons may change, winter to spring,” sings Satine on several occasions. “I love you ‘til the end of time.” Of course, Pisces is the very zodiac season that transitions us out of winter and leads into the spring equinox (the beginning of the astrological year). As the twelfth and final sign of the zodiac, Pisces energy holds the power of endings, as well as the idealism to keep hope of new beginnings alive — all of which is reflected in Satine’s story. She was a dying woman — she succumbs to death by tuberculosis at the end of the film — who never lets go of her dreams or her romantic feelings.

More like this
Andie From 'How To Lose A Guy In 10 Days' Is A Total Gemini
By Nina Kahn
Here’s Your Daily Horoscope For February 1, 2023
By Mecca Woods
These 3 Signs Are The Master Chefs Of The Zodiac
By Kristine Fellizar
When Is The Next Full Moon? Your 2022 Calendar
By Nina Kahn and Brittany Beringer
Get Even More From Bustle — Sign Up For The Newsletter
From hair trends to relationship advice, our daily newsletter has everything you need to sound like a person who’s on TikTok, even if you aren’t.