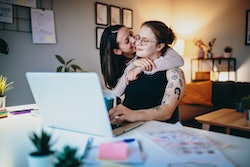 When Taurus and Pisces get together, it’s a match made in heaven. The zodiac’s practical bull isn’t one to believe in love at first sight, but the sensitive Pisces will turn them into a believer. Their relationship is a nice blend of romantic Venus and dreamy Neptune energies, and together these two can enjoy a long-lasting relationship filled with love, affection, and emotional depth. Taurus and Pisces’ zodiac compatibility will give you insight into why this soulmate match works so well.

“Taurus and Pisces are an amazing match,” Kristina Semos, astrologer and owner of AstroOils, tells Bustle. “They have enough in common that they gel, but they have enough differences that they don't step on each other's toes in a relationship. It’s easygoing and comforting.”

As a fixed sign, the earthy bull will bring stability, sensuality, and practicality to the relationship, while the fish, a mutable sign, will bring creativity, empathy, and fun. Both Taurus and Pisces value romance and tend to put their whole heart into their relationships. Taurus will be with someone who truly makes them feel seen and heard, and Pisces will have someone to ground them and make them feel safe. “It’s sweet and flowing, romantic and supportive,” Stephanie Gailing, astrologer and author of The Complete Guide to Astrological Self-Care, tells Bustle. It’s a partnership that “embodies soulfulness.”

Keep reading to find out more about Taurus and Pisces' compatibility in relationships, sex, dating, and friendship.

Sexually, Taurus and Pisces can be an enchanting match. “Taurus can help dreamy Pisces to feel soulfully embodied while Pisces can help earthy Taurus to open up to their imagination and fantasies, using them to make their sex life even more satisfying,” Gailing says.

As a water sign, Pisces is naturally sensitive and intuitive. In bed, they’re attentive and in tune with their partner’s needs. Taurus will love having a partner whose focus is solely on them. Bulls truly enjoy going the extra mile to create romantic environments, which will please their Pisces partner to no end. Slow, gentle, and sweet is what this couple is all about. Expect lots of cuddling afterward.

When it comes to their emotions, both Taurus and Pisces are slow to open up. According to Semos, Pisces is more in touch with their emotions and would most likely share their feelings first, which will help Taurus feel more comfortable about sharing theirs. However, Pisces can be a bit hard to pin down, which may aggravate the bull. “Luckily, Taurus can be patient and play the long game,” Semos says.

They’re both nurturing, attentive, kind, and caring. Once trust is established in the relationship, neither partner will hold back. According to Gailing, “They both derive pleasure in expressing love and taking care of another.” Pisces will always make sure that Taurus’ emotional needs are met, and Taurus will help the more selfless Pisces recognize that it’s OK to express their needs as well.

Taurus and Pisces won’t have too much trouble communicating as they balance each other out. According to Emily Newman, astrologer and psychic, Pisces is calm and kind. They tend to put others before themselves and will give Taurus space to be themselves. Taurus, on the other hand, will appreciate having someone who is patient, supportive, and will listen to them whenever they need to vent. “Both are similar to sugar and spice,” Newman says.

In a Taurus and Pisces relationship, Taurus is the “alpha” in the relationship and Pisces is OK with following along. The bull can also get pretty stubborn and set in their ways, which won’t really bother Pisces since they tend to go with the flow. “With their calm demeanor, Pisces can deal with stubborn Taurus,” Newman says. Taurus is also patient enough to stick it out with Pisces, even when they get into one of their moods.

When it comes to friendship, Taurus and Pisces are a solid match. In fact, astrologer Clarisse Monahan tells Bustle, they’re two signs away from each other on the zodiac wheel, which means there’s a harmonious sextile aspect between them and it’s easy for them to get along. They’re the type of duo who’ll meet for the first time and become BFFs after five minutes.

According to Monahan, the bull and the fish have a cosmic similarity in Venus. “Venus rules Taurus and is exalted in Pisces, which ... emphasizes that these are two signs who lead with harmony,” she says. “They both appreciate a Venusian approach to life with much emotional rapport.”

In nature, their elements — earth and water — go well together. When applied to Taurus and Pisces, the bull will provide Pisces with the stability it needs, while Pisces will bring out Taurus’ sensitive sign by encouraging them to share their feelings. “This tends to be an easy street connection from the start, both feeling an intuitive rapport with the other that is difficult to match,” Monahan says. “This is a great friendship that can last the test of time.”

When it comes to dating, Taurus and Pisces will have no problem taking things to the next level. According to Stina Garbis, a professional astrologer and psychic, Neptune-ruled Pisces is caring, emotional, and has a lot of space in their heart for Taurus. They’ll also know how to calm them down when they’re angry or being stubborn. The bull, on the other hand, loves hard, cares very deeply, and has a lot of patience for Pisces, who can sometimes be a tad bit chaotic.

“These are two very romantic signs,” Garbis says. “Taurus is very passionate and loves PDA and Pisces enjoys being loved. They have no problem sharing secrets and intimate moments, and they’ll enjoy relaxing and getting to know each other. They’ll become fast friends and fast lovers.”

As an earth and a Venus-ruled sign, Taurus can seem more materialistic than Pisces. The water sign won’t really understand Taurus’ need to splurge on luxurious weekend trips or expensive gifts when all they want is to spend time together. Pisces will show Taurus that there’s more to life than money and material goods, and Taurus’ calming presence and reliable nature will give Pisces the opportunity to relax and forget about anything troubling them.

Taurus is pure earth energy. They’re practical and grounded, especially when it comes to finances and time management. Pisces, on the other hand, tends to live with their head in the clouds. Taurus may get frustrated at how chaotic and go-with-the-flow their partner can be, and Pisces may get bothered by how Taurus constantly dampens their mood.

Pisces likes to do whatever feels right in the moment. They like moving without having any real destination in mind, and they don’t really like answering anyone if they don’t feel like it. This can make their Taurus feel insecure in the dating stage of their relationship, who likes having a sense of control over everything. It doesn’t matter how many times Taurus asks, Pisces may put off fully committing to the relationship until they finally decide they’re in the mood for a relationship.

“It's amazing how many words can come out of Pisces' mouth that doesn't actually objectively answer a single thing,” Semos says. If these two can work on being more direct with their communication, this shouldn’t be a big issue in their relationship.

Despite their potential problem areas, Taurus and Pisces are still one of the best zodiac matches. They feel similar ways about love and romance and make a well-balanced pair. As Gailing says, “These two are quite compatible and have a great potential to be practically magic.”

This article was originally published on April 1, 2021