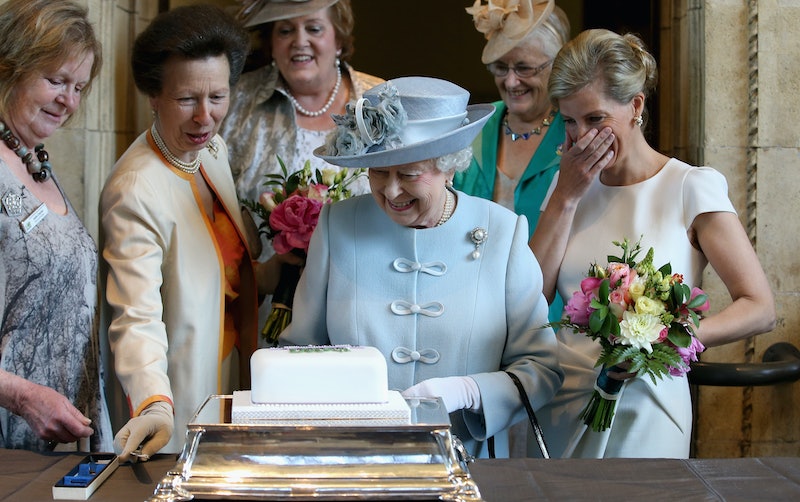 “Fit for a Queen” might be a common phrase used for delicious and delectable meals, but our own monarch Queen Elizabeth tends to prefer a simple diet to keep her fit when she’s at home. That being said, Her Majesty does have a royal chef that we commoners naturally don’t have access to. The royal chef will send three menu suggestions for every meal in the week – written in French since Queen Victoria’s reign, when her French head chef insisted on French cuisine and handwritten menus handwritten in the language – to Her Majesty’s Page, and she will tick her preferences and cross out the rest. So what is on the menu for a monarch? Here is everything to know about what the Queen eats in a typical day.

The Queen’s day starts at 7:30 a.m., when tea and biscuits are brought to her bedroom. A maid will carry a tray with two solid silver teapots, one with Earl Grey tea and the other with hot water, a China teacup and saucer, and a linen napkin embroidered with her royal initials. Her Twinings tea is served with two biscuits and milk (poured first, of course) as she listens to the Today Programme on Radio 4 on her Roberts DAB radio, per Mail Online.

After a morning bath and getting dressed, the Queen takes breakfast in her private dining room at 8:30 a.m. Per The Telegraph, Her Majesty enjoys cereal and fruit for the most important meal of the day. Kellogg's, Quaker Oats, and Weetabix all hold royal warrants, but the Queen is partial to Special K, according to Darren McGrady, a former royal chef. The monarch also reportedly uses tupperware to store cereal, as she believes it keeps it fresher.

When not having her usual cereal and fruit, the Queen will sometimes choose to have toast and marmalade instead, and occasionally even enjoys scrambled eggs with smoked salmon with a finish of grated truffle. However, according to McGrady, she is too “frugal” to ever order truffles for herself regularly and “only really enjoyed them at Christmas when the truffles were sent as a gift.” Her Majesty also prefers brown eggs, as she thinks they taste nicer, per The Guardian.

By 9:30 a.m., the Queen is at her desk ready to do her paperwork for two hours, per Mail Online. Before lunch comes around, usually served at 1 p.m., she enjoys a gin and Dubonnet (a sweet wine-based aperitif) with a slice of lemon and a lot of ice. Gordon’s is Her Majesty’s gin of choice, which also has a royal warrant, per The Independent.

Sadly the Queen isn’t a “foodie,” says McGrady, and instead “eats to live”. Lunch is usually a meal of fish and vegetables, such as a grilled Dover sole, on a bed of wilted spinach or with courgettes, or simple grilled chicken with salad. “When she dines on her own, she’s very disciplined,” added McGrady, “No starch is the rule.”

“Kippers, in a number of uncomplicated variations, have remained a favourite with the Queen ever since – for breakfast, as a savoury, or a late-night supper,” royal servant Charles Oliver revealed in his book, Dinner at Buckingham Palace. Oliver revealed how Her Majesty and Princess Margaret had smelt the dish when they were at Windsor Castle during the war years, and traced the smell to its source, “outside the private kitchen of Mrs Alice Bruce, then housekeeper at the castle.”

“They politely knocked on the door and were welcomed into the old-fashioned kitchen with its great iron oven range – and its frying kippers. Mrs Bruce gave the princesses their first taste of kippers, and showed them how to cook the fish as well,” Oliver added.

Afternoon tea is a daily fixture, and often comes with the Queen’s favourite chocolate biscuit cake, which was also served at Prince William’s 2011 wedding reception, made with McVities Rich Tea biscuits. Finger sandwiches with fillings such as tuna and cucumber, smoked salmon, egg and mayonnaise, or ham and mustard are served with the crusts removed, as well as jam pennies – raspberry jam sandwiches cut into circles the size of an English Penny, per The Telegraph.

Speaking of chocolate, “she loves it,” McGrady told The Telegraph. As well as her favourite chocolate biscuit cake, the Queen also enjoys chocolate mousse and a chocolate ganache sponge cake. Charbonnel et Walker, Bendicks, and Prestat all hold royal warrants, but her preference is dark chocolate, McGrady told Reader’s Digest. “She’s not a big fan of milk or white chocolate,” he went on to say, noting that the queen prefers bars that are 60% cacao or higher.

According to Margaret Rhodes, the Queen's cousin, Her Majesty's alcohol intake rarely varies. As well as her gin and Dubonnet at lunch, the Queen will drink a dry Martini before dinner, and a glass of champagne in the evening.

Dinner usually consists of fillets of beef or venison, pheasant, or salmon from farms in Sandringham and Balmoral. Fillets are turned into Gaelic steak, well-cooked and served with a sauce of mushroom, cream, and whisky.

For dessert, the monarch enjoys home-grown treasures such as strawberries grown at Balmoral, or the white peaches that are cultivated in her Windsor Castle greenhouses, followed naturally by a glass of dry champagne. Oh, the life.

More like this
M&S Is Selling A Corgi Version Of Colin To Toast The Queen’s Platinum Jubilee
By Sam Ramsden
Heinz Is Selling A Sprayable Mayo Mousse
By Maxine Harrison
Charlotte Tilbury Just Launched A Royal Collection To Mark The Queen’s Platinum Jubilee
By Tomi Otekunrin
How To Master Baby Braids, According To TikTok
By Tomi Otekunrin
Get The Very Best Of Bustle/UK