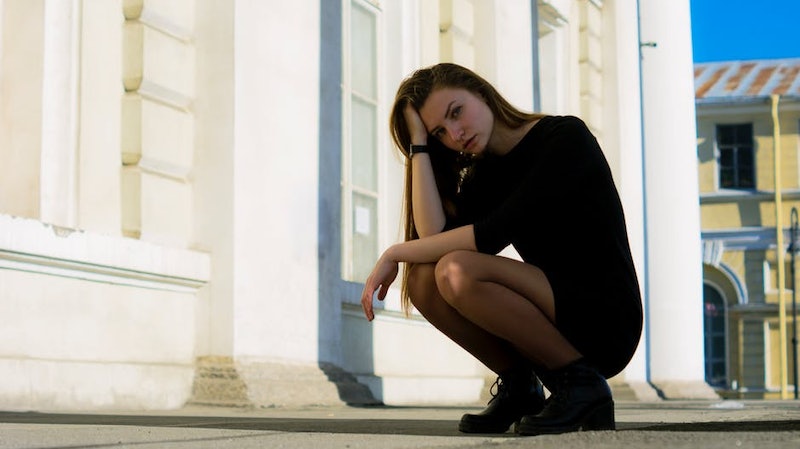 If it seems like bad luck follows wherever you to, it may be one of the many signs you're giving off pessimistic energy. This type of negativity can hold you back in life, since you're always looking on the not-so-bright side. It can attract more negativity, since pessimism tends to beget pessimism. And — if your vibes are strong enough — it can even push people away and ruin relationships.

Which, if you've ever been around a truly pessimistic person, actually makes a lot of sense. "People subconsciously and consciously pick up on vibes," says life coach and author Kali Rogers. "People are highly aware of that. So they protect themselves ... by selecting carefully who they associate with."

If you're not naturally optimistic, that may seem unfair. But keep in mind this isn't about being overly cheerful. "Being an optimist isn't about ignoring all the terrible things that are happening around us — it's learning not to focus on them," Rogers says. "Optimists can still recognize that terrible things happen and they can still mourn and fret and become angry over them. But they don't let the negativity consume them. They try to aim their attention on solutions and silver linings." While it can take a lot of work to become more optimistic, it's worth avoiding all the negativity below.

If you aren't high on anyone's list of people to call when they hear good news, take note. As Rogers says, "People might hoard their amazing experiences or opportunities from you out of fear that you'll rain on their parade." If they are totally right — you likely would find something negative to say — then it may be time to rethink your energy.

2. They Do Call To Gossip And Vent

If you are someone's first call, but only when they've had a bad day, that's also a sign. "On the flip side, if people pick up on your pessimistic energy, then they'll probably come to you when they feel like they need to be negative in order to move forward," Rogers says. Venting and negative energy tend to go hand-in-hand.

3. No One's Afraid To Ruin Your Day

If people swoop into your life with problems, you can revel in the fact they trust you and want your advice. But it's also a sign that they just don't respect your mood — since it always seems to be bad. "When they themselves are feeling negative, they know that coming to you wouldn't ruin your day or bring down your vibe," Rogers says. Whether that's true or not, it's not a healthy trend to encourage.

4. You Seem To Have Really Bad Luck

While sh*t happens to everyone, it seems to happen to you way more often. And when that's the case, it's likely you (as the common denominator) has something to do with it. As life coach Keren Eldad reiterates, "If you are experiencing negative emotion in high proportion to positive emotion — you are the source of negative energy."

5. You're Always Caught Up In Some Kind Of Drama

As certified counselor David Bennett says, "You're always involved in drama (even if you claim it's everyone else who is drawing you in), and you are always complaining, judging, or expressing outrage (in real life or on social media)." If a day can't go by without some sort of drama online or a fight with your partner, it may be that energy that's to blame.

6. You Have Ongoing Fights On Social Media

In the same vein, take it seriously if you can't seem to stay out of trouble online. "A lot of people think they are positive, but they need to ask themselves, 'What is the tone of what I am saying, doing, and posting on social media?'" asks Bennett. "Do you make others happy, relaxed, and laugh, or do you cause them to feel sad, angry, and outraged?"

7. People Seem To Walk On Eggshells Around You

If it seems like your friends and fam aren't relaxed around you, it may be they're walking on eggshells — expecting you to be horrible at any moment. "No one likes to deal with someone who could get upset over something innocuous," says spiritual counselor and psychic Davida Rappaport. If this is you, it may be due to your negativity.

8. They Physically Turn Away

Another sign that someone's uncomfortable in your pessimistic-y presence? They physically turn away when you're talking. "When conversing with people they may have their body turned away from you or they may have their arms crossed to show a lack of interest, or even putting up a barricade if they're not agreeing with what you're saying and how you're saying it," clinical counselor and movement therapist Erica Hornthal tells Bustle. It may not be intentional, but it's a natural reaction.

9. You Don't Have Any Super Close Friendships

Not everyone has to be the life of the party, or the most optimistic person on in the room. But that doesn't mean you don't want close friends, or that you're trying to push everyone away. As Hornthal says, "You might experience people not wanting to connect to you or passing you by all together." And that can really hurt.

Over the years, you've noticed a steep decline in how many people want to hang out. "If you are 'that person' who is known for your pessimism and negative attitude, people will start to avoid you," psychologist Dr. Nikki Martinez tells Bustle. "Friends want to be there for you, but everyone has their limits,"

As Martinez says above, friends can only take so much. So if you've lost friends, it may be your negative energy that's pushed them away. "No one wants to surround themselves with negativity, and you do not want to be the negativity they feel they need to avoid," she says. "During particular negative periods, I have seen people lose, partners, friends, and jobs, due to their overall disposition." And that's definitely not what you want.

If anything of this sounds familiar, don't feel bad. Not everyone is super sunny or optimistic. It is important, however, to pay attention to how your moods might be affecting other people — especially if it means saving your relationships.

More like this
3 Zodiac Signs Most Likely To Be The Center Of Attention
By Nina Kahn
These 4 Signs Are The Seductive Sirens Of The Zodiac
By Brittany Beringer
Think Your Partner Is Cheating? These Tarot Cards May Confirm Your Suspicions
By Kristine Fellizar
These 4 Signs Are The Sarcastic Jokesters Of The Zodiac
By Brittany Beringer
Get Even More From Bustle — Sign Up For The Newsletter