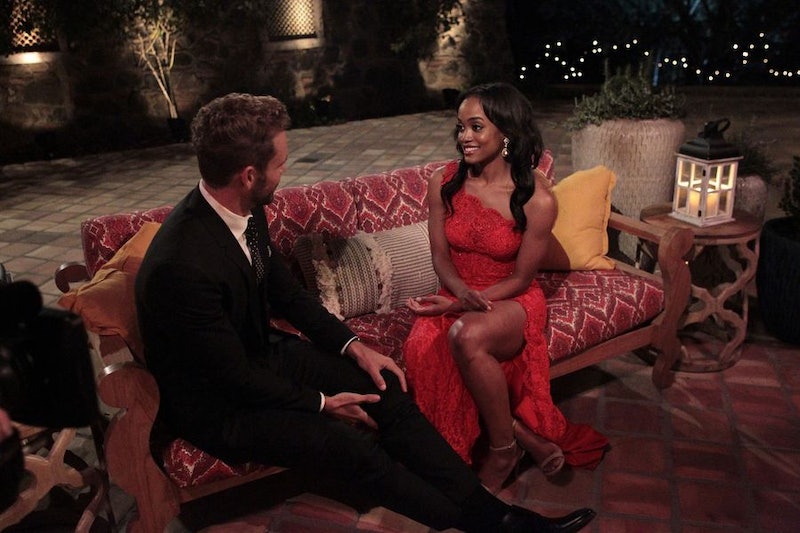 No matter what you think about Nick Viall's season of The Bachelor, there's no denying that it's ushering in a new era of the franchise. When I look back at what The Bachelor was like in the beginning, I realize just how much has changed in the last 15 years. But, a lot of that change came over the last few months, because Nick's Bachelor season had many firsts for the show.

From more serious milestones regarding topics of race and sexuality, to funnier firsts (like pretty much everything to do with Corinne), Nick will go down in history as a Bachelor for a new generation. And, sure, he isn't personally responsible for everything on this list, but he'll be forever known as the leading man during a season of some pretty welcome change. My hope is that the 21-season show (and the 13-season The Bachelorette) will only continue to grow and shift as our world does too. While I love the familiar premise and the characteristic drama, sometimes change can be good. And if these changes from Nick's season are any indication, future installments are going to be even more unpredictable and, of course, dramatic.

1. It Starred A Bachelor Who Was On The Bachelorette Twice and BiP

Nick proved that it doesn't matter how many times you've been on the show, or which iterations of the franchise. It doesn't even matter if you weren't on the most recent Bachelorette season. If you have fan appeal, you have a chance.

2. Corinne Became The First Contestant To Sleep Through A Rose Ceremony

She was just tired, OK?

When Nick asked about her last relationship, Jaimi casually mentioned that she had dated a woman. Nick (and the show, thank goodness) treated her reveal like the NBD it was.

4. Rachel Was The First Black Woman To Receive The First Impression Rose

5. Sex Was Discussed Without Shame

Yes, the show has mentioned sex before, but it usually always had negative connotations, like it did on Kaitlyn's season when she was slut-shamed by fans and her contestants for sleeping with Nick before the Fantasy Suites. Nick's season had a healthy view of sex, with Raven even bravely admitting she'd never had an orgasm but was eager to try with Nick. You can bet that was the first time that word was used on the show.

6. The Next Bachelorette Was Announced Before She Was Eliminated

7. Nick's Season Gave Way To The First Bachelorette Of Color

Speaking of that early announcement, Nick's contestant Rachel made it far enough in the competition (also a first) to be considered for the role of Bachelorette and then landed the title.

8. Rachel Will Also Be The Oldest Bachelorette

At 31, Rachel's season will be historic because she'll also be the oldest female lead in The Bachelorette's history. It's so exciting to see the series finally make these changes, all in one season.

9. A Contestant Who Knew The Bachelor IRL Joined The Show

Sure, former contestants have returned to the show for a shot at the new lead, but Liz wasn't a member of Bachelor Nation when she met Nick at Jade and Tanner's wedding and parlayed that into a slot on the show.

10. The Villain Made The Leap To Fan-Favorite

It took Courtney Robertson years to reverse fan opinion of her as a villain (she still hasn't convinced some people), and recent Bach villains Olivia and Chad still have a healthy amount of haters. Corinne managed to go from hated to loved during the course of the show.

"Not seeing color" isn't actually a good thing, so I was glad that Rachel, Nick, and Rachel's family all had a healthy discussion about the realities of dating in an interracial relationship.

Nick's season broke a lot of barriers, so I just hope that The Bachelor franchise will continue to do so in seasons to come — starting with Rachel's already historic turn as Bachelorette.

More like this
This 'Bachelor' Contestant Got Back With Her Bachelor Nation Boyfriend After Going Home
By Grace Wehniainen
Twitter Thinks This Is The Real Reason Zach Sent Christina Home On 'The Bachelor'
By Grace Wehniainen
A Guide To All Of Zach Shallcross' 'Bachelor' Filming Locations
By Brad Witter
Genevie Explained Why She Was Wearing A Sling During 'The Bachelor'
By Grace Wehniainen
Get Even More From Bustle — Sign Up For The Newsletter
From hair trends to relationship advice, our daily newsletter has everything you need to sound like a person who’s on TikTok, even if you aren’t.