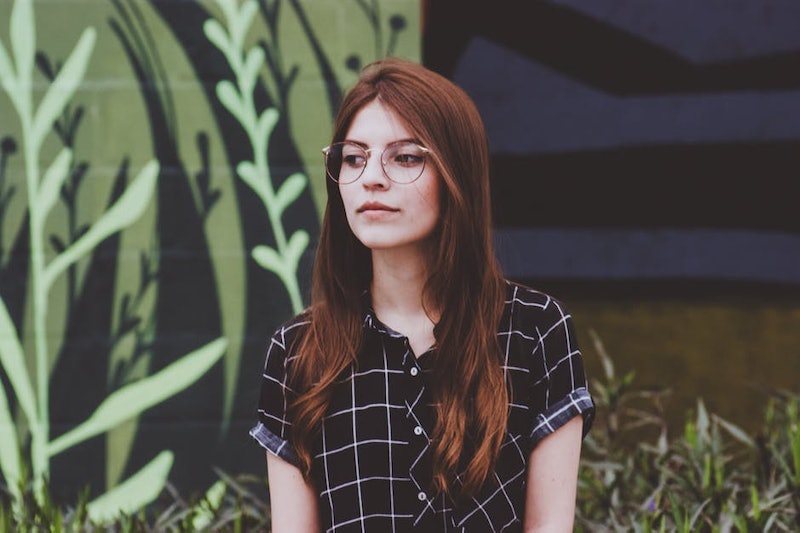 If you're like every other human on earth, you've probably snapped a few selfies, humble bragged about your life, or otherwise spent an hour or two talking about yourself. That's because each and every one of us is "narcissistic" to a degree. And you know what? That's completely OK.

In fact, it's why I put the word in quotations, because it's a strong one for these so-called selfish traits that are actually considered normal — if not somewhat healthy. "Many people have narcissistic tendencies, traits, etc. And 'a touch' of narcissism can even be an important factor in daring greatly and in going after risky situations," clinical psychologist Dr. Josh Klapow, host of The Web Radio Show, tells Bustle. "But there is a big difference between that and a full blown disorder."

Narcissistic traits, like the ones you'll see below, only become a sign of Narcissistic Personality Disorder (NPD) if you're exhibiting five or more of them, and if they've stuck around for a significant period of time, Klapow tells me. Only a doctor can diagnose the disorder, though, so it's important not to jump to conclusions about your own issues, or someone else's.

If you or someone you know is struggling with the traits listed below, and they've been pervasive, do reach out to a therapist for info on what to do next. He or she can help you better manage your emotions, and your relationships, so you can get on track to a healthier life.

1. You Have A Superiority Complex

If you honestly and truly believe you are better than everyone else, that could just be the result of how you were raised. Or, it could be a sign of NPD. As Klapow says, "Someone with NPD will believe they are superior and will act that way." The side effects of such a belief might show up in how people respond to you in relationships, as well as how you're treated at work.

2. You Fantasize About Ideal Levels Of Success, Beauty, And Love

Everyone wants to do well in life. But someone with NPD, as Klapow tells me, take it to the extreme. "They will believe that they can achieve the highest levels of any of these — success, beauty, love, etc. — and believe they are not limited by anything or anyone." That healthy dose of self-doubt just won't be there.

3. You Feel Extra Special And Unique

Of course everyone is unique, and everyone brings special talents and ideas to this world of ours. But someone with NPD might think they are special or better to an unhealthy degree. "And they'll believe that only jobs, social statuses, and individuals who have this similar level of status are able to understand them," Klapow says.

It feels good to be patted on the back and recognized for your achievements. But if you have this personality disorder, you might feel like people owe you the courtesy of their admiration and respect. "People with NPD feed on validation, reinforcement, and praise," Klapow says. "They need to see this and experience this on a regular basis."

5. You Think You Deserve Special Treatment

Speaking of others owing you things... people with NPD often feel like they are entitled to everything and everyone. As Klapow tells me, they also feel like they should be offered special treatment in a way that's more, or better, than what other people receive.

6. You Often Exploit Others For Personal Gain

Someone with NPD might not think twice when it comes to what other people need or want. And they're not above taking advantage of others in order to get ahead. "Their needs take priority and thus they are willing to risk and ruin relationships to feed their need," Klapow says. Often, this takes the form of exploiting others, and using them to reach your goals — without feeling any kind of regret.

7. You Aren't The Most Empathetic Person

In that same vein, someone with NPD might struggle to empathize with others. "They have a very hard time feeling or relating to others. They are so self-focused that they cannot connect when others are suffering," Klapow says.

This might show up in relationships, where your partners claims that you're selfish. Or where you lose friends on the regular, because you've thrown them under the bus.

8. You Really Struggle With Jealousy

Since people with NPD think they deserve the world, they often struggle with feelings of jealousy towards others who have more than they do. So if you're constantly green with intense feelings of envy, take note. But also keep an eye out for the flip side. "They have a great deal of jealousy," Klapow says. "But often turn it to believe that it is others that are jealous of them."

9. You Constantly Correct Others

While not a clinical symptom, per se, many people with NPD are in the habit of correcting others. And I'm not talking about the bad habit of occasionally pointing out someone's grammatical errors, though that would count.

The difference here, is motivation. "The constant correcting keeps the other person in a one-down position, feeling done-to and reaps no compassion or empathy," says Dr. Fran Walfish, a Beverly Hill family and relationship psychotherapist.

11. You Have Unreasonable Expectations

Another side effect of the above traits is the expectation that people will (and should) bend over backwards for you. "I experienced this with a client that would schedule an appointment and requested that I made a house call to her because she did not want to drive in traffic," says licensed counselor Amber Dee. "Narcissistic Personality Disorder is a personality that exhibits lack of empathy for others, need of constant admiration, and hugely inflated sense of self-importance."

Remember, if you have NPD, you're definitely not alone. There are things to do in order to become more self-aware, and manage these types of damaging thoughts. So if you recognize any of the traits above, or think you might be having issues in life as a result of them, it may be time to snag yourself a therapist.

More like this
The 19 Best Tweets & Memes About Bisexual Awareness Week
By Lexi Inks
5 Sneaky Signs That You're Dealing With Narcissistic Gaslighting
By Lexi Inks
These 4 Signs Are The Seductive Sirens Of The Zodiac
By Brittany Beringer
Think Your Partner Is Cheating? These Tarot Cards May Confirm Your Suspicions
By Kristine Fellizar
Get Even More From Bustle — Sign Up For The Newsletter