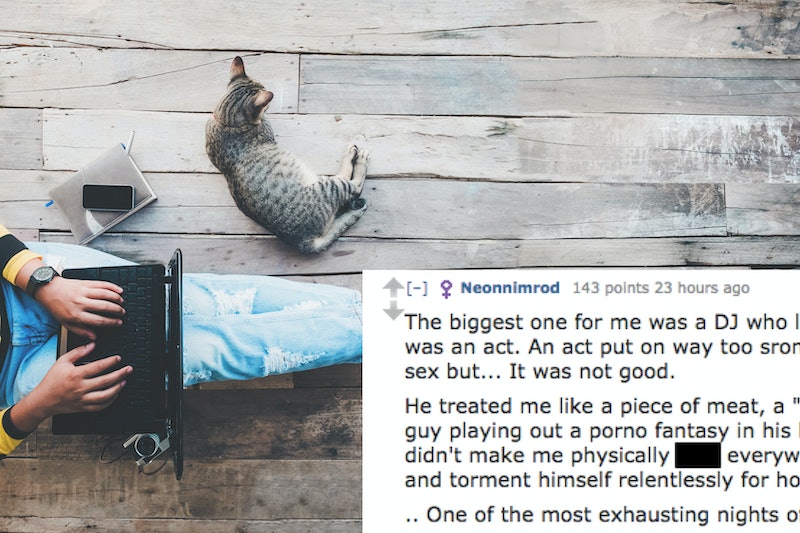 Last weekend, the internet exploded with the arrival of “Cat Person,” a short story written by Kristen Roupenian and published online at The New Yorker. The story has gone on inspired a huge discussion, a large part of which involves women sharing their own real-life “Cat Person” stories. As a recent thread on the r/AskWomen subreddit underlines, there’s a reason the short story resonated so strongly for so many people: We’ve all got our own “Cat Person” experiences, and they are all indicative of the larger issues with how our culture deals with gender and gender dynamics.

I am fortunate that my own “Cat Person” experiences have been mild, and mostly limited to interactions with people I’ve never met in person. On in particular, however, stands out: When I was in college — well over a decade ago, when I was young and naïve in the way that many students tend to be — I was just starting to dabble in online dating. I rarely went on any dates; I was busy enough that my schedule didn’t often allow it — and also, I was a little bit afraid (for a whole host of reasons, including my personal safety). But I figured, hey, this might be a good way to get better at talking with people and maybe even at flirting, even if it was just in a text-based medium.

The story will likely sound familiar. A guy messaged me, and we corresponded for a short while — but something felt… off to me. He came on incredibly strongly, ignoring any boundaries I attempted to set; it made me uncomfortable. I tried to do a slow fade and eventually stopped responding. He started calling me names. So, I blocked him and carried on with my life.

He tried again later on. He used a different screen name, but it was similar to the other one (which had been a unique moniker in the first place), and his profile photo was the same; clearly it was the same person. Indeed, in light of what would happen next, I wonder now if maybe he had been reported or blocked too many times and had been suspended from the site under his original name.

Based on our previous interactions, I knew that this time, I had no interest in even corresponding with him, let alone going on a date — so I wrote back, “Thanks, but I don’t think that’s a good idea.”

He responded with a wall of text full of capital letters and accusatory language: How could I say it wasn’t a good idea? I didn’t even KNOW him — he deserved a CHANCE, I just needed to give him a CHANCE, I was such a BITCH for not even giving him a CHANCE.

Every alarm bell I had went off, ringing in my head with a ferocity that frightened me almost as much as the message itself had. I immediately blocked him.

I don’t even know if he remembered having spoken to me before.

At the time, I didn’t know how common this kind of experience was. Now, though? Now I know that it happens all the time. And because of that, the ending is the part of “Cat Person” that resonated with me the most: The message exchange that began with, “Hope you’re doing well!” and ended with, “Whore.”

I know now that blocking that guy was the right move — that listening to the alarm bells going off in my head was the best thing I could have done.

But I also know that I’m lucky he didn’t retaliate in other ways.

And I know that this shouldn’t be considered lucky. But I know, too, that it is — because that’s the world that we currently live in.

It’s the world in which all of these stories from the r/AskWomen thread on real-life “Cat Person” experiences exist, as well. Here are 11 of them; head on over to Reddit for more.