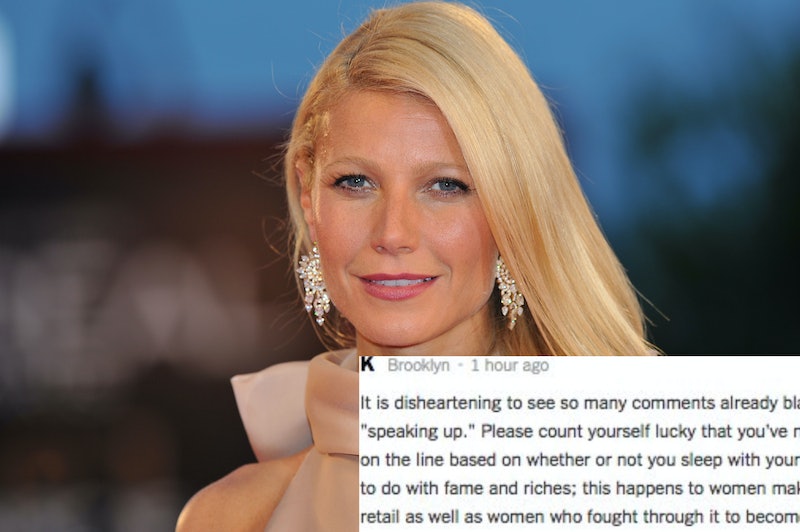 It is not surprising, but it is still upsetting: In the wake of the allegations against Harvey Weinstein, a huge number of women have stepped forward to say that they have allegedly been sexually harassed or assaulted by him… to which the general response has largely been, “Well, why didn’t you speak up sooner?” But one comment from a New York Times reader about why women don’t speak up about sexual harassment and assault gets to the heart of exactly why “Well, why didn’t you speak up sooner?” is the wrong question to be asking. This question is just another example of rape culture in action, a display of victim blaming that is no less insidious for its being nestled between statements of how "brave" the women coming forward are and how much they should be thanked for doing so. Yes, they are brave, and yes, they should be thanked — but they do not have to defend the culture that silenced them in the first place.

On Oct. 5, the New York Times published a report by Jodi Kantor and Megan Twohey alleging decades of sexual harassment suffered by women in Hollywood at the hands of Weinstein, who is widely regarded as one of the most powerful figures in the motion picture industry. According to attorney Lisa Bloom, who is advising Weinstein, he “denies many of the accusations as patently false”; additionally, Weinstein’s spokeswoman, Sallie Hofmeister, said according to the New York Times on Tuesday, “Any allegations of non-consensual sex are unequivocally denied by Mr. Weinstein.” In a statement provided to The Hollywood Reporter, attorney Charles Harder also said that Weinstein is preparing to sue the New York Times:

“The New York Times published today a story that is saturated with false and defamatory statements about Harvey Weinstein. It relies on mostly hearsay accounts and a faulty report, apparently stolen from an employee personnel file, which has been debunked by 9 different eyewitnesses. We sent the Times the facts and evidence, but they ignored it and rushed to publish. We are preparing the lawsuit now. All proceeds will be donated to women’s organizations.”

Previously, Weinstein had told the New York Times, “I appreciate the way I’ve behaved with colleagues in the past has caused a lot of pain, and I sincerely apologize for it. Though I’m trying to do better, I know I have a long way to go.”

Then, on Oct. 10, two pieces were published detailing the stories of many, many women who claim Weinstein had allegedly harassed, assaulted, or raped them: One in the New York Times by Jodi Kantor and Rachel Abrams, and one in The New Yorker by Ronan Farrow. They are harrowing examples of how our culture of silence — of how rape culture —prevents survivors from speaking up, and how it allows the perpetrators of harassment and assault to continue their predatory behaviors day after day, year after year, decade after decade.

And still, many of the comments left on the New York Times piece (The New Yorker does not have a comments section) follow a familiar refrain: These women are brave for coming forward, but why didn’t they do it sooner? This question, however, is more of the same: It’s rape culture in action as demonstrated through victim blaming.

But a commenter located in Brooklyn signing themself “K” did not let this go unremarked. “It is disheartening to see so many comments already blaming women for not ‘speaking up,’” wrote K. “Please count yourself lucky that you’ve never had your career on the line based on whether or not you sleep with your boss. It has nothing to do with fame and riches; this happens to women making minimum wage in retail as well as women who ought through it to become CEOS.”

Indeed, many of the women who shared their stories in both pieces directly addressed why they stayed silent for so long — both at the times of the alleged incidents, and as time went on. It almost seems as if those asking, “Why didn’t they say anything before?” didn’t really read the pieces.

Multiple women in The New Yorker piece spoke about how they were allegedly worried if they spoke up, that Weinstein would “ruin” them — many of them used that exact word: “Ruin.” Said one woman who would speak only anonymously, “I was in a vulnerable position and I needed my job. It just increases the shame and guilt.” And in the New York Times piece, French actress Judith Godrèche said that when she went to a female Miramax executive after allegedly fending off Weinstein, the executive allegedly told her, “This is Miramax. You can’t say anything” — so she didn’t. Gwyneth Paltrow said she worried after speaking up that she was going to be fired; she had just been cast in the title role in Emma, which later made her a star. Costume designer Dawn Dunning, who in the early 2000s was an aspiring actress, left acting entirely after her alleged incident with Weinstein.

Whether they were established or just starting out, all of these women faced real fear that speaking up would jeopardize their careers — their livelihoods: Either they would lose what they had fought hard to win, or they would be scuttled before they even began. In either case, there was an extreme power imbalance at play: Weinstein held all the power; there were often alleged threats that if any of the women stepped forward, Weinstein’s legal team would bury them — or at the very least, drag their names through the mud. Indeed, Mira Sorvino said to The New Yorker that she felt her refusal of Weinstein hurt her career. “There may have been other factors, but I definitely felt iced out and that my rejection of Harvey had something to do with it,” she said. And Ambra Battilana Gutierrez, who had a solid case against Weinstein according to police sources, found after she came forward that details about her past soon found their way into the tabloids.

Said Weinstein spokeswoman Sallie Hofmeister to the New York Times, “Mr. Weinstein has further confirmed that there were never any acts of retaliation against any women for refusing his advances.”

K addresses all of this in their comment — “Not only are these women made to feel humiliated and embarrassed, but in some cases if they had come forward, they not only would never work again, they also would be seen as whiners and ‘too sensitive,’” they wrote — but what they really nail is that this is not an isolated event. It is not just one man. It is not just one industry. According to multiple surveys, one in three women say they’ve experienced sexual harassment at work. This is an issue everywhere.

Our culture regularly makes it clear to survivors of harassment and assault that if you come forward about what you experienced, you have much more to lose than the person who assaulted you does — whether you’re a powerful person in at the top of your industry, whether you’re on the lowest rung of the socioeconomic ladder, or whether you’re anywhere in between. You might not be believed; you might be labeled as a troublemaker; you might be accused of, as K put it, “perpetuating” the behavior of your attacker; it might not be safe for you to come forward, in more ways than one.

“The amount of cognitive dissonance it must take to blame women for their own persecution is astounding,” wrote K — and they are absolutely right. And yet our culture keeps doing it.

The Weinstein allegations are rape culture writ large. But as K put it, “It is not the women's job to monitor men's behavior. We are doing the best we can with what we have to survive in a world that depends on our subjugation.”

So don’t ask why survivors of harassment or assault didn’t speak up sooner. Ask how our culture keeps allowing predatory behaviors to go on for so long — and what you can do to dismantle the systems that perpetuate it.