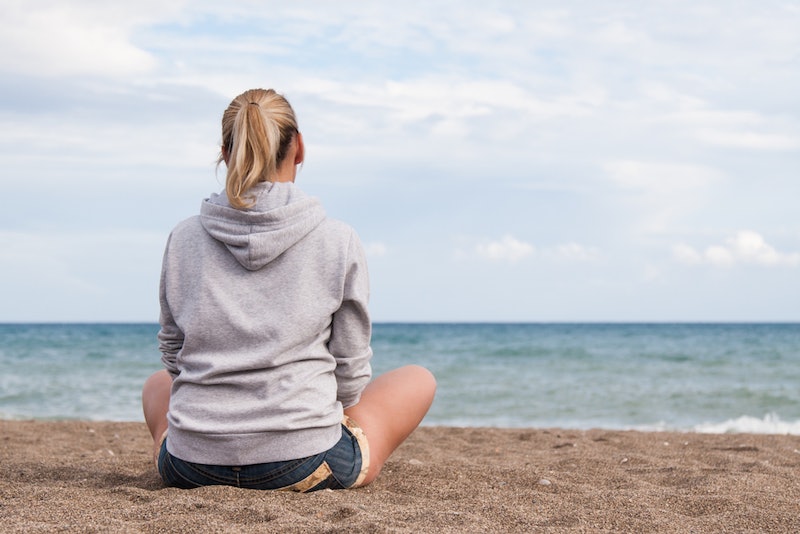 While not every charming person you meet will be a sociopath, if you feel like you're being manipulated, gaslighted, or otherwise messed with by an exceedingly lovely (read: cunning) person, it is possible you're becoming the victim of a sociopath's mind games. Or, at the very least, you're being strung along by someone with those tendencies. This can be an incredibly disorienting experience, whether it's happening in your relationship, at work, or in a friendship. So the more you know about sociopaths, and the faster you can get out of manipulative situations, the better.

But first, what, exactly, is a true sociopath? "A sociopath falls into the category of cluster-B personality disorders," therapist Rev. Sheri Heller, LCSW, tells Bustle, adding that they're similar to psychopaths, but tend to be less savvy and less polished — and thus easier to identify.

That doesn't mean, however, that they can't put you through the proverbial ringer. "Sociopaths are master manipulators and have a way of controlling others around them," NYC-based therapist Kimberly Hershenson, LMSW, tells Bustle. "The way you dress to who you associate with can all be influenced by a sociopath," without you even realizing it.

To help keep yourself out of toxic situations, here are some mind games sociopaths play, and other ways to spot them, according to experts.

1. They're A Little Too Charming

A classic trait of sociopaths it that they "use charm and manipulation in order to get what they want," board-certified psychiatrist Dr. Susan L. Edelman, tells Bustle. So if you're speaking to one, it might feel as if they're being a little too nice.

They have mastered the art of charming people to get their way. But one way to spot a lack of genuine kindness is to think about how it makes you feel. "At first, you may feel charmed," Dr. Edelman says, "while later you'll feel scared or confused."

It's important to trust your gut, especially when it comes to meeting new people. If someone is "too" charming or nice, you may want to learn a bit more about them, and take everything they say with a grain of salt.

Let's say you were to catch a sociopath in a lie. While most people would admit their wrongdoing and apologize, a true sociopath might go to great lengths to convince you you're wrong.

"Over time, you'll notice that this person is very comfortable lying to people and has little or no empathy for other's feelings," Dr. Edelman says. "They also don't show remorse when they hurt others as they have no conscience."

That's why, even if you call them out on their lie, or tell them how much the lie affected you, it won't necessarily stop them from telling a lie again. And they certainly won't truly care about the negative impact they had.

3. They Blame You For Everything

If you're being blamed for everything — for example, a partner always tells you arguments are 100 percent your fault — consider it a red flag. As Heller says, "If the sociopath is psychologically savvy, [they] may use psychological concepts to innocently pathologize the target and characterize [them] as the unintentional instigator."

In other words, when dealing with a sociopath, nothing will ever be their fault. They prefer to blame and manipulate others, instead of owning — or apologizing for — their mistakes.

4. They Try To Confuse You

One way sociopaths are able to manipulate others is by confusing them, and twisting words in their favor — all so they can get their way. For example, "a sociopath might say something, then insist he didn’t say it," therapist Karen R. Koenig, MEd, LCSW, tells Bustle.

As a partner, a sociopath might deny that they admitted a fear and accuse you of making it up, Koenig says. As a boss, they might claim credit for your successful work. As a coworker, they might spread a rumor about you and act shocked when it comes back around to them.

These are examples of a sociopath confusing those they interact with, as a form of manipulation.

5. They Seem To Enjoy Messing With Your Head

A sociopath will show no remorse while messing with your head — and they may even seem to enjoy doing so.

As an example, Koenig says they might insist you speak your mind to a friend, and then when your friend becomes offended, they'll act sympathetic and take your side and say how awfully the friend treated you. This is one way a sociopath's manipulative behavior may play out. But unfortunately, there are many others.

That's why it's so important to recognize signs you're dealing with a sociopath, so you don't get caught up in their games.

In a similar vein, if you feel like you can't "win" an argument with someone, no matter what you say or how reasonable you're being, it could be of sign of gaslighting — which is a tactic many sociopaths use in order to confuse their victims.

"Gaslighters manipulate your words then use them against you, so you end up saying, 'But I didn’t mean…' and keep trying to defend yourself," Koenig says. "The goal is to invalidate you and make you question your sanity."

This, again, puts them in a position of power, which is right where sociopaths like to be.

7. They're A Little Bit Threatening

In an effort to control you, a sociopath might even dish out a threat or two. "Sociopaths often use threats to keep you in their control, such as threats of suicide or saying 'you'll be sorry' for your behavior," Hershenson says.

They also might give off a threatening vibe because they aren't being genuine. It can be difficult to spot someone who's lying or manipulating those around them, and sometimes it's just all about their "vibe." If something feels negative, there's a good chance it is.

8. They Flatter You Endlessly

A sociopath will likely do whatever they can to win you over, and often that means dishing out compliments and flattering remarks. But if you know what to look for, you may be able to spot these compliments as disingenuous.

"Compliments feel good, but [a sociopath's] flattery feels like too much," Hershenson says. "Instead of saying they enjoy being with you, a sociopath might say, 'You are the most amazing person I've ever met and I can't imagine life without you,' even though you've only known them a short time."

Again, it's all about trusting your gut. If a person or situation seems too good to be true, they may not be someone you want to get too close to.

9. They Lie And Cheat

Casual and blatant, yet totally incessant lying is a huge sign of sociopathy, and especially so when the lies are helping the person reach an important goal.

"Someone who has sociopathic tendencies has a lack of remorse or regard for others," Dr. Joshua Klapow, clinical psychologist and host of The Web radio show, tells Bustle. "They are driven by what gets them towards a goal, and they are not going to play by the same rules of morality and 'right and wrong' as you are."

When it comes to sociopaths, they aren't going to follow usual codes of conduct, and might give off weird vibes as a result.

10. They Justify Breaking The Law

Because sociopaths (and even people with sociopathic tendencies) can only focus on themselves and their own needs, they rarely think twice before breaking the law. And in the process, they may even try to cover it up by manipulating your reaction.

"They will break rules and laws with strong justification and try to make you believe that if you can't see how it is OK, something is wrong with you," Dr. Klapow says. A sociopath will never admit that they did something wrong, or that they're flawed in any way. If breaking a law benefits them, that's all they'll focus on.

The tricky thing with sociopaths, is they're really good at lying, and thus really good at coming off as totally sincere when trying to get their way. Unfortunately, this can include using their talents to come off as genuine — even when they really aren't.

"They can be quite sophisticated in their approach," Dr. Klapow says. "You may feel they are being sincere and then turn around and find out they have manipulated your good will and trust. Lying, manipulation, and seduction to get you connected with them are all games the sociopath will play."

12. They Treat You Differently

"If they seem to be engaging you deeply and emotionally, but have a bad reputation with others, these are all warning signs," Dr. Klapow says. You might, for example, notice that someone is disliked at work, but for some reason they're super sweet to you.

"Keep your eyes open and focused not just on how they are treating you and what your interactions with them are like, but how do others see them," Dr. Klapow says. This can be a big clue, and it can help you see past their veneer.

When dealing with a sociopath, you might not be able to put your finger on what, exactly, is "off" about them. But that feeling, that gut instinct that something's wrong, will likely still be there.

"With a sociopath, that 'something is not right' feeling could be your first and only warning sign," Dr. Klapow says. "Trust it."

Because if something feels strange, and you think you're being lied to, manipulated, or gaslighted, that very well may be true. And when it comes to sociopaths, this is what they're skill at doing. Anyone can get caught up in a sociopath's toxicity, but being able to spot the signs can make it easier to keep yourself safe.

This article was originally published on Oct. 24, 2017