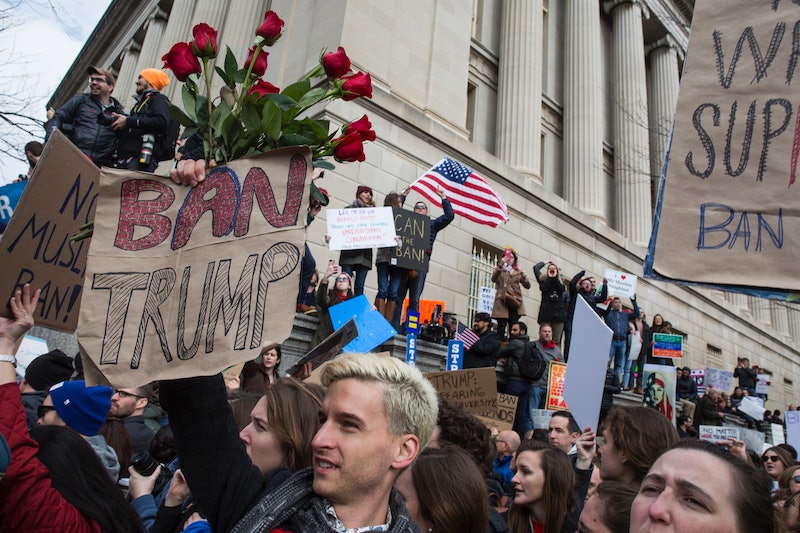 During the nine days Donald Trump has occupied the office of United States president, he has proposed damaging policies, and implemented dangerous executive orders, that threaten the foundation of American democracy. He also unleashed millions of passionate protestors, making himself the target of social media mockery in the form of anti-Trump protest memes that make it clear — that for millions of Americans — Trump is not their president.

I know you're feeling weary. Since Nov. 8 it seems like the United States has turned into one bad reality TV show that you can't turn off. In between protesting Trump's administration, writing letters to, and calling, your representatives, donating to organizations like Planned Parenthood, and the ACLU, you're exhausted. Remember to take time to decompress and take care of yourself — and remember to keep your sense of humor while you're fighting the good fight.

According to at the University of Denver Political Scientist Erica Chenoweth, who studies nonviolent resistance, “Humor plays an important role in framing the mood of a political action,” Chenoweth told Charley Locke in a Jan. 25 Wired article. “When campaigns are starting to build popular support, the more it looks like a big party, the better.”

To that end, anti-Trump protest memes are a good tool to keep in your activist arsenal. When you feel like giving up, or you just need to laugh, share a meme. Here's 13 of the best anti-Trump memes and signs trending right now on twitter.

I've read that a lot of people started their periods during or immediately after the Women's March. I know me and one of my friends synced our cycles at the march.

The Pen Is Mightier Than The Sword

A photo of Trump capping his pen with a look of concentration most people reserve for their morning poop has gone viral. Now there's an anime version, because it never stops being funny.

When People Tell You To Calm Down

This one is pretty self explanatory.

Many Trump voters are experiencing Trump-voter regret. Some people actually thought he wasn't serious about the things he vowed to do during his campaign. Yeah, and this used car for only $495 runs like a dream. Really it does. Trust me.

How To Keep Trump Out

Build your own wall to protect yourself from Trump!

Play With Your Food

If the events of the past nine days have made you lose your appetite, don't let your meal go to waste! You can make your own Trump out of cold cuts and a banana.

Think of it this way. Trump is Darth Vader. His wall is the Death Star. He is trying to revive the Empire. You are the Resistance. Any questions?

He Tried To Warn Us

“When someone shows you who they are, believe them the first time.” — Maya Angelou

Maybe We Should Have Stayed In 1985

The Biggest Crowd Ever

I'm telling you, this place is packed. The crowd is huge. I mean really bigly. You just can't see it because most of the people here are ghosts. Trust me.