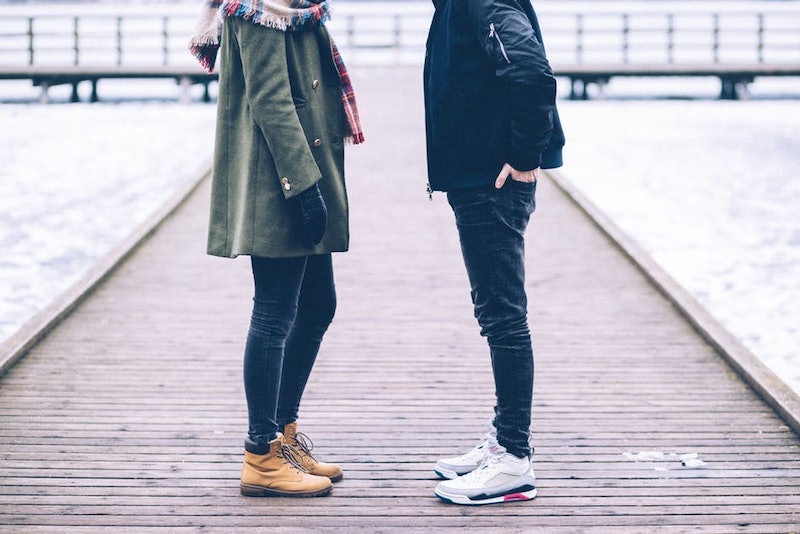 No one ever said relationships are easy 100 percent of the time. Joining the lives of two people is almost always an exercise in patience, trust, and honesty — which aren't traits that come easily to everyone. In fact, many of us engage in habits that can be damaging to our relationships, oftentimes without even knowing it.

Which is, of course, totally human. As long as you learn from your mistakes and make an effort to change, they aren't usually the end of the world. However, if you make relationship mistakes on the regular (think lying, cheating, keeping secrets) and make zero effort to clean up your ways, you can reasonably expect the whole thing to go up in smoke.

In order to have a healthy thing going on, you'll both need to make an effort to avoid sh*tty relationship pitfalls. "Nobody enjoys discussing hurt feelings, awkward financial topics, future mother-in-laws, or anything else that might bring on that squirm in your chest. But healthy relationships understand that it's not an option — it's a requirement," says life coach Kali Rogers, founder of Blush Online Life Coaching. "If relationships are going to stand the test of time, they need to leave the door open to almost every conversation imaginable ... This requires a deep sense of trust, so work on building that early and often in order to reach this level of openness." And, while you're at it, read on for some habits you should definitely avoid.

1. Bottling Up Your Feelings

One of the most important aspects of any relationship is healthy and open communication, so try not to bottle up your feelings. "It's not fair to you and it's definitely not fair to them," says Rogers. "Feelings, while sometimes illogical, are always valid." Sharing them with your partner is key.

2. Trying To Be A Mind Reader

While you know each other well, don't assume you can read each other's minds. "This gets more people into trouble than I can even count," Rogers says. "You will always have the responsibility to ask for what you want no matter how long you have been together ... Spell it out for [each other] every single time and you won't feel constant disappointment."

3. Never Talking About The Future

4. Telling All Sorts Of White Lies

Grand, sweeping lies are obviously damaging to a relationship. But little white lies aren't so great, either. "It may seem harmless to tell a little white lie or two on occasion, but it is important not to make a habit of it," Daniels says. "Lies are like wildfire ... One harmless lie could build into multiple lies and spiral into a web of deception if you are not careful."

Barring the occasional slip up during a heated argument, you should never call your partner names. "When a partner does this, the other partner either shuts down or gets defensive and communication about the problem is stopped," sex and relationship therapist Jeanette Tolson, LCSW, CASAC tells Bustle. "The complaining partner doesn't feel heard and the other partner feels hurt." And that does not a successful relationship make.

6. Shutting Your Partner Out

Otherwise known as "stonewalling," shutting your partner out when you're feeling upset isn't a good idea. "It's easy to get your feelings hurt and shut off emotionally, but that is the kiss of death in a lot of relationships," Rogers says. "Punishing your partner for having feelings by not speaking at all is one of the worst things you can do in a relationship."

It's possible to ruin trust in many ways, as with lying and name calling. But we all know the ultimate betrayal of trust has to do with being unfaithful — either physically or emotionally. "This destroys trust and take a lot of work to rebuild," says licensed marriage and family therapist Christene Lozano says. So just don't do it.

8. Letting Them Down Constantly

Again, there are plenty of ways you can betray your partner that don't involve cheating. One of the biggest, as Lozano tells me, is by being consistently unreliable and not following through with your commitments. Do you let your partner down in big ways every day? If so, it may be time to reevaluate things.

9. Placing Blame Instead Of Owning Your Mistakes

After an argument, it can be tempting to place blame on your partner. And yet, as Lozano tells me, this habit can be pretty darn damaging to your relationship. It's much healthier to own your mistakes and talk about solutions together, instead of pointing fingers.

10. Faking Your Way Through Sex

While it's OK to fake it occasionally for the sake of your partner, you shouldn't let yourself get too caught up in this habit. "Desire can be a key factor in building closeness in relationships," sexologist and marriage and family therapist Dr. Lexx Brown-James tells Bustle. If you aren't feeling satisfied, say something. "If there is a turn off that is happening, there are gentle reframes and encouragement you can give your partner."

Ah, money. It's difficult to talk about, tricky to share, and can start many an argument. So get ready to be as open as possible with all things cash-related. "If you lie about the amount of money you spend or your personal debt, this can be a problem," says intuitive Davida Rappaport. It's much better to sit down with your SO and be honest about savings, splitting bills — things like that. It'll save you all sorts of problems down the road.

12. Trying To Change Them

We all have things we don't like about our partners. But if you sign up to be with someone, you gotta go into it loving them just as they are. As Rappaport tells me, trying to change them — or expecting them to change — just isn't fair.

13. Picking On Them Or Criticizing

Again, we all have things we don't like about our partners. It can be tempting to let them know in the form of criticism, or a biting remark. But we all know that never helps anything. "One of the worst things you can do in a relationship is to criticize your partner, talk about their character flaws, or blame problems in the relationship on your partner's character defects," says licensed marriage and family therapist Rebecca Williams, LMFT. This habit will not only hurt their feelings, but it'll make them defensive which never helps anything.

If you recognize yourself (or your partner) in any of these bad habits, start making an effort to change. While it may not be easy own your mistakes or start being honest, these things will definitely help your relationship.

More like this
The Best Time To Date After A Breakup, According To Experts
By Bustle Editors
The 4 Most Forgiving Zodiac Signs
By Kristine Fellizar
25 Things I've Reduced My Life To, In Addition To WFH In My PJs
By Ginny Hogan
Why Experts Say Sleeping With A Fan On Isn’t Totally Risk-Free
By Sophie McEvoy
Get Even More From Bustle — Sign Up For The Newsletter