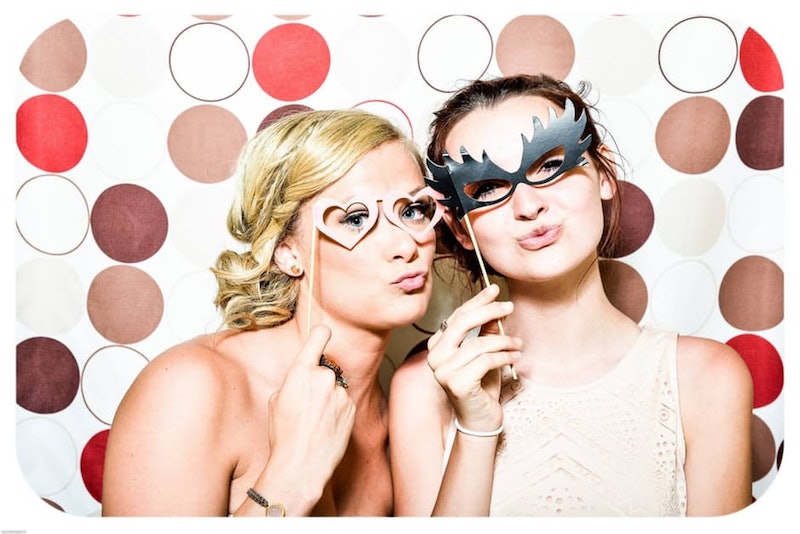 I've been to many a party that focused on beer pong, and many (more recently) that centered around a snack table. While these themes are fine — and very enjoyable — it's always exciting to throw a get together that's a little less predictable. And one of the best ways to do this? By trying out some old-fashioned party games, of course.

Classic games not only bring on the nostalgia, but they pretty much guarantee a good time. I mean, have you ever played a rousing round of "cake quilt"? And when was the last time you dusted off your Twister mat or Quiji board? If it's been a while, it may be time to bring 'em back.

Apart from being fun and unique, an old school party game will give your guests something to focus on. While it's always nice to sit around and chat quietly, an activity can be the perfect ice breaker — especially if your guests need a little somethin' somethin' to get things going.

As David Jacobson, founder of the entertainment production company TrivWorks says, "Party games work perfectly as ice breakers because they get people working/playing together in a fun and structured way, which allows them to get to know one another while having a blast." Sounds good, right? Then read on for a few old-fashioned party game ideas to try at your next shindig. (And yes, you should definitely refer to it as a "shindig.")

Do you have a friend who can read tarot or oracle cards? If so, invite them over ASAP. Having your cards read is absolutely fascinating, as well as a great "party trick" to get people talking. Plus, tarot card reading is currently experiencing a resurgence, according to Maureen O'Connor in New York magazine, so go ahead and get yourself a deck, too. It may very well become your new hobby, as well as a great reason to invite people over.

Spoons "is a fast-paced game of matching and occasional bluffing," according to an article on Ranker.com. All you need is a deck of cards, some kitchen spoons, and up to 13 friends. As far as card games go this is one of the easiest, making it the perfect thing to play whilst snacking and drinking.

Mad Libs, a template word game invented in the 1950s, is definitely something you should play at your next get together. "Mad Libs are so much fun for guests these days," party planner Brandi Hamerstone tells Bustle. "I have clients who are printing out old articles or advice columns from the 50s/60s ... and then having some of the adjectives/verbs blocked out. Guests love hearing what the actual answers are and how dated they now seem to people." So cute, right?

Everyone's heard of charades — the acting game popularized in France in the 19th century — but when was the last time you actually played? It's a fun, easy game that can get loads of people involved without any need for props. (Since, you know, that's kind of the point.)

Ouiji boards were first introduced in 1890 as a parlor game. It quickly creeped people out — what with its connection to spiritualism and the occult — but that became a big part of the draw. If you want to play today, light some candles and really get into it.

Board games are where it's at if you want guests to feel comfy and have a good time. And Pictionary is the perfect example. As Jacobson says, "... it forces people to be creative, spontaneous, and there's a healthy competitive edge to it, which keeps the party raucous." Sounds perfect to me!

Traditional masquerade balls were a big deal during the Renaissance. They centered around the classic masks, fancy dancing, and a rousing game of trying to guess who was who. For a modern-day version, invite your friends over to paint and decorate their own masks and then have yourself a ball. (Or just sit around lookin' fancy and have a few drinks.)

If you're a fan of baking, then a cake quilt is probably going to be your new favorite party game. To "play," simply bake a plain sheet cake and give each guest a slice. Offer them a collection of items to decorate (icing, sprinkles, fruit, etc.) "When they have finished, put all of the cake squares back together and see what a beautiful quilt they've made," noted an article on Beau-Coup.com. So Instagram-able.

As someone who loved playing water tag as a kid in the 90s, I'm all about bringing this back. Imagine all your friends running around someone's yard with water guns. Yea, it's pretty much the perfect summer party game.

If it's been a hot minute since you played Twister, it may be time to dig it out of your closet (or your parents' attic). The game first became popular in the 1960s, but millennials probably fondly remember playing it at birthday parties in the 90s. As adults, it's the perfect ice breaker for guests who don't know each other well, but would like to see that change. (Wink wink.)

If you're in need of a new drinking game, give Up Jenkins a try. "One team open-hand slaps their palms down on a table, and one player is smuggling a quarter under one hand," says Myles Nye, owner of the company Wise Guy Events. "The other team uses the sound of the quarter, plus bluffing and facial cues, to figure out who's hiding the quarter." If you lose, you drink.

Remember those awesome "goodie" or "loot" bags you got at the end of a party as a kid? I say we bring those back, too. Before your guests leave, hook them up with a little bag of candy, a small candle, or some kind of themed trinkets. I promise they'll positively love it.

Whether it's a classic game of Twister, or something a bit older like Up Jenkins, throwing a party centered around old school games is the perfect way to guarantee everyone has a good time.