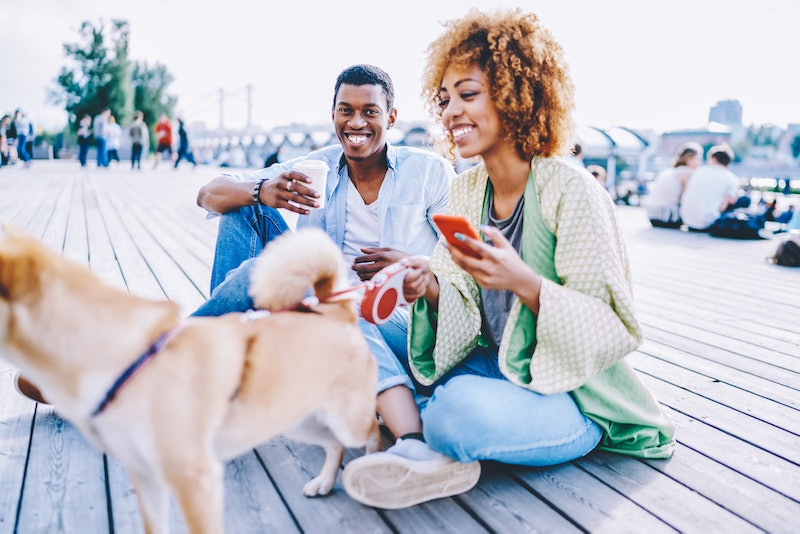 Up until now, you've felt like everything was going great in your relationship. You've been having fun with your partner, successfully dealing with problems, and living that couple life. But now things seem a bit off, and you can't shake the feeling that your partner is unhappy.

Whether it snuck up on you over the course of a few years, or it dawned on you suddenly one night, it's great that you noticed. Not everyone picks up on problems in their relationship, or takes the time to assess the situation. Even your partner might not realize they're projecting negative vibes, or that they're unhappy. So consider it a step in the right direction that you've realized something's wrong.

That's step one. Step two is actually doing something about it, before you worry for one more second — and before things get worse. "Use these signs as an invitation to have a conversation," Kali Rogers, author and life coach, tells Bustle. "Asking questions about the behavior, 'Are you stressed? Can I help?' or asking for what we want, [such as] 'I'd like to hold hands more,' is a better use of your time."

It may feel awkward, but it's important to open these lines of communication so you can figure out how to handle this, together. Here are some more signs your partner is unhappy, according to experts, as well as what to do about it.

1. They Aren't The Least Bit Accommodating

If your partner can't meet you halfway during an argument, or when making joint decisions, take note. "Relationships involve compromise," Kimberly Hershenson, LMSW, a NYC-based therapist, tells Bustle. "You do things you don't necessarily want to do for someone because you care and want to see them happy."

An unhappy parter, on the other hand, simply won't be able to muster the energy. So if you've noticed that they don't seem to care anymore, ask why. This may be the start of an important and ongoing conversation about your relationship overall, and how you can both be happier.

2. They're Always Out With Friends

While it's healthy to spend time apart and see your own friends, "if your partner always seems to have other plans and doesn't include you, it's a red flag that they aren't happy," Hershenson says. Many times, this can be a sign they have something on their mind, but would rather avoid addressing the issue.

If it keeps happening, speak up. You might find that your partner has other reasons for going out, such as simply needing a little space, and that's OK. But you won't know until you chat about it.

A happy partner will be down to talk about their day, and will be an open book when it comes to sharing their problems. That's why it's not a great sign if your SO is suddenly all clammed up.

"If you ask your partner how they are doing and the answer is 'fine,' this may show they are unhappy in the relationship," Hershenson says. "Not wanting to communicate and lack of communication are not good."

Of course, it's always fine to keep things to yourself in a relationship, or to feel a bit quiet some days. But it shouldn't be a habit that sticks around for long.

If your partner isn't feelin' too physical right now, it's important to respect their space. But since it can hurt if they shrink away from physical touch — especially since this is often a sign of underlying problems — you need to bring it up.

5. Your Convos Feel Awkward And Stilted

If your partner is harboring some form of unhappiness, it might feel like pulling teeth whenever you try to get them to chat. And this can be most obvious when talking about mundane things. "Saying things like 'it's cold outside' doesn't require a response, but most couples respond regardless because they simply enjoy talking to each other," Rogers says.

As the well-known relationship coach John Gottman has said, these moments are what's known as bids. "One [person] is bidding for affection, support, and understanding from the other," Rogers says. "If the other accepts, bonding is initiated. If they don't, it's a missed opportunity. Happy couples take advantage of bids as often as possible. Unhappy couples tend to not."

6. They Require An Inordinate Amount Of Alone Time

Again, alone time is key to a healthy relationship. You both should be able to be alone, leave each other alone, and feel comfortable going solo for awhile, as doing so shows trust in your relationship. And, it gives you fun things to talk about once you're reunited.

That said, your partner shouldn't want to be alone 24/7. "If you've noticed more individual activities replacing joint ones, that could be a sign of a partner trying to retreat," Rogers says. "They might need time to think or have decided that they need to build up their own identity and independence outside of the relationship."

On the one hand, the fact they're working on themselves can be a good thing. But it may also be their way of prepping for a breakup.

7. They've Been Picking Fights For No Reason

If your partner is suddenly argumentative, it might be due to excessive stress at work, or a side effect of depression or anxiety. So if they've been on edge, you'll definitely want to weigh all the possibilities, and try to help them through.

But since it could also be due to their unhappiness, it's not a trend you'll want to ignore. "When a partner is unhappy and can’t find a way out of the relationship, they will turn to creating a problem that isn’t there," relationship expert Lori Bizzoco, tells Bustle. "Your partner may try picking fights over little things and making a big deal out of them."

Suddenly, it feels as if you can't do anything right, or that you're in a perpetual argument. It can help to point it out, and ask what the real issue is. If it's a fixable problem, talking about it may be a big help.

8. They're Not As Excited To See You

It's normal for the intense of excitement of a new relationship to wane over time. You will still be happy to see each other, but not have intense butterflies all the time,and that's OK.

Do take note, though, if your partner seems apathetic towards you on a regular basis. As Bizzoco says, "It [might] seem as if getting to see you or be with you has little importance to them." You might also notice a little less excitement in their eyes, and it can hurt. So be sure to speak up.

9. They Suddenly Have New Hobbies

OK, so nine times out of ten your partner won't be picking up new hobbies because they're unhappy. They can certainly have side projects, and to do things alone, and still remain equally invested in the relationship.

You might worry, however, if it starts to seems like they're using these hobbies as a way of escaping the relationship, especially if it's a hobby they don't even allow you to join in on. Or if it's bringing them joy, but nothing you say or do gets the same response. "If they are not finding happiness in your relationship, they will try finding it in other aspects of their life," Bizzoco says. And that's not OK.

10. They Take Forever To Text Back

While it's impossible to sustain the 24/7 texting spree that was the early part of your relationship, you might want to say something if your partner currently refuses to text back. Or if they don't seem to prioritize communicating with you, even if you've asked them to make a few changes.

"It’s easier to recognize distance with your partner through texting," Bizzoco says. "They may take longer to respond to your messages or suddenly become busy and don’t have time to talk." Not only will an unhappy person not bother to check their phone, but they may even avoid doing it on purpose.

11. They're No Longer Talking About The Future

If you two couldn't stop talking about the future, it's worth noting a sudden silence. "If your partner avoids any discussions about the future and plans you both may have made, this is a sign that they may not be happy in the relationship," Davida Rappaport, relationship expert and spiritual counselors, tells Bustle. "Unless they are willing to discuss future plans, this may mean their future plans may not include you." And that's obviously something you need to know.

12. You've Been Feeling A Tad Suspicious

It's not uncommon for unhappy folks to seek attention outside their relationship, Rappaport says, instead of discussing problems within their partner, and finding ways to reconnected. Your partner might feel like it's easier to reach out to others for emotional support, and may even start an emotional affair in the process.

So trust your gut if things don't feel right. If you consistently don't know where your partner is, or if they've been throwing off untrustworthy vibes, you need to have that chat.

13. They're No Longer Making An Effort

When someone's no longer taking their relationship seriously, they're be likely to drop all the responsibility that comes with it. So no, you're not crazy for worrying about your partner's sudden lack of accountability.

"If your partner starts breaking promises or does not keep their word and does not seem to offer you more than a simple, 'I’m sorry,' this is a sign that they may not be happy in your relationship because they stop caring about how you feel," Rappoport says.

Which leas to this final bit of hopeful advice: just because you notice these signs, it does not mean your relationship is doomed. "It just means that there is something going on that is either a) not tied to the relationship, but the stress is spilling over into it or b) something is wrong within the relationship that needs addressing in order to be fixed," Rogers says.

If you two can have that heart-to-heart, it is possible to reignite that happiness, and stay together.

More like this
5 Signs You Have A Toxic Relationship With Yourself
By Lexi Inks
23 Super Sweet Things To Write In A Valentine's Day Card
By Karen Belz and Lexi Inks
Here’s What TikTok's "Mascara” Trend Is *Really* About
By El Hunt
The 3 Zodiac Signs Most Likely To Get Married Later In Life
By Kristine Fellizar
Get Even More From Bustle — Sign Up For The Newsletter
From hair trends to relationship advice, our daily newsletter has everything you need to sound like a person who’s on TikTok, even if you aren’t.