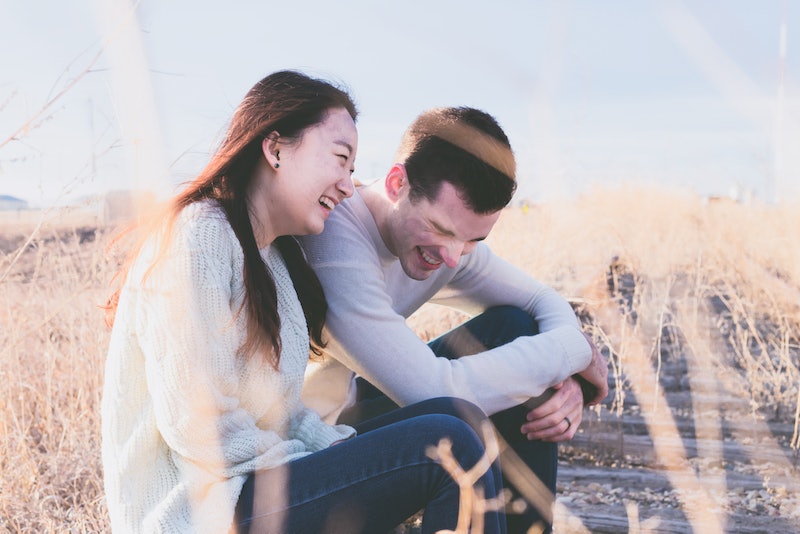 If you date men and have had many a immature relationship in the past, you might be wondering if you're finally dating a mature man. You know, a real grown up who can take care of himself, be there for you, and fully commit to a relationship with his sexy, grown ass self.

It's important to know if you've got the real deal, because love has a way of blinding us from the truth. If you're like most people, then I bet you've had your fair share of immature relationships. Your old flings probably seemed great in the moment (so cute! so fun!). But once things cooled off, or you got out of the relationship, it was suddenly clear how unhealthy it all was. Your ex was probably selfish, unsupportive, and really bad at arguing.

So, this time around, keep an eye out for the signs you're dating someone a tad more mature. Then, sit back and relish the healthiness of your relationship. "Having emotional maturity allows a couple to have direct communication ... work together as a solid, production team ... and strengthen their bonds of love," says Yvonne Thomas, Ph.D., a Los Angeles-based psychologist. Doesn't that sound so much better? Read on for some signs you've found yourself a good one.

1. His Apartment Isn't The Grossest Place You've Ever Seen

Whenever you stop by his place, it's hard not to notice how great it looks. There's a decided lack of dishes in the sink, and it always looks freshly vacuumed. It feels good to be there because it's clean. But, as ThreeDayRule matchmaking expert Hannah Hagan tells me, it feels even better because it's a sign of his own self respect.

2. He Has Solid Long-Term Goals

Whenever talk of the future comes up, it's clear he's thought all about it. He might have a five year plan, or goals to switch things up in his career. As Hagan tells me, this ability to see the bigger picture sets him apart from his less mature counterparts. And it's refreshing AF.

3. He Handles Himself Well In A Crisis

When sh*t hits the fan, you brace for him to bail or freak out. And yet, he never does. In fact, he sticks by your side through it all, and even does whatever he can to help you feel better. As Thomas tells me, this is a sign of a true adult.

4. He Has Emotional Intelligence Like You've Never Seen Before

As far as his emotions go, your man seems to be pretty tuned in. As ThreeDayRule matchmaker Nikki Hurst tells me, he's capable of having deep and sometimes vulnerable conversations. He shares his feelings. And when you guys argue, he never lets the fight take a nasty turn.

5. He Pays Attention To You In The Best Way

There's never been a day when you felt "ignored" or brushed off. "He notices your presence wherever you are and you both are completely aware of your ‘love language,'" Hurst says. "He knows how you like to receive affection and how affection is best received by him." Whether it's a hug, or a little hand squeeze, he's always ready to dish it out.

6. He's Willing To Go Outside His Comfort Zone

Let's say you really want to go on a hike, or spend the weekend camping in the woods. Is your city-dwelling man down to give it a try? If so, it's a really good sign. "Grown men are open to trying something new with you, or doing something out of their comfort zone," Hurst says.

7. He's Always Trying To Better Himself

Whether he stays up all night practicing guitar, or can't seem to put down that book, it seems your boyfriend is always practicing or learning something. As men's image consultant Patrick Kenger says, "A mature man is always in the pursuit of knowledge and continued education."

8. He Wants You To Be A Better Person, Too

While he's fully aware of how great you already are, your partner encourages you to be even better. Whether it's supporting your desire to go to grad school, or pursuing that weird new hobby, he is all about it. "He will go out of his way to boost you up, motivating and pushing you be the best version of yourself," says ThreeDayRule matchmaker Caitlin Bergstein. So cute.

9. He Celebrates Your Successes

Instead of feeling threatened by your successes, he celebrates them, Bergstein says. After you get accepted to grad school, for instance, he takes you out to dinner and plots what you're next move will be as a couple. As a result, you always feel supported — no matter what changes lie ahead.

It doesn't matter if you're out to dinner, or just lying around the house — your boyfriend always seems fully present. "When he’s with you, he’s truly there with you," Bergstein says. Not, you know, on his phone or staring off into space.

11. When Something's Bothering Him, He Says So

Instead of stewing in a bad mood, or keeping something to himself, he always speaks up. As Thomas tells me, this prevents him from holding a grudge or forming resentment. And you so appreciate that.

12. He Can Argue Without Losing His Temper

When it comes to fighting, your boyfriend always handles himself like a pro. "He can communicate in ways that are age-appropriate and respectful of you," Thomas says. "He doesn't have meltdowns or 'temper tantrums' in which he is yelling, screaming, pouting, engaging in silent treatment, or acting out." Things get resolved, and you always leave the disagreement feeling good.

13. He Always Asks About Your Day

While an immature guy might not look up when you get home from work, a mature dude will drop everything to ask about your day. And, he'll actually listen while you talk. As relationship therapist Rhonda Milrad, LCSW, says, "You [won't] just get one 'good luck' or an 'I’m sorry about that.'" You'll get an invested conversation from someone who truly cares.

14. He Finds Little Ways To Make Your Life Easier

Whether it's making soup when you're sick, or taking out the trash when you aren't looking, he's constantly trying to make your life easier. Sure, it's clear he wants to help. But this also comes from the simple desire to make you happier, Bergstein tells me. So sweet.

15. You Feel Like You Both Contribute Equally To The Relationship

In past relationships, you always felt like you cared more, did more, and gave more. But now, you feel like things are much more 50/50. As Thomas tells me, your partner doesn't call all the shots and he's not too dependent. Everything feels equal, you both have a voice, and it's clear you're both on the same team.

If any of these signs sound familiar, it's very likely you're dating a bonafide adult.