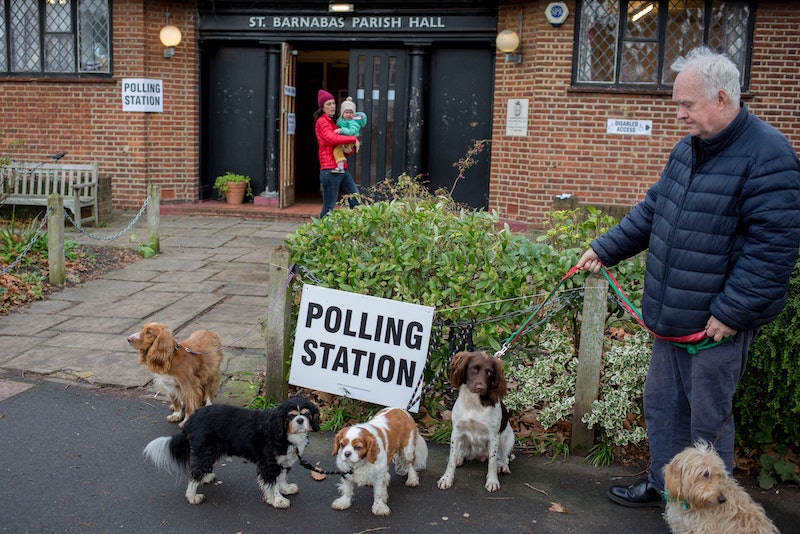 It's fair to say that history, especially in recent years, has proven that politicians often act like animals. Sadly, however, not the kinds people like to keep as pets. These photos of dogs at polling stations, where they're behaving like good boys and girls, proves what many of us have long known: dogs are superior creatures in comparison to even the finest among us.

During stressful and tense times, it's important to look to dogs. Dogs are chill and happy, excited about the simple things, ever hopeful. Steering clear of election coverage is pretty tough work. Or finding any that's on the light hearted style is, in essence, impossible. As tempers and passions flare, take some comfort in the fact that one cute thing trending is dogs accompanying their owners to the polling stations. Yes, many owners are making voting a part of their daily constitutional. Or as little Fido knows it, walkies.

Doggies don't care if leave means leave. They aren't fooled by messy hairstyles nor do they judge them. Those little beasts are no BS. If they don't like you, you know about it. If they love you, they'll lick your face and maybe even try and hump your leg. OK maybe I don't want a dog for Prime Minister.

Patience Is A Virtue

Dogs Of All Abilities Are Voting

For Some, It's A Fashion Parade

Or Even A Social Event

Some Are More Serious

Bearded Hipsters Are Out In Force

This Guy Thinks It's All A Laugh

We Also Shouldn't Forget It's Christmas

This Is A Pupper Who Would Love To Vote

Considering British Weather In December, Waterproofs Are A Must

Some dogs stunted like they were on the 'Gram

This Dog Has Come With A Beautiful Barnet

This Babe Put Curlers In For The Big Day

These Folk Want A Change For The Little Guys

Waiting For Democracy To Do Its Thing Can Be Boring

Or Taking A Chance To Show Unusual Nose Licking Skills

Even Those Too Young To Vote Are Chiming In

This One Is Concerned About Their Owner Getting A Chill

Politics Is Knackering Though

Ticked Off They Parked In The Wrong Place