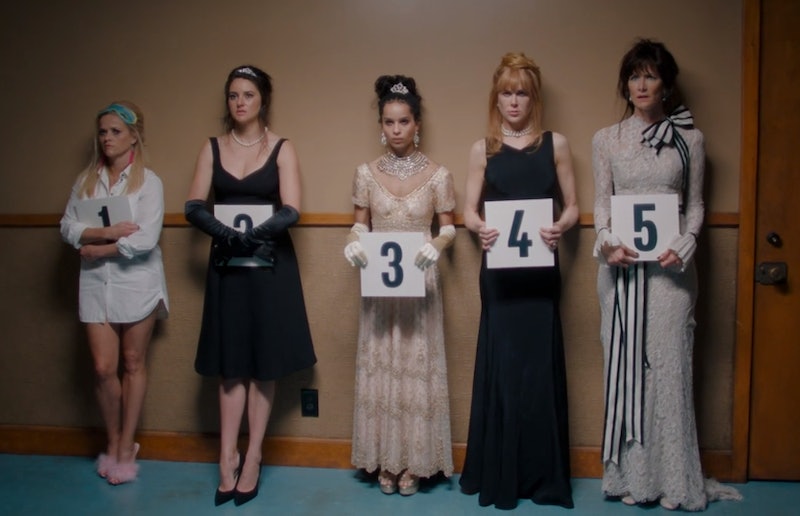 Big Little Lies is one of those shows that just offers perfect Halloween costume inspiration. Not just the Audrey Hepburn-inspired outfits each of the women wear on the night Perry is killed — though, get a group of your friends together to each wear one of those ensembles and you have a killer group Big Little Lies Halloween costume — the entire series is packed with looks that are memorable enough for great costumes that won't leave people asking you "what are you dressed as?" all night at every party you attend.

Even better is the fact that very few of the outfits from Big Little Lies require anything too difficult to get your paws on. If you have a sweater set and a coat, you're basically set.

Three out of the four costume options below are actually parent/child (ish) duos — which isn't surprising, considering the season's heavy emphasis on parent/child relationships and the role that mother's play in their children's lives specifically. But no matter which you choose, you and your bestie will have a fun time recreating the beachside drama of Big Little Lies.

Here are four iconic costume ideas from the show to inspire you.

The Monterey Five On The Night Of The Crime

The Monterey Five in their Audrey Hepburn looks make for a perfect BFF costume, so take your pick — just don't forget to print out a sign showing your number for questioning, a la the above photo. A plus? If someone hasn't seen the show, they'll literally just think you're Audrey Hepburn holding a number for some reason. Win win.

Meryl Streep playing Perry's mother swept through Season 2 of BLL like a hurricane, and Nicole Kidman as Celeste fully slayed. If you and your bestie want to pull off some weird, strained, messy, in laws-turned-frenemy-turned-enemy vibes this Halloween, Celeste and Mary Louise Wright are the perfect duo. Grab some of the items below to recreate the character's iconic looks. If you're going the route of Perry's mother, head to your local thrift store for a plethora of ill-fitting Mary Louise-style cardigans and dress pants that will make things easy.

Possibly my favorite mother/daughter duo on the show (despite Abigail unintentionally being a catalyst for Madeline's infidelities coming out into the open), Madeline and Abigail share a lot of sweet moments throughout season 2. A most iconic one, perhaps (thanks to the viral image of Madeline throwing her ice cream cone at Mary Louise, which didn't make it into the show), is when the blonde duo went out for ice cream and a stroll. Their casual daytime looks are easy to recreate — don't forget your faux ice cream cone so you carry it around all evening long without worry about a melty mess.

Women's Navy Floral Fitted Satin Shirt
Hawes & Curtis
Pencil Skirt
J. Crew Factory
Faux Whipped Ice Cream Cone
Etsy / FakeCakeBake
More like this
Every Horror Movie Reference In The 'PLL: Original Sin' Premiere
By Alyssa Lapid
Dr. Anna Pou Is Still Practicing Medicine After Facing Murder Charges
By Brad Witter
Everything To Know About 'For All Mankind' Season 4
By Sophia Moore
Everything To Know About 'A League Of Their Own' Season 2
By Morgan Leigh Davies
Get Even More From Bustle — Sign Up For The Newsletter