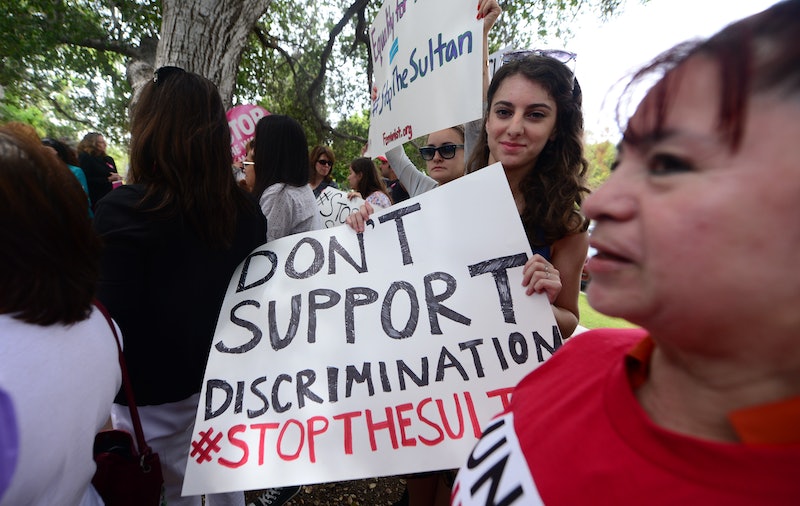 In order to combat the harassment and discrimination women often face in mixed-gender settings, women-only spaces have become popular. These places and events can lower the chances that women's voices will be drowned out by men's, as well as decrease the pressure to perform for the male gaze. But certain language and policies in women's spaces can unfortunately become exclusionary — and therefore, ironically, anti-feminist.

Spaces designated for women aren't inherently bad, but they do have a long history of being problematic. Take, for example, the controversy surrounding the Michigan Womyn’s Music Festival, which ran from 1976 through 2015: The festival faced accusations of being trans-exclusionary, in response to which founder and organizer Lisa Vogel wrote in an open letter in 2014. Although Vogel maintained in the letter that the festival's intention was "not a policy, or a ban on anyone" and stated that "trans womyn and transmen have always attended this gathering," she also wrote, "This space, for this week, is intended to be for womyn who were born female, raised as girls and who continue to identify as womyn."

It's also worth noting in the discussion of women-only spaces that non-binary people — those who don't identify exclusively as men or women — are rarely mentioned. Even the names of these groups often reflect this. For example, while it was open to people of all genders, the recent Women's March on Washington's name suggested it was primarily for women. Language matters, and when it's not inclusive, it can ultimately have the effect of erasure.

Women-only spaces are intended to be safe — and in a world that's still rife with misogyny, it's easy to see why they might be appealing. But that doesn't prevent them from falling into anti-feminist traps, even unintentionally. Here's how that can happen — and how they can work to be better.