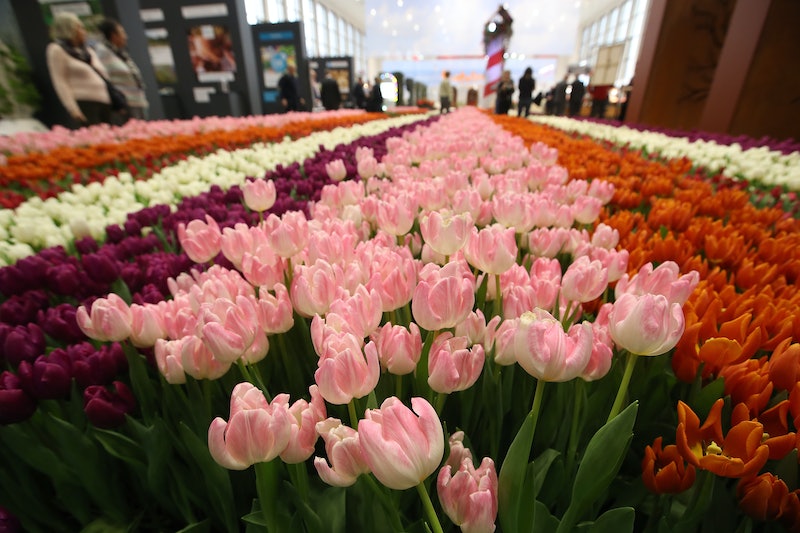 They say a rose is a rose is a rose — but isn’t it also something else? We all know that a gift of red roses means something very different than a gift of yellow daisies or white carnations or even yellow rose. Human beings have been assigning meaning to flowers for ages; asking their delicate petals to carry much more weight than simple ornamentation.

“Flowers are one of the most obvious symbols of love and romance, especially with examples like the classic red rose and the plush pink peony,” Claire Larkin, language expert at language learning app Babbel, tells Bustle. “No Valentine’s Day would be complete without their appearance.”

But where do those meanings come from? They’re certainly not universal. For example, a bride in the United States may choose to have white roses in their bouquet, but in China they’re used for funerals. And while much of the meaning behind flowers comes from the meaning each culture assigns to certain colors, there are other influences as well.

“While floral symbology has been around for centuries, most current associations with flowers can be traced back to the Victorian Era’s obsession with floriography, or ‘the language of flowers,’” Larkin says. “The Victorian upper class and bourgeoisie, engrossed with aesthetics and left with too much time on their hands, developed an intricate system of secret meanings for flowers. Floral arrangements were no longer just something nice to look at, but a means to deliver discreet messages.”

So what kind of message are you sending this Valentine’s Day? As Larkin notes, many people feel that Valentine’s Day wouldn’t be complete without red roses. And the numbers back that up: According to an investigation by Vox, Americans will spend $2 billion on red roses this Valentine’s Day. The same investigation found that the flower industry contributes greatly to climate change, both by flying flowers from South America and by transporting them across the United States in refrigerated trucks.

If the message you want to send is “I’m into you — but not so into climate change,” it might be worth it to consider a more sustainable flower option for Valentine’s Day this year. That means shopping for flowers locally, which means your pretty blooms aren’t being shipped across land and ocean to get to you. If you’re not sure where to get local flowers in your area, Vox recommends checking out the Slow Flowers’ website, which is a directory of more than 700 growers in the US and Canada who offer local blooms. Combine that resource with this list of five flowers that are in season on Valentine’s Day, the regions you can find them, and what they symbolize for a more environmentally friendly Valentine's Day.