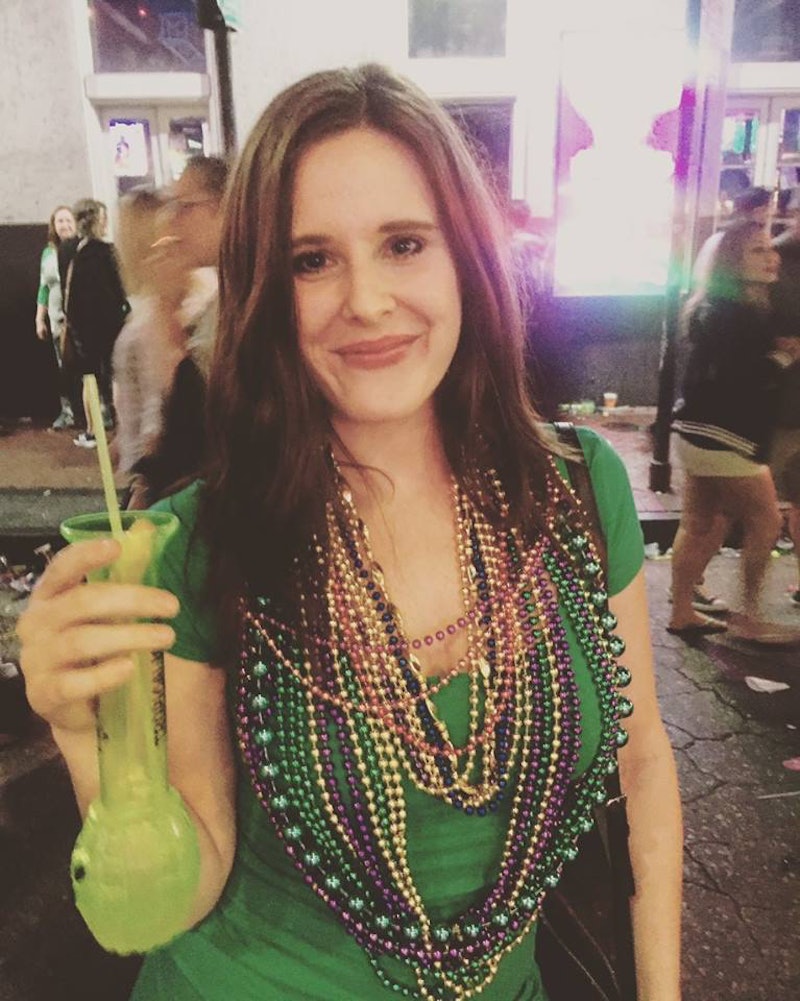 Even though dating apps are most popular among millennials, according to a recent Bustle survey with dating app Happn of over 1,000 dating app users, 78 percent of women and 85 percent of men still want to meet people IRL. That's why for the second year in a row, Bustle is deeming April, "App-less April" and encouraging our staff and readers to delete their dating apps for 30 days and meet people the old-fashioned way: offline. With participants tracking their progress and tricks and tips from dating experts, we'll be helping you feel empowered to meet people IRL all month long.

Not too long after my birthday, I made the choice to start going to therapy. It was an important one (and a decision my astrological mom credits to my Saturn Return) and when I look back on my 28 years of life, it’s been one of the healthier periods in my life. What encouraged me to book that appointment was how discouraged I felt about finding love. Since I ended a toxic relationship in my early 20s, I’ve spent the better part of nearly six years doing everything I could to find my unicorn of a man, that seems as far fetched to me as the ethereal creature I admired in my Lisa Frank notebooks.

I’d often walk into a date, bracing myself to be catfished, ghosted, or disgusted by who I had sitting across from me.

Given the era that I become an adult, the way to date was logging in, connecting your Facebook and swiping to your heart’s desire. So while I would have considered myself an "active dater" — most of my experiences weren’t vetted and didn’t get me excited. I’d often walk into a date, bracing myself to be catfished, ghosted, or disgusted by who I had sitting across from me. And though I went on plenty of dates for a while, I hit a wall where my self-confidence plummeted. Here I was, dating so much, but not finding one guy I’d actually like to make it official with. I started to doubt myself, my attractiveness, my personality, all of it. And though the optimist in me hates to admit it, I began feeling bitter. I felt forced to online date, even though I didn’t want to.

"Online dating gets perceived as competition with the person above, below, left, or right of you," Clarissa Silva, behavioral scientist and author of relationship blog You're Just A Dumbass, tells Bustle. "You’re looking for a specific set of qualities that complement you. So is everyone else. At the end, you expect that you will get what you want and so will they. When we receive multiple messages from multiple users, it enhances our self-esteem. However, if the messages are from people you wouldn’t normally want to connect with, it impacts your self-esteem negatively."

The first thing my therapist said when I sat down on that iconic couch (yep, it’s most always a couch, for the record), was ‘why be on the apps when don’t want to be?’ It was a fair question and one that I only had one answer to: buh-bye Tinder. Hinge. Bumble. All of ‘em.

In the months that have passed, I’ve felt so much better, so much happier and so much more ready to actually find love. If you're participating in App-less April, Bustle's challenge to delete your dating apps for a month or thinking about taking a longer break from online dating, here’s what you should know about how breaking up with dating apps affected my self-esteem:

It might seem like a no-brainer concept: but when you’re out-and-about or just hanging with your friends, it’s natural to talk to others at the party or bar, right? Not quite. Because we’re all so heads-down to our phones and we consider "dating" bucketed off into a folder on our iPhone, we’ve stopped mingling in the traditional way as often as we used to. But when you don’t have a notification that someone ‘Super Liked’ you, you’re more inclined to strike up a conversation while waiting for your beer to arrive. Though I might not always get the response I want, I at least, try more frequently than I used to.

I’m lucky that I live in New York City where there is always something happening, all the damn time. I usually can’t keep up (and don’t know any New Yorker who does, to be fair), but I was even more disconnected when I was online dating. Even if I was having patio drinks with a gorgeous sunset over the skyline or watching live music downtown, I’d find myself distracted by who was messaging me and who wasn’t. But now? I fully engage — as much as I can — with my friends and the day-to-day experiences in my life. It’s been fascinating to see how much I was missing out on while worrying about messages from a guy that really, would never mean anything to me.

The big issue I talked about with my therapist (and actually still kind of do) is around the effort it takes for me to physically leave my apartment or office and go on a date. When given a long list of other options — working out, going to the dentist, sitting through a long lecture on little sleep — I would almost pick anything but dating. That’s how burnt out I was. Because I was going on dates for the mere act of going on them to feel like I was putting in the effort to find "The One"— not because I wanted to. Now, since I’ve cut out my lifeline to dating, when I actually meet someone in real life (imagine that!) — I look forward and get excited about the date again.

...or at least I think so. Letting go of those apps (and likely, going to therapy), helped me relax about the whole shebang. Because it’s not a weekly "to-do" but rather, something that happens when it happens, I enjoy the process in a way I haven’t before. Even if I don’t like the guy (which yep, still happens offline), I let the conversation teach me something and use the opportunity to try a fun drink or get a travel recommendation.

The most important one? I’m more confident. I know that I’m worthy of a great love — and better yet — that I will find one, one of these days. Relieving the pressure and the anxiety that online dating created freed me to become a version of myself that was assured in who she was, content with her life and of course, open to whatever — and whomever — comes next.