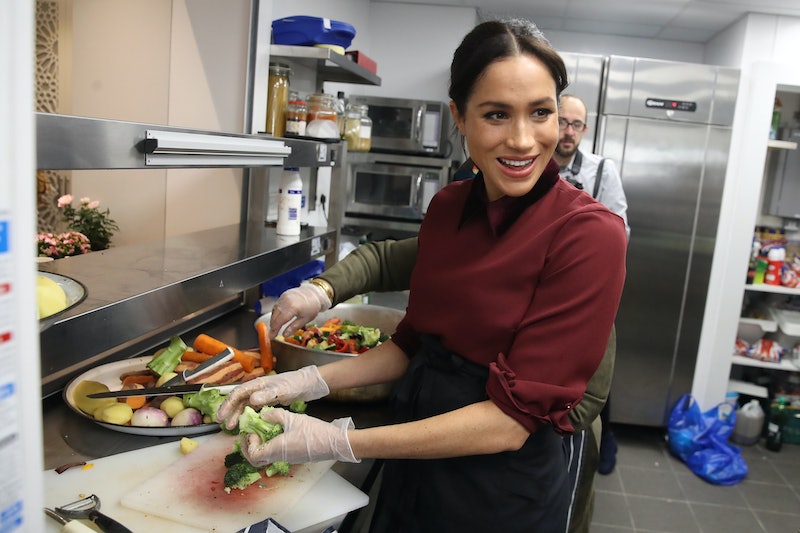 With a new year comes a chance to try (again) to do all the things you didn't do last year. Even though you can set goals at literally any time, when the calendar turns over to January 1 once again, it feels like the right time. (Thanks, Gregorian calendar and society!) And who better to help you reach your goals for 2019 than Meghan Markle, Duchess of Sussex.

So, she can't help you directly. Markle is not teaching an online course, releasing a self-help book, or bringing back her lifestyle blog, The Tig, which surely would've included a post about ringing in the new year right. But that doesn't mean she can't still help out. Markle has written essays and blog posts, and given speeches and interviews over the years that let us know how she operates. Also, we can just see how she operates because she's now one of the most famous women in the world.

Here are six lessons you can take from Duchess Meghan and apply to your own goals for the new year. (And if your goal is "become a member of a royal family," um, I guess just follow all of these?)

Stay True To Yourself

Markle is a member of the British royal family now, and even with all the expectations she has to meet, she's still staying true to herself. She's made it her mission as a royal to empower women, she's supporting her friends at fashion events, she's going to Whole Foods in disguises. When it comes to setting any goals, make sure they're ones that feel right for you, and be sure that the way you choose to meet them stays true to you, too.

Don't Let Negativity Get You Down

Markle has a difficult family situation, especially with her half-sister constantly talking to the press. This could have led some people to avoid such a major spotlight altogether, but she followed her heart, had an amazing wedding with her mom by her side, and is carrying out her duties and then some. Surely, the family drama does get Markle down sometimes, but she's not letting the negativity stop her from achieving her goals. See? Lesson!

Give Yourself A Break

Self-care is a big buzzword right now, but for real, resting is important. When Markle and Prince Harry went on their tour of Oceania right after she announced she was pregnant, Markle ended up cutting back her schedule some so she could rest. Pregnant, not pregnant, stressed out from normal life stuff or working toward something hard, taking a break is good. Your whole goal could even be to rest more.

This one is more of a goal in itself than inspiration for something else, but if you're looking to be more charitable this year, Markle makes for a great role model. Before she married Harry, Markle was a World Vision Global Ambassador and a UN Women advocate. More recently, she's been working with the Hubb Community Kitchen and wrote the foreword for their cookbook.

Don't Be Afraid Of Intimidating Situations

Markle went from a semi-known actor to the soon-to-be mother of the seventh in line to the British throne in a very short amount of time, and she's handled it all like she's an expert. I mean, just look at her laughing with the Queen during the appearance they made together. If she can look that at ease with the Queen, then you can probably do whatever your thing is, whether it's approaching a new job situation or putting yourself out there more socially.

Know You Are "Enough"

Setting a goal and then not meeting it can be frustrating, which is why it's good to go into things knowing that some goals are met, and some aren't, so that you won't feel like you "failed" if things don't work out. Or, as Markle would put it, know that you are "enough". She wrote about the idea a few years ago in a piece for Darling magazine that described an encounter she had with a casting director who could see she was lacking self-confidence and told her, "You need to know that you’re enough." This went on to inspire Markle for years to come, and it's a good reminder for anyone, especially if you're working on making a change in your life.

There you have it. Six pieces of inspiration from Meghan Markle. Now, if anyone does make their way into a royal family, please let me know.