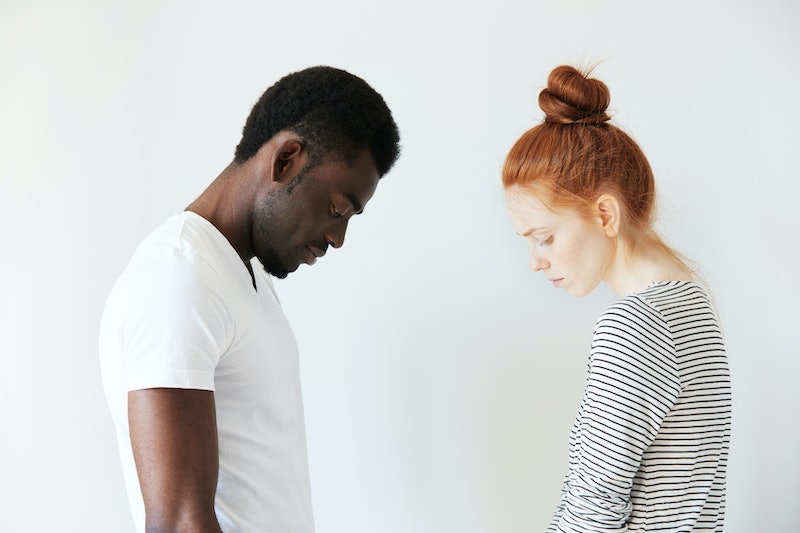 If you've yet to experience a breakup, there's a good chance that you probably will at some point. According to a March 2016 study, 70 percent of heterosexual unmarried couples break up in the first year of dating and other similar research has found that breaking up even before the two-year mark is more common than you'd think. Although breakup rates begin to drop once couples make it to five year or more, the fact remains that a lot of us probably have a breakup or two in our past and in our future.

But when you start to feel the ground beneath your relationship get a little wobbly and you're pretty sure a breakup is on the horizon, the next step is how you handle it. While you know the aftermath, when your brain is officially going through the breakup, isn't going to be easy, you might want to take a moment, before you totally give up, to ask your partner some questions. For starters, are they feeling this shaky ground, too?

"I think engaging in a conversation about what people want individually in their lives is helpful," licensed psychologist, and founder and CEO of Rapport Relationships, Dr. Jennifer B. Rhodes, tells Bustle. "Oftentimes there is no communication or we are dating someone who is not emotionally available enough to have such a conversation. Opening up the dialog will give you the data you need to decide if the relationship is worth saving."

While this just might be a break and not a breakup, it's still important to have your ducks in a row, so to speak.

Here are seven things to ask your partner before you break up.