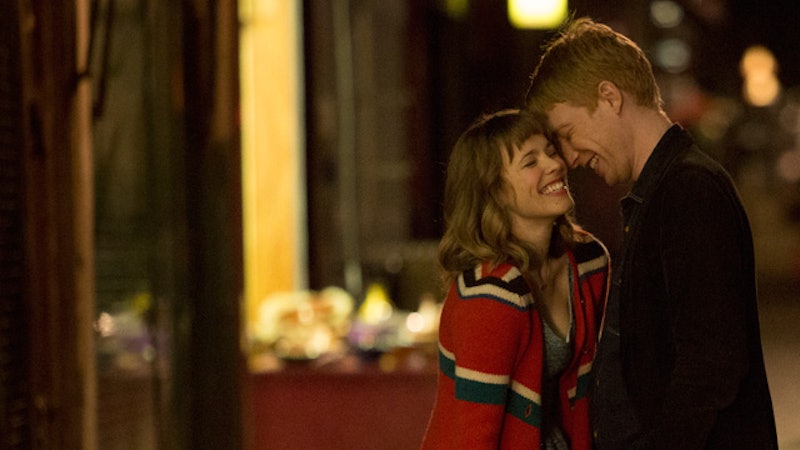 Not everyone celebrates Valentine's Day in the same way, and not everyone's love story has the same trajectory. Sometimes, things get a little well... weird. Sci-fi weird. This Valentine's Day, Hollywood is offering up a rom-com with a sci-fi twist. Isn't it Romantic stars Rebel Wilson as Natalie, a woman who suffers a bump on the head and finds herself in an alternate universe where she's the star of your typical romantic comedy. The trailer for the movie hints at nods to other unusual comedy favorites like Groundhog Day and Big, where the lead character has to navigate a strange world while also falling in love. If Isn't it Romantic? sparks your fancy, or even if you're into movies that are a little more strangeness with their romance, fear not. There are plenty of other sci-fi romantic movies streaming right now that offer up a bit of a weird, nerdy angle.

There are, of course, a ton of sci-fi and action movies that have romance in them, like Inception, The Crow, Donnie Darko, and The Empire Strikes Back, but in the movies below, the romantic bits take center stage. From time travel, to outer space, to the apocalypse to futuristic science, here are some easily accessible romantic movies that have a genre bent.

1. Eternal Sunshine Of The Spotless Mind

Jim Carrey and Kate Winslet play lovers Joel and Clementine in this epic love story that jumps back and forth in time. After a bad breakup, Clementine has a procedure done that erases Joel from her memory. When he decides to have it done as well, we get to watch their love story blossom in reverse in the strangest and most touching way. The end proves that sometimes love is destiny. If you need help following the storyline, pay close attention to Clementine's rainbow of hair colors.

Joaquin Phoenix stars in this strange 2013 love story from director Spike Jonze. In an unspecified near-future, Phoenix's Theodore is a lonely greeting card writer who installs a new operating system on his computer. Scarlett Johansson plays "Samantha," the OS voice who grows more and more human over time. The whole film has lots to say about personal interaction and our reliance on artificial intelligence.

3. Seeking A Friend For The End Of The World

If the world was going to end in three weeks, how would you spend your time? For Penny (Keira Knightley) and Dodge (Steve Carell), a world-ending quest turns into true love. With an asteroid heading for Earth, Dodge's friends embrace a rampant life of sex and drugs, but he can't bring himself to a downward spiral. So he decides to help Penny see her family in England one last time.

Warm Bodies is a teen rom-com with a macabre twist: one of the young lovers is dead. Well, he's a zombie; a reanimated corpse after some kind of virus divides the world into those alive and those... sort of alive. Nicholas Hoult plays R, a zombie who falls in love with Julie (Teresa Palmer). You could say she makes his heart beat again.

Based on the best-selling novel of the same name by Audrey Niffenegger, The Time Traveler's Wife tells the story of Claire (Rachel McAdams), a woman whose known her husband her entire life not because they met as kids, but because when she was a kid, he traveled back in time to visit her. Eric Bana plays Henry, a man who inexplicably jumps around to various points of his own life. When you already know your future, as Claire does, do you embrace it, or fight it? And how does love blossom as a result?

Streaming on iTunes and Vudu.

No, you're not seeing things, Rachel McAdams stars in, yes, two movies in which her significant other travels through time. In this flick, which is a bit more comedic than The Time Traveler's Wife, Domhnall Gleeson discovers that the men in his family can time travel and uses his newfound skill to win over the love of his life, Mary (McAdams.)

7. The Space Between Us

This 2017 teen sci-fi romance kind of came and went without a blip, but it has a cool premise and charming performances. Asa Butterfield stars as Gardner, the first human ever born and raised on Mars. When he finally gets to Earth, the first person he wants to see is Tulsa (Britt Robertson), the young woman with whom he's been communicating from space. But Tulsa doesn't know Gardner's spacey secret, and he may not be able to survive on the planet's surface.

Ewan McGregor and Léa Seydoux star in this sci-fi romance from director Drake Doremus, whose Felicity Jones and Anton Yelchin romance Like Crazy was a big indie hit. McGregor plays a scientist who invents an AI system much like Match or eHarmony, only far more advanced, that matches people based on statistical data. We can't give away too much about the plot of this movie without spoiling a huge reveal, but let's just say Zoe could effectively be Her 2.0.

Zoe Kazan and Michael Stahl-David star in this paranormal romance about two people who can see through each other's eyes, hear each other's voices, and feel each other's touch. Written and directed by Joss Whedon, In Your Eyes features a pretty steamy love scene where both participants are technically solo.

Sometimes you need something a little different from the average romance. These movies will spice up your Valentine's Day in unexpected ways.