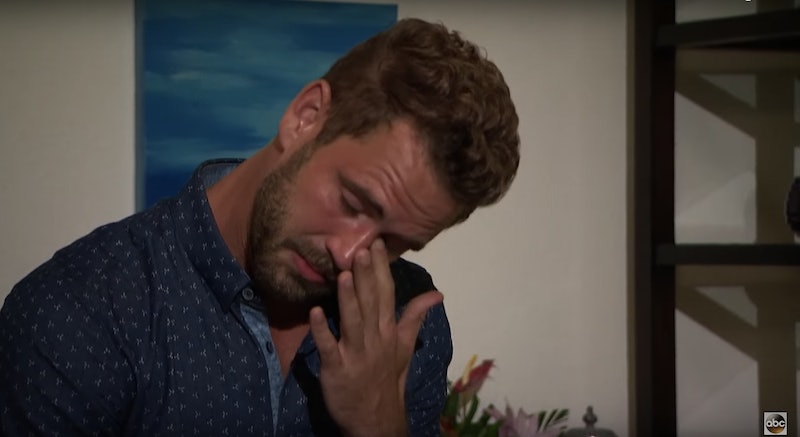 Bachelor fans are now on Week 4 of life sans the reality TV show after Nick Viall's Season 21 finale, and life is rough. The Bachelor isn't just a show — it's a next-level experience that gets fans out of their mundane routines and helps them through their work weeks. Now, fans need ways to cope with The Bachelor being over. Last season, the commitment was amped up a notch. After Viall appeared on Andi Dorfman's season of The Bachelorette and Bachelor in Paradise, it seemed fans were collectively a bit more invested to see how this returning member's fate would pan out. Watching Viall's continued journey with Vanessa Grimaldi, his chosen fiancé, has been interesting, to say the least. And in the age of the internet, there are a boatload of ways to stay entertained by the show and fill the void until it returns.

Luckily, there are two Bachelor shows on the horizon: Season 13 of The Bachelorette premiering on May 22, and Bachelor in Paradise is returning this summer. Thank the reality TV heavens. Not to mention, Rachel Lindsay's upcoming Bachelorette season is one that should be anticipated, not only because Lindsay is the first bachelorette who's a WOC, but because she's also an all-around boss. So, until the magic returns and she makes Bachelor/ette history, here are some ways to feel like the show never really left.

Seriously, it's like the show never. stopped. airing. Bachelor Viall constantly posts photos of life with his fiancé being totally *normal* in the real world and grabbing her butt while running errands.

Why this is particularly interesting right now: Fans have doubts about Viall and Grimaldi ever since that awkward After the Final Rose interview. But seeing this view of their life through her Instagram, (although it's a filtered one) can let fans decide for themselves.

3. Watch Dancing With the Stars

The current season gives another angle into Viall and Grimaldi's life together, as Viall competes for the trophy on the ABC competition. There are snippets of Grimaldi cheering him on in the crowd, and yes, the performances are on YouTube. P.S. Did anyone else expect him to actually be this good?

Fans got a glimpse of what Lindsay will bring to the table when she was a contestant last season, but now she's front and center. The Bachelorette's Instagram alone shows she's already living the life, attending red carpets, and meeting celebs on her journey to find a husband. She's already racked in nearly half-a-million followers, so clearly fans are interested.

5. Listen To Episodes Of Bustle's Will You Accept This Podcast?

Not only can you relive the last season with week-by-week rundowns, but you'll get fresh insight from former bachelors like Sean Lowe and Josh Murray, along with input from celebrities like June Diane Raphael.

6. Read Andi Dorfman's 2016 Book, It's Not Okay: Turning Heartbreak Into Happily Never After

Not only does this allow fans to take a trip down memory lane and revisit old flames and past contestants (cough, Juan Pablo), but Dorfman shares juicy behind-the-scenes information that's really enlightening. It'll make fans view the upcoming seasons in a whole new light.

Because they never get old. Unfortunately, Viall's tear sessions aren't included in this video, but I'm almost positive cry reels dedicated to him are out there somewhere.

Fans desperately miss the drama of The Bachelor, but there are some seriously funny and lighthearted moments tucked into the show too. The comedic relief is always needed, especially when fans are hurting during hiatus.

9. Take A Peek At Lindsay's Season Through Mike Fleiss' Twitter

Last month, the show producer tweeted some BTS shots of what's to come next season, including Lindsay in a limo, the house set, and a cake for the crew. He hinted at the season, writing, "I think @TheRachLindsay will be one of the Top 3 Bachelorettes of all time. She is wonderful!!!" So, fans should be amped if they weren't already.

See, Bachelor Nation? It's not so bad after all. And if these methods to cope with the absence of the show don't work, you can always have a good cry, Viall style, to let it out.