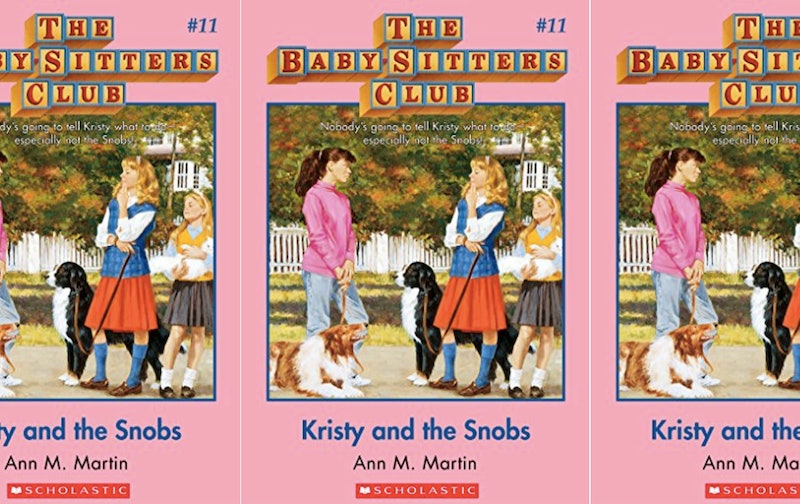 Scholastic/Amazon
By Meghan DeMaria
May 23, 2018

Rejoice, '90s kids: One of your favorite childhood stories may be heading to the small screen soon. On Wednesday, The Hollywood Reporter revealed The Baby-Sitters Club is being adapted for TV. Currently, it sounds like the show, based on the popular Scholastic book series, will be shopped to multiple networks, so it doesn't have a permanent home just yet. But really, what network would want to pass on the latest adaptation of the popular books?

The new series will have some big-name talent attached, too. While the cast hasn't been announced (and probably hasn't even been decided yet), Rough Night director and Broad City producer Lucia Aniello is in talks to direct the series, according to THR. And Rachel Shukert, who's worked as the executive story editor on Netflix's GLOW, is in talks to be The Baby-Sitters Club's showrunner. As THR pointed out, this wouldn't be the first time the beloved series by Ann M. Martin has been adapted on screen. There was an HBO BSC TV series, as well as a 1995 movie. But those were decades ago, so it's about time that there's a new Baby-Sitters Club adaptation on the market.

It won't be hard to keep the series relevant for a 2018 audience — after all, babysitting is a job that will always be around, as long as people keep having kids. But Walden Media, which will produce the new show, also cited the titular babysitters' "entrepreneurialism" as a theme for the new series. In a statement to THR, Walden Media senior VP of development and production Naia Cucukov said,

"As lifelong fans of The Baby-Sitters Club and its enduring messages of entrepreneurialism, empowerment, diversity and most importantly, female friendships, we couldn't be more thrilled to work on this special project with Rachel and Lucia. We feel incredibly honored that Ann M. Martin has allowed us the chance to introduce the BSC to a new generation of future thought leaders and influencers."

The Baby-Sitters Club books followed a group of friends who created a club to, as the name suggests, babysit local children in their Connecticut town. This was way before Facebook and Twitter, so word of mouth (and landline phone calls) were the club's best way of getting new business. The new show will have to incorporate new technology, of course, but there's not really much in the overarching plot that would need to change.

In plenty of ways, The Baby-Sitters Club was timeless, and fans still remember the books' feminist lessons for young readers. The new show could bring in new generations of fans, too, especially people who didn't grow up with the HBO series. The book adaptation may seem like a surprising choice at first, but it shouldn't be. After all, plenty of other classic books, like A Wrinkle in Time and The Handmaid's Tale, have been adapted for movies and TV recently. And besides, The Baby-Sitters Club's audience spans multiple generations, a fact that made for a perfect storyline on Unbreakable Kimmy Schmidt's first season.

Fans of the original '90s TV show will also remember the show's catchy theme song, "Say Hello to Your Friends." The new Baby-Sitters Club probably wouldn't use the same song, but how fun would it be if, say, one of the characters wore a T-shirt with the slogan in the new show's pilot? That's probably just wishful thinking, but it's safe to say there are plenty of nostalgic twenty-somethings out there who will tune in to the new show.

The Baby-Sitters Club is timeless, and the books continue to inspire young girls. It's thrilling to see the book series will be played out on screen again — hopefully fans won't have to wait too long for the new series.