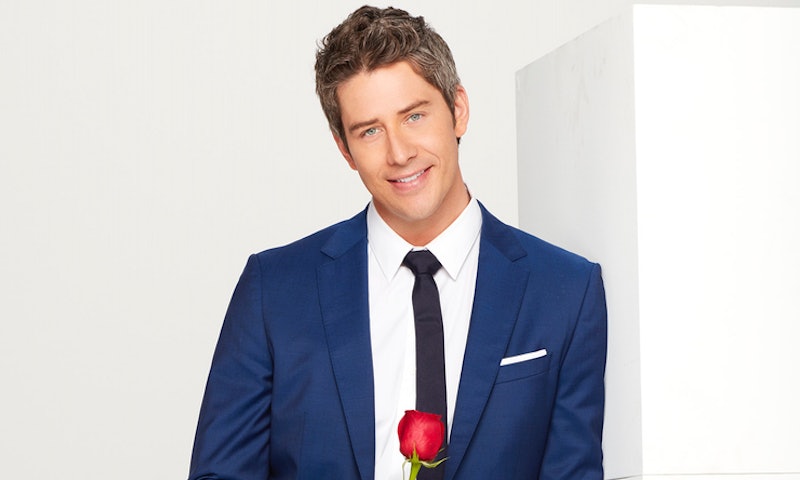 If you weren't happy to hear that Arie Luyendyk Jr. is the new Bachelor, then you're not alone. In fact, one fan is taking action by starting a petition to let America choose the next Bachelor. The creator of the petition, Jane Stolar from Los Angeles, CA, makes the case that ABC has been "downright lazy in its selection of Bachelors," citing Arie as the final straw. And you've got to admit that having the viewers choose the next Bachelor does seem like the kind of boost the show needs after 22 seasons.

The petition, aimed at ABC and titled "Let America Decide The Next Bachelor," says that allowing Bachelor Nation to take the keys could make that journey to the final rose even better. In fact, Stolar believes fans "are owed this opportunity" to "right the wrongs of the franchise." In this viewer's opinion, the biggest wrong is choosing "lame, boring Arie" because "no one is excited about Arie." That statement may not be entirely true, but, of the 16 fans who already signed the petition, two seemed to share that opinion. "The people deserve a voice!" one fan commented, while another wrote, "Get him out! Let us choose! We need this!"

But, whether you like Arie or not, the suggestion that fans should pick the next Bachelor is a good one for the network. Instead of executives trying to pick a person that will draw in viewers, fans would tell the network exactly who they want to watch. In that way, clearly, Bachelor Nation will already be invested in the guy's journey.

When it was announced that Arie, the runner-up on Season 8 of The Bachelorette with Emily Maynard, was the next Bachelor, fans were certainly surprised. Others, though, were disappointed that ABC had to go so far back to choose the newest Bachelor. After all, it's been five years since Arie competed for the final rose and so many people had other, more recent, choices in mind to be the latest Bachelor. This included Peter Kraus, the runner-up from the last season of The Bachelorette with Rachel Lindsay, who was referenced most often in the "Why is Arie the Bachelor?" memes and tweets.

That doesn't mean people weren't happy to see Arie, but there is some truth that he's a choice from a simpler time, which some may think is boring. That's something that Evan Bass — who competed for JoJo's heart on Season 12 of The Bachelorette and later found love on Bachelor In Paradise with Carly Waddell — noted in a pretty perfect tweet. "I like Arie as #thebachelor," he wrote. "He represents a purer time before gummies & laxative tea."

It's true that, despite Arie only having been on the show five years ago, that's a lifetime in Bachelor years. But if you're a guy who appears on The Bachelorette but doesn't win, you could end up the next Bachelor, or you could appear on the spin-offs like Bachelor In Paradise or the newest show, The Bachelor Winter Games.

While the petition makes the case that Arie is "boring," the show is trying to sell him as a man who, five years after having his heart broken, is ready to find love. That's a compelling redemption story, one that millions of fans are sure to tune into when The Bachelor Season 22 premieres on New Year's Day.

But having the next Bachelor be a fan favorite would spice up the show, which too often is stuck in its ways. The franchise has been criticized for the lack of diversity in its leads — Rachel Lindsay was the first Bachelorette of color and the Bachelors remain overwhelmingly white before and after the likes of Juan Pablo — and the series only this year featured a female contestant with a pixie haircut.

Giving fans more control may just lead to some interesting and much-needed updates — or, at the very least, a chance for fans to finally see Peter find the woman of his dreams.