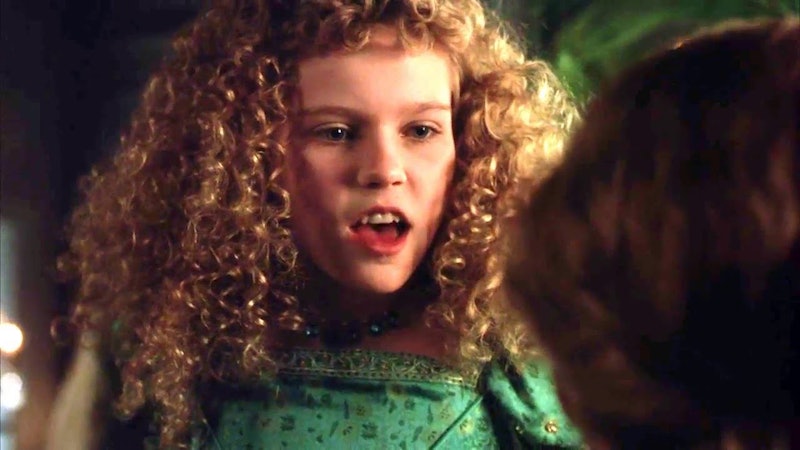 And today in weird, fascinating, and somewhat sad history, the grave of a child who had been given a “vampire burial” in the 5th century has been uncovered in Lugano, Italy. The child was found with a stone in their mouth, a practice which was believed to have prevented vampires from rising from their graves. There’s more at play here than just fear of the supernatural, though; vampires were thought not just to consume human blood, but also to spread infectious diseases — and there’s evidence to suggest that the buried child died from malaria.

According to Smithsonian, the vampire burial was discovered at Lugano’s La Necropoli dei Bambini, or Cemetery of the Babies. The cemetery was built on an old abandoned villa from the 1st century; most of the remains buried in it, however, date back to the 5th century, at which time a malaria epidemic swept through central Italy. As you might have guessed, La Necropoli dei Bambini contains solely children, who would have been particularly vulnerable to the outbreak.

The child who appears to have been given the vampire burial looks to have been about 10 years old at the time of death. That’s interesting in and of itself; up until now, the oldest skeleton found belonged to a child who had died at only 3 years old, according to Science Daily. An abscessed tooth provides the clue to the 10-year-old’s cause of death; it’s indicative of malaria. What’s more, tooth marks on the rock found within the child’s mouth suggest that it was placed there intentionally.

It thoroughly spooked the researchers. “I’ve never seen anything like it. It’s extremely eerie and weird,” University of Arizona anthropology professor David Soren said according to Live Science. Soren has been managing archaeological excavations of La Necropoli dei Bambini since 1987; he added that the child has earned the moniker “the Vampire of Lugano” among locals.

As “eerie” and “weird” as it is, though, so-called “vampire burials” aren’t a newly discovered phenomenon. Several other similar graves have been uncovered in recent years, with the methods of burial ranging from the positioning of stones or bricks in the corpse’s mouth to the embedding of stakes — either wooden or metal — in the body’s trunk and limbs. Several skeletons have also been found beheaded, with the heads placed by the feet — possibly to prevent the “undead” people from being able to position their own heads back on their necks post-burial.

Staking someone to the earth is a relatively self-explanatory form of anti-vampire interment; you can’t very well rise from the dead if you’re pinned to the ground with huge, sturdy spikes. But what’s up with shoving bricks and rocks into people’s mouths? How is that supposed to stop a vampire from rising from its grave?

The answer to that question lies in folk beliefs: In certain countries and cultures during the 16th and 17th centuries — like, for example, Italy — it was thought that vampires could literally eat their way out of graves. Therefore, if you put something heavy and hard in their mouths before you bury them, they won’t be able to do so.

After the 2009 discovery of a suspected vampire burial on the Italian island of Lazzaretto Nuovo near Venice, forensic anthropologist and archaeologist Matteo Borrini explained to Archaeology Magazine exactly what may have prompted the belief that vampires were capable of eating their way out of graves. According to Borrini, the superstition likely arose from “a misinterpretation of thanatological (death-related) data” — that is, people just didn’t understand how bodies decompose, and when they attempted to explain it, they got it wrong. Said Borrini:

“In the 16th and 17th centuries, little was known about what happens to the body after death. They knew about immediate postmortem changes, such as cooling of the body (algor mortis) and temporary stiffening of the muscles (rigor mortis), but these changes don't really alter the appearance of the deceased. The ensuing decay and decay and putrefaction — which reduce a corpse to a skeleton — were poorly understood because they happen in the grave. When graves were reopened, it was usually after years, when the body had completely turned into a skeleton. So they associated death with a cold and stiff corpse or blanched skeleton, and allegorical paintings from the time confirm this.”

“Reports of vampires in graves actually describe a corpse during decomposition. The rigor mortis would have disappeared. A phenomenon called epidermolysis would be visible, in which the epidermis loosens from the underlying dermis and the nails fall off, exposing the nail beds and giving the impression of new growth. At the same time, the corpse would be going through the putrefaction stage in which the abdomen gets bloated from the build-up of gases. The decay of the gastrointestinal tract contents and lining create a dark fluid called ‘purge fluid’ that might flow freely from the nose and mouth and could easily be confused with the blood sucked by the vampire. And if a corpse was wrapped in a shroud, putrid gases and purge fluid flowing from the mouth would moisten the cloth so that it would sink into the mouth (which would open as the muscles relaxed after rigor mortis), where the fluids would break it down.”

When a body was dug up mid-decomposition (which might happen if, for example, a gravedigger had to open up a mass grave), what people would have seen was a body that looked very different than it did when it initially went into the ground — one which appeared to be eating its own shroud with a mouth covered in blood. Without the knowledge of what was actually going on, you can see how one might arrive at the conclusion that the person was a vampire. The solution to future issues with other suspected vampires based on this observation, therefore, became shoving something in the mouth before you buried them as a preventive measure.

It’s also interesting to note, by the way, that a lot of the “vampire burials” we’ve uncovered have been of people who likely died of infectious diseases. There’s evidence that the child in La Necropoli dei Bambini had malaria; a set of vampire burials found in Poland may have died during a cholera epidemic (although it’s worth noting that other theories have since emerged that the burials weren’t to prevent vampires from rising, but rather to protect the dead from demons, or even that the remains simply belonged to people who had died by execution); and Lazzaretto Nuovo in Italy was a known burial ground for plague victims (although it’s also apparently possible that the woman found there in 2009 was an accused witch).

The bottom line is that humans do weird things when faced with something we don’t otherwise understand — but just because we don’t get it yet doesn’t mean that we never will. And, I mean, hey, if we can adjust our thinking from believing that vampires will kill us all by spreading the plague to believing that they sparkle in the sunlight? Well, let’s just say that it’s more than possible for us to change our tune — no matter how freaky we might find the original melody.