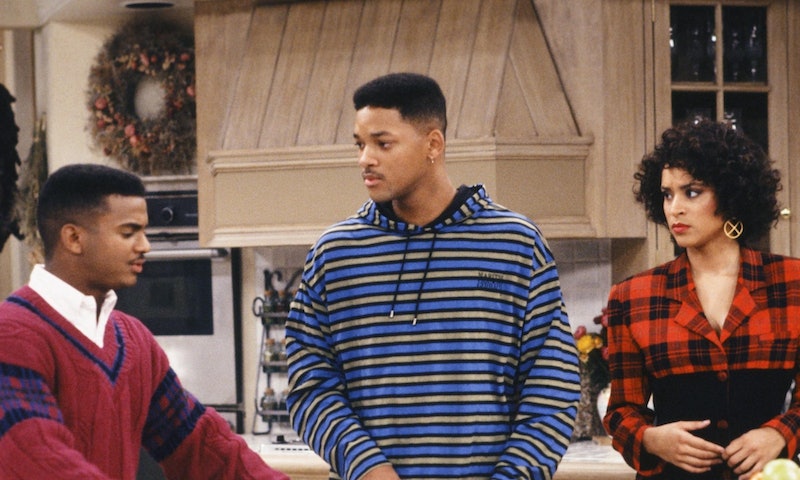 With all the remakes and reboots of your childhood classics coming out these days, maybe you thought The Fresh Prince of Bel-Air would be next. But one of the show's stars, Alfonso Ribeiro doesn't want a Fresh Prince reboot. And not only that, he's pretty sure fans don't either. But before you storm indignantly down to his house and knock his door down to demand he change his mind — or at least stop speaking for you — just hear the guy out. Because he actually makes some great points, and at the end of the day, he's just looking out for fans of the nostalgic series.

Ribeiro played Carlton Banks on all six seasons of the sitcom, which aired from 1990 to 1996. And even though plenty of other shows from that time frame have been scooped up for rebooting or revamping, like Sabrina the Teenage Witch, Roseanne, and Full House, Ribeiro doesn't think that Fresh Prince is a good fit for that same treatment. "I’m sure a [reboot] could happen, but I continue to say I think it’s very unlikely,” Ribeiro told PeopleTV when he stopped by their show Chatter on Tuesday, Oct. 23, and he had the talking points to back it up.

Ribeiro came to the show armed with three solid reasons why the show can't return, beginning with the glaring absence of two key cast members. The first is James Avery, who played the pivotal role of Will's Uncle Phil; the actor died tragically in December 2013 due to complications following an open-heart surgery. He was just 68 years old. "I think it’s impossible with James Avery being gone,” Ribeiro told the outlet, before explaining:

In short, it's the juxtaposition between the structure of Uncle Phil and the chaos of Will that provided The Fresh Prince of Bel-Air's secret ingredient. And without Avery there to reprise his role, you have only half the recipe. Or in this case, no recipe at all, because Ribeiro remains convinced that the show's one-time star would be impossible to sell on a comeback. As the actor laughingly told PeopleTV: "Will ain’t coming back! Listen, you know how much money they don’t have to get Will back? That’s the reality."

But at the end of the day, even if every other element fell into place, with Will Smith and all other cast members, writer, and crew member returning to slot into their original roles, Ribeiro still doesn't think the project would be a winner, and here's why. He rhetorically asked the outlet:

Essentially, he's saying thatThe Fresh Prince of Bel-Air was such a phenomenon that it's impossible to recreate it with the older cast. Watching a group of 40- and 50-year-olds goofing off the way their younger selves did just wouldn't be the same, and Ribeiro at least seems to feel that it would diminish some of the joy of the original even to try. Too much has changed since the show first premiered to make a reboot viable, so the best way to honor this classic is to leave it well enough alone. At least we'll always have the original.

More like this
Netflix Reveals First Look At Wednesday In The 'Addams Family' Spinoff Series
By Bustle Editors
A New 'And Just Like That' Table Read Pic Confirms A Key Character's Return
By Jack Irvin and Grace Wehniainen
24 Years Ago, 'Friends' Dropped Its Most Underrated Ross & Rachel Episode
By Grace Wehniainen
20 Photos Of The 'Hocus Pocus' Cast Then & Now
By Radhika Menon
Get Even More From Bustle — Sign Up For The Newsletter