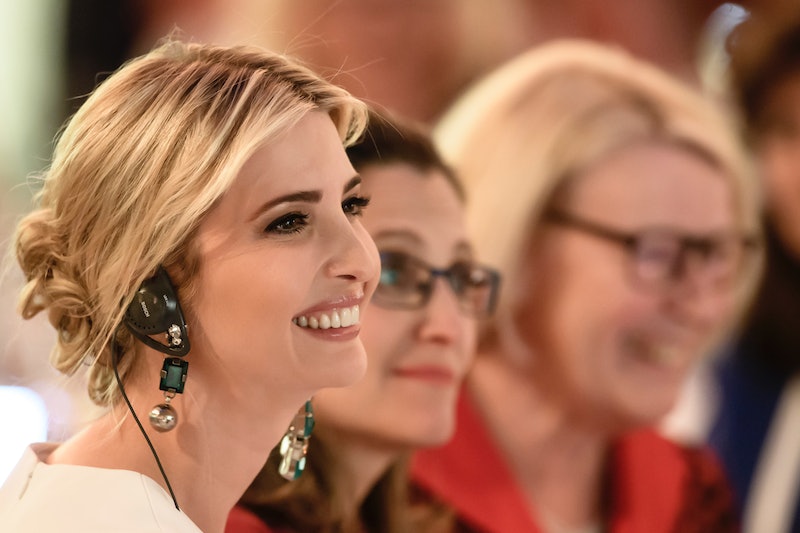 Ivanka Trump, *the White House's diet Trump*, has developed quite a skill for speaking, yet still saying nothing. In Ivanka's latest interview with Fox & Friends, this skill was ostentatiously on display as she expertly fielded easy question after easy question, knocking meatball after meatball right out of the park. Her complaints about the "viciousness" she and her family are facing in Washington and platitudes about their work on infrastructure really only reminded us of one thing: she has no achievements to speak of in the realm of women's rights.

While Fox News is certainly not known for giving the Trumps a hard time on national television, this interview was perhaps even more complimentary than usual. While most of the media is consumed with the fallout over James Comey's testimony and the continued Trump-Russia investigation, this was a chance for Ivanka to talk about her father's infrastructure plan and rave about how great their overseas trip was. Most notably, she talked about "[the] level of viciousness that [she] was not expecting."

"I think some of the distractions and some of the ferocity was — I was a little blindsided by on a personal level," she went on to say.

Her comments about "the distractions" (by which she means the Trump-Russia investigation) and the multiple attacks leveled at her really show how little she's taken them into account. She has continually pledged to be working on behalf of women, and yet all of her supposed efforts have come to nothing. The Trump administration has bent over backwards to slash women's rights across the board, and yet Ivanka never misses an opportunity to publicly defend its commitment to women — for which she has received a lot of due criticism.

This latest Fox interview gave her to opportunity to talk about a lack of women in STEM fields and the need for better family benefits, which she claims are issues that the administration is addressing. If Fox isn't your normal network of choice, however, none of this rings particularly true. Ivanka has proven again and again that her commitment to women is only for the sake of appearances, and that she's willing to support her father by defending his stance on women's issues but not actually put up a fight when things don't go her way.

And really, appearances were all that this interview was about. Fox gave Ivanka the chance to brush away "the distractions" plaguing her father's administration, without any admission that the Trumps themselves and their lack of deference towards the norms and laws that govern the country are where all the distractions are coming from. As usual, she was polished, family-oriented, forward-focused, glowing, a voice of calm in what she was painting as a fully manufactured storm.

What Ivanka seems to be ignoring, of course, is that some of those personal attacks on her could be abated if the administration she represents would only start working for women. For now, they're just using her to say that they're working for women — and as many have said before, she's totally complicit in that. It's clearly not a Trump trait to accept responsibility for criticism leveled against you — and on Fox News, it's also not necessary.