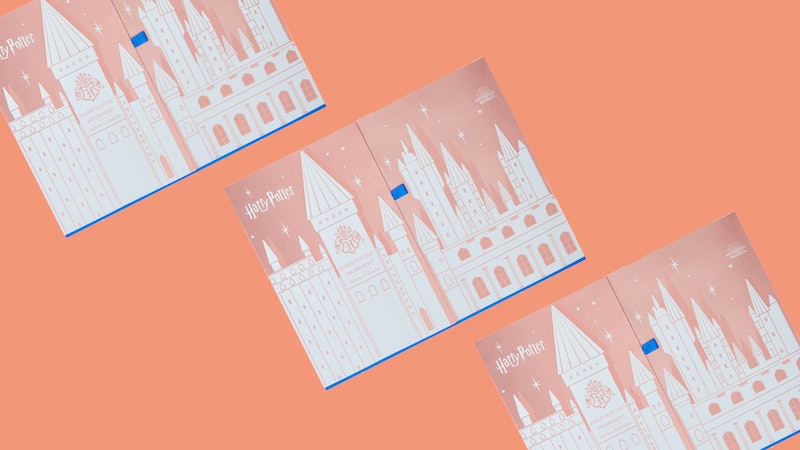 Beauty advent calendars have 100 percent replaced the traditional chocolate design. The only problem is most of them are pretty pricey. But much-loved high street brand Boots has found a solution that will delight any Potterhead in the UK: an affordable Harry Potter beauty advent calendar.

Costing just £35, the calendar will feature the requisite 25 doors, behind which you'll find plenty of Harry Potter-inspired goodies. Miniature bath bombs, eye masks, nail varnishes, and lipsticks referencing each of the four houses will feature along with a special Voldemort-themed eyeshadow brush.

Boots has been on the Harry Potter hype for quite some time. In 2018, the brand launched a Harry Potter beauty range encompassing house eyeshadow palettes, makeup brushes in the shape of wands, colour-changing lipsticks, Hedwig hand cream, and a Golden Snitch bath bomb. In short, it was the best thing to ever hit the British high street.

An advent calendar full of similar essentials was the natural next step. If you're already excitedly planning your purchase, there are two dates you need to know. From Oct. 1, you'll be able to buy the advent calendar online. But an in-store purchase will have to wait until Nov. 4. I've reached out to Boots to confirm which stores will stock the calendar, and will update as soon as I hear back.

This is believed to be the first beauty advent calendar based on the wizarding world. It's not the first Potter-inspired advent calendar, however. Last Christmas, Asda released a jewellery-themed version that allowed you to create your very own charm bracelet. Inside was a dainty silver bracelet, 12 charms, three beads, and nine rings. Of course, several iconic Hogwarts symbols made an appearance too.

2011 marked the last time the world saw Harry, Ron, Hermione, and co on the big screen. But, despite almost a decade passing since the final film, the love for Harry Potter has not slowed down one iota. In fact, it seems to be ramping up once again thanks to a bunch of brand collaborations.

Boots' advent calendar will be releasing at a similar time as Pandora's riddikulus-ly brilliant collection. On Nov. 28, the famed jewellery brand will launch a hand-finished range featuring a special Harry Potter-themed bracelet along with pendants and charms. Details of that collaboration are also currently under wraps, so you'll have to guess which characters and symbols Pandora's design team has chosen to recreate. Footwear hasn't escaped the obsession either. Earlier this year, Vans gave its classic styles the Harry Potter treatment.

UK fans also have the chance to relive the magic at any time by visiting the Warner Bros. Studio Tour. Halloween will mark the next big wizarding event. On Oct. 24, 25, and 26, fans can enjoy a spooky feast in the real-life Great Hall followed by dessert in the Forbidden Forest. Death eaters and magical creatures including Buckbeak and Aragog will be in attendance throughout the night, making the £240 price tag slightly more bearable.

For now, all you can do is swot up on your Harry Potter knowledge by reading all the books and watching all the films back-to-back. What a dreamy weekend plan.