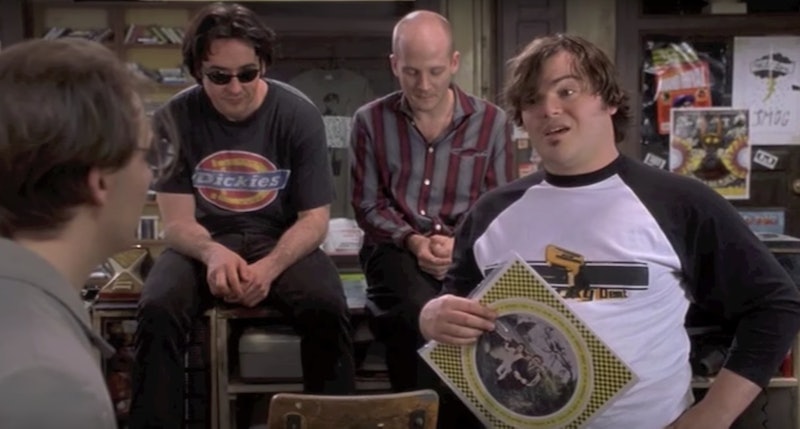 Another classic movie is getting the remake treatment. On Thursday, Deadline reported that a High Fidelity TV series is in the works. And while both vinyl and heartbreak will apparently still be big parts of the story, the show is switching things up with the protagonist: The lead character will not be a dude. Inspired by the 2000 movie High Fidelity, which was based on Nick Horby's 1995 novel High Fidelity, this TV show will be about a woman who runs a record store and breaks the fourth wall when she feels like opening up about her love life. Bustle reached out to ABC Signature Studios for comment about the project, but has not yet received a response.

The High Fidelity reboot would be part of Disney’s streaming service. And unlike the John Cusack flick, it shall be "family-friendly," i.e., there will be far less cuss words in this version. According to Deadline, writers Veronica West and Sarah Kucserka, production company Midnight Radio, and ABC Signature Studios are behind the project. West and Kuscerka have worked together on a number of beloved series, including Hart of Dixie and Ugly Betty. Additionally, Midnight Radio team member Scott Rosenberg co-wrote the High Fidelity film.

In Sept. 2017, Deadline reported that Disney's streaming service is slated to launch in 2019, and the library will include about 500 movies and 7,000 TV episodes. In addition to the existing content, the streaming service will also host several brand new shows. And now we know that one of those new series could be a program based on High Fidelity.

Say what you will about remakes, but a reboot of High Fidelity that is centered around a woman who runs a record store is pretty dang cool — especially given how male-dominated the record store universe has been for so long. But that's becoming less and less the case. In a 2017 feature for Mixmag titled, "Forget High Fidelity: How Women Are Reclaiming Record Stores," Carrie Colliton of Record Store Day remarked on the sea change that's going on in the industry. She told the magazine,

"Something really exciting to me is the number of women who are opening up their own store. It's happening all over the country, and some of my favourite stores just happen to be run by women. I hear from store owners every year that their line for Record Store Day consisted of more and more women and teenage girls, coming in and shopping for themselves. And the same thing with their everyday customer."

"I think the times are changing. I'm increasingly talking to female managers and staff behind the counter, and that’s something that I definitely think can have a knock-on effect to a store’s clientele."

And the new High Fidelity will reflect the changing times.

Not only is it awesome that the love stricken music snob at the center of the story will be a woman, but it's about vinyl, y'all. Though the way we consume music is ever-changing, records hold steady. Back in 2015, Hornby addressed this in an essay he penned for Billboard about what a hypothetical High Fidelity sequel would look like. He wrote,

“And yet readers, some of them young enough never to have owned one lonely album, still seem to find the book, and a way of relating to it. This might in part be because some of the old ways have proved remarkably, bafflingly durable — there are even a few signs that ownership and physical manifestations of music are making a comeback. There is an independent record store 400 yards from my desk; it has, in the last few months, opened a new branch, in Shoreditch, London's equivalent of Brooklyn. Vinyl sales are increasing, and in the United Kingdom there are now more outlets for CDs and records than there have ever been. True, most of these are supermarkets, but not everyone, clearly, has decided that music is worthless. New vinyl is expensive, and yet Americans bought more than 9 million LPs in 2014."

It could be a while until High Fidelity the series is made available, so if you ever get impatient, do as Penny Lane from Almost Famous would do and "just go to the record store and visit your friends."

More like this
The 'Kenan & Kel' Reunion On 'SNL' Took A Dramatic Turn, Thanks To Keke Palmer
By Brad Witter
The First Trailer For 'That '90s Show' Includes So Many Nods To The Original Series
By Jack Irvin, Alyssa Lapid and Grace Wehniainen
The 'Ugly Betty' Cast Just Reunited In The Best Way
By Sam Ramsden
How The Thanksgiving Episode Of 'Gossip Girl' Changed Pop Culture History
By Gabrielle Bondi
Get Even More From Bustle — Sign Up For The Newsletter