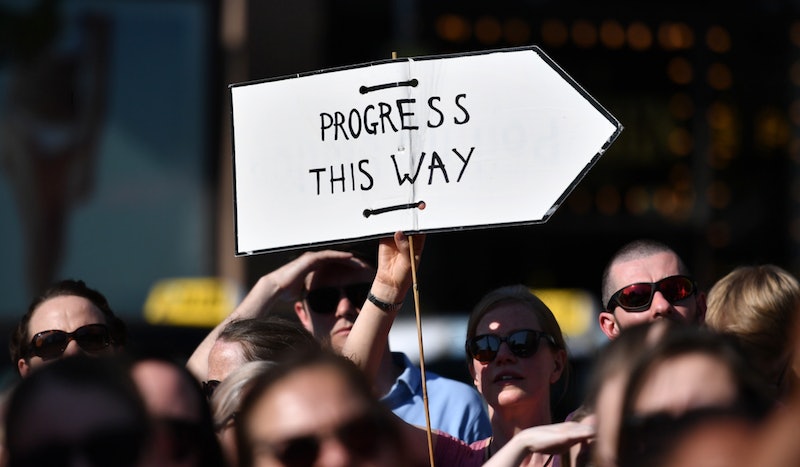 The passage of Roe v. Wade in 1973 was supposed to give all Americans access to abortion. But the reality, of course, has been far different: Women still face financial, social, and travel-related barriers when they try to terminate their pregnancies. Just like in the United States, abortion in Ireland remains restricted these days as the country adjusts to legalization.

Ireland voted in May to overturn its constitutional amendment that prohibited abortion, and legalization officially went into effect on Jan. 1. It's been less than a month since then, but some women are expressing disappointment that many of the obstacles and stigmas associated with abortion are slow to leave, according to a report from The New York Times. One barrier patients face is that few doctors provide the service. Around 200 medical providers offer the procedure out of the 4,000 who work in Ireland, per the Times. That's just 5 percent.

"I spent three days on the phone before I found both a doctor willing to do it and a clinic which had the medicine," one woman told the Times. "I felt quite scared and alone. It felt like what I imagine it was like before the referendum, like you're doing something underground and illegal."

But Ireland isn't alone. Despite abortion being legal in the U.S. for decades, only a slim minority — around 7 percent — of U.S. doctors in private practice perform abortions, according to the Guttmacher Institute.

In Ireland, part of the problem is that women's health providers have been overwhelmed for a long time. "Generally speaking, women's health services in Ireland have been underfunded for many years," Dr. Peter Boylan told the Times. "This is a new service that is coming in on top of an already existing service, which is stretched, so that's causing challenges."

Many reproductive rights advocates in the United States also point to a lack of funding, for which they hold the Hyde Amendment partially responsible. The 1976 law prohibits federal funds from going towards abortion services except under extraordinary circumstances. Just 16 states allow Medicaid and Children's Health Insurance Program (CHIP) funds to be used for abortions, according to the Guttmacher Institute, and over half of American women and girls using Medicaid and CHIP don't live in one of those states.

Another issue in Ireland is that many doctors are afraid of facing repercussions in their communities if they offer the service. "People are really afraid, I think particularly in rural parts," Dr. Caitriona Henchion told the Times. "Doctors sending their kids to the local school don't want them to be abused or shouted at because it becomes known that their mother or father is offering abortion services."

The stigma around abortion in Ireland comes partially from the fact that it is still a heavily Catholic country. Archbishop Eamon Martin — who is the Primate of All Ireland, or a top Irish religious leader — announced earlier this month that he was encouraging Catholics to fight back against legalization. The new law "must be resisted," he said, according to The Catholic Herald. This week, a priest in the county of Westmeath refused to give communion to a member of the Irish parliament who voted to repeal the abortion ban.

Ireland's new law undeniably marks an enormous step forward for women's reproductive rights in the country. But if the aftermath of legalization continues to be anything like that of the United States, Irish women and trans people who need reproductive care will continue to face abortion obstacles for decades to come.