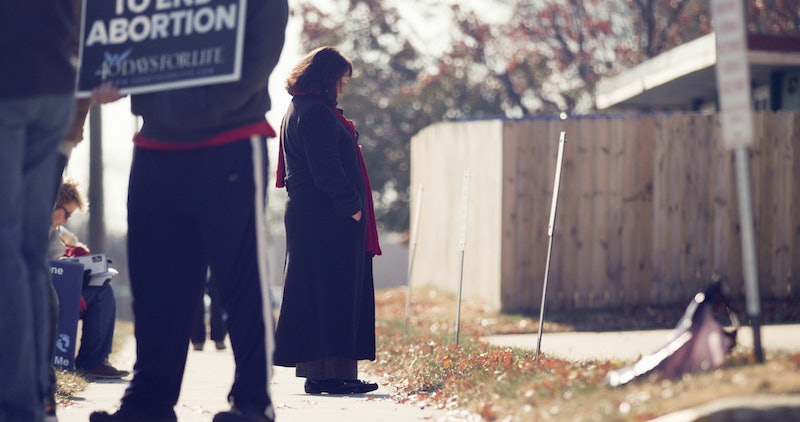 Although it is a documentary, you'd be right to predict that Abortion: Stories Women Tell leans toward the pro-choice side of the issue. That's because the HBO documentary focuses on the closing of facilities that provide abortions throughout the state of Missouri and the struggles that causes. Yet, through interviews with people who are pro-life, pro-choice, and prefer not to be defined by a side, Abortion: Stories Women Tell focuses on how abortion is an incredibly complicated and personal subject. Although many people realize why the debate surrounding abortion can't be solved with a black-and-white approach, by featuring an array of personal accounts from women, including pro-life advocates, Abortion: Stories Women Tell shows how the human side of abortion is far less simple than right or wrong.

Filmmaker Tracy Droz Tragos does not demonize either side of the abortion debate in her Abortion: Stories Women Tell, but she does show the real impacts of people protesting outside of facilities that provide abortions. Tragos also spoke directly to pro-life activists for the documentary, which is where the film shines in showing just how outrageously complex the issue of abortion is.

One of the women featured in the movie is Susan Jaramillo, who says that she is working to make Missouri the first abortion-free state in the U.S. As the introduction of the documentary shows, Roe v. Wade made abortion legal in 1973, so the state is working to undermine this Supreme Court ruling from over 40 years ago. Jaramillo actually had three abortions before becoming a pro-life advocate, which is something she openly discusses at her pro-life speaking events. While you might chalk that up to hypocrisy, Jaramillo's story and motivations go much deeper.

Religion plays a huge part in Jaramillo's stance, but the biggest takeaway I got from her story was that emotions are so tied into the conversation about abortion, they can never be removed from the equation. And even the staunchest advocates or opponents can be wildly contrasting in what they do and what they say and think.

Jaramillo's account is just one of many in Abortion: Stories Women Tell, but I think the crux of the tension that exists between pro-life and pro-choice people boils down to the argument that occurred between a young pro-life activist and a Planned Parenthood supporter that's featured in the documentary.

That's perhaps where the abortion debate becomes the most clear — pro-life activists typically believe there are no circumstances that forgive the act of abortion. While people who are pro-choice — or people who do not identify specifically as pro-life — typically think these circumstances need to be considered. As another pro-life activist, Kathy Forck, says toward the end of the documentary, "I can't believe that I am a citizen of a country that says it's OK to kill a baby ... I don't care how legal you say it is, it is not OK to kill a baby."

Yet, what the stories of the women who have had abortions or considered abortions in the HBO documentary show is that not everyone has the same religious beliefs or feels that abortion is morally wrong. And by showing that even pro-life people sometimes have conflicting messages about abortion, Abortion: Stories Women Tell ensures that the conversation won't be reduced to a simple discussion of right or wrong.

More like this
Celebrities & President Biden Are Enraged By The Leaked Roe v. Wade Decision
By Alyssa Lapid
Twitter Was Saying The Same Thing About Sam Ryder’s Surprising Eurovision Result
By El Hunt
Yomi Adegoke On The Offline Diaries & The Power Of Representation
By Jessica Morgan
The Music Industry Continues To Fail Black Women
By Precious Adesina
Get Even More From Bustle — Sign Up For The Newsletter